Why The Sphinx Nose was Destroyed ?

Originally posted by syrinx2112
reply to post by Ben81


I remember my history teacher telling me the nose is gone because of napoleons troops having cannon target practice...


They didnt practice much
their aim was really accurate on the nose .. the rest is intact
only the nose was destroyed

usualy target practice end in a mess and not much remain

posted on Oct, 15 2012 @ 05:48 PM
link
I can't remember where I heard this, but rumor has it that Alexander the great shot it off because it was African looking and they didn't want to give them credit for building the pyramids and the Sphinx. It's probably just a silly rumor, but it's not that outlandish, considering people have done a lot worse based on petty appearance differences. Of course this was before Alexander knew his ancient ancestors were African.
edit on 15-10-2012 by Barcs because: (no reason given)

posted on Oct, 15 2012 @ 06:23 PM
link
I heard everything from falling off by itself to Arabs chiseling it off to Napoleon's troops using it as target practice.

Originally posted by SLAYER69
I heard everything from falling off by itself to Arabs chiseling it off to Napoleon's troops using it as target practice.

It was the first plastic surgery of ancient times !
but like modern times .. after a while the nose always fall
edit on 10/15/2012 by Ben81 because: (no reason given)

Originally posted by nolabel
The nose was destroyed by wind/rain erosion. When the Sphinx was built the climate in the area was very different to what it is now. Previous studies have shown that it suffered from rain erosion in the past.

Haha I love the responses.. But this one takes the cake! So many folks just want to.. have a say!

Does anyone take into account that the sphinx is how old.. 4,000 years they're saying? Okay thats a decent amount of time. Yes the climate in the Sahara was once a vast oasis & utopian culture, but if you know two sense about material , you'd realize that the entire structure would have been eroded at a greater rate. This brings us back to the nose...

Fun Fact: The pyramids (most) & the sphinx were all covered in crystalline materials. I won't say which, but quartz is an example of this.

Originally posted by nolabel
The nose was destroyed by wind/rain erosion. When the Sphinx was built the climate in the area was very different to what it is now. Previous studies have shown that it suffered from rain erosion in the past.


I have a hard time with that explanation,.
Many statues around the world are only missing the nose..


Fun Fact: The pyramids (most) & the sphinx were all covered in crystalline materials. I won't say which, but quartz is an example of this.

Most were covered by limestone why do you say 'crystalline'?

posted on Oct, 15 2012 @ 11:28 PM
link
I thought it originally was a dogface like is depicted in some hyroglyphics.
In honor of the dogstar and Sirius B references.

A lion's tail has a tuft at the end.

I think it is a much smaller down-sized head from the original reshaped to more resemble a man's, so that a certain Pharoah could claim it as his own likeness for his and future generations of the dynasty.
edit on 15-10-2012 by PaperbackWriter because: spelling


Limestone is made of crystalline materials, so is most rock.


African.. Maybe the nose was a dead giveaway and the had to destroy it. I have seen a lecture online somewhere about the face on the sphinx and the guy seems to think that the face depicts a Black Africians face. Its possible I guess.

IT WAS DESTROYED BY NAPOLEON

THE SPHINX ALSO HAD A LONG BEARD, WHICH FELL OFF DURING AN EARTHQUAKE

IT WAS DESTROYED BY NAPOLEON

European visitors to Egypt prior to Napoleon's expedition had already discovered the vandalism to the Sphinx. In 1546, for example, when Dr. Pierre Belon explored Egypt, he visited "the great colossus" and noted the lost nose in his book Observations

Sketches of the Sphinx by the Dane Frederic Louis Norden, in his book Voyage d'Egypte et de Nubie, published in 1755 show the Sphinx without a nose.......image below 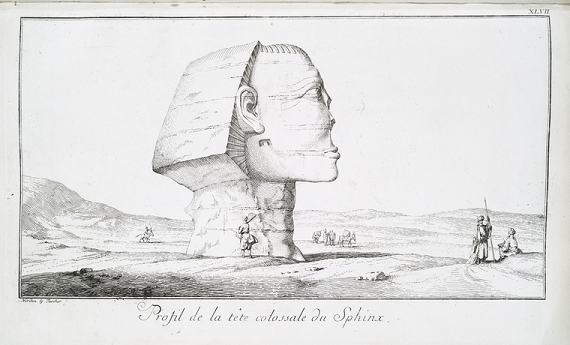 
how did you manage to debunk the debunked debunk!

Your right though.. Good evidence at least.
edit on 16-10-2012 by DarknStormy because: (no reason given)

And I have a picture to prove it!!!

And since a whole bunch of people have read the graphic novel or whatever you want to call it, it can technically be called a "peer reviewed article".


Humour aside, I believe Robert Temple has the idea that the sphinx wasn't originally a lion statue but the statue of a jackal.

He wrote a book about it. It's on the shelf to be read, but I haven't read it yet, so I can't give you more info. I'm not sure if the nose issue comes into the book.Maybe someone here has read it??

A book that verifies the existence of secret underground chambers beneath the Sphinx and demonstrates its origins as the Egyptian god of the dead, Anubis • Includes an anthology of eyewitness accounts from early travelers who explored the secret chambers before they were sealed in 1926 • Reveals that the Sphinx was originally carved as a monumental crouching Anubis, the Egyptian jackal god of the necropolis Shrouded in mystery for centuries, the Sphinx of Giza has frustrated many who have attempted to discover its original purpose. Accounts exist of the Sphinx as an oracle, as a king’s burial chamber, and as a temple for initiation into the Hermetic Mysteries. Egyptologists have argued for decades about whether there are secret chambers underneath the Sphinx, why the head-to-body ratio is out of proportion, and whose face adorns it. In The Sphinx Mystery, Robert Temple addresses the many mysteries of the Sphinx. He presents eyewitness accounts, published over a period of 281 years, of people who saw the secret chambers and even went inside them before they were sealed in 1926--accounts that had been forgotten until the author rediscovered them. He also describes his own exploration of a tunnel at the rear of the Sphinx, perhaps used for obtaining sacred divinatory dreams. Robert Temple reveals that the Sphinx was originally a monumental Anubis, the Egyptian jackal god, and that its face is that of a Middle Kingdom Pharaoh, Amenemhet II, which was a later re-carving. In addition, he provides photographic evidence of ancient sluice gate traces to demonstrate that, during the Old Kingdom, the Sphinx as Anubis sat surrounded by a moat filled with water--called Jackal Lake in the ancient Pyramid Texts--where religious ceremonies were held. He also provides evidence that the exact size and position of the Sphinx were geometrically determined in relation to the pyramids of Cheops and Chephren and that it was part of a pharaonic resurrection cult.