Curiosity Sol 3 image: "The Cup" and other anomalies...

posted on Aug, 16 2012 @ 08:51 AM
link
This intriguing image show many anomalies on the ground. In the middle of the image I found this "cup" that seem absolutely unnatural, like pottery, and a couple of other strange anomalies. 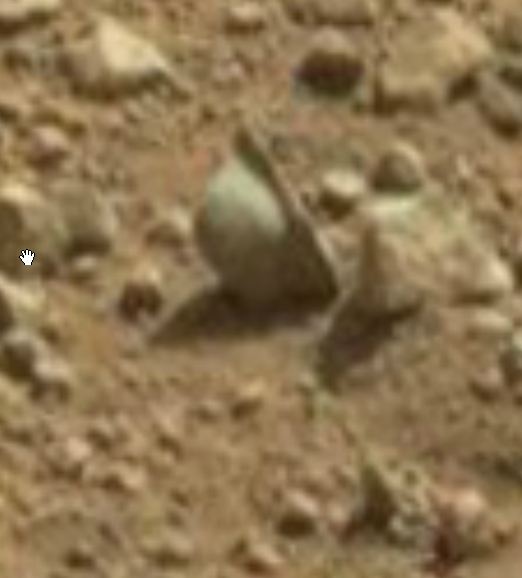 location in the Sol 3 image 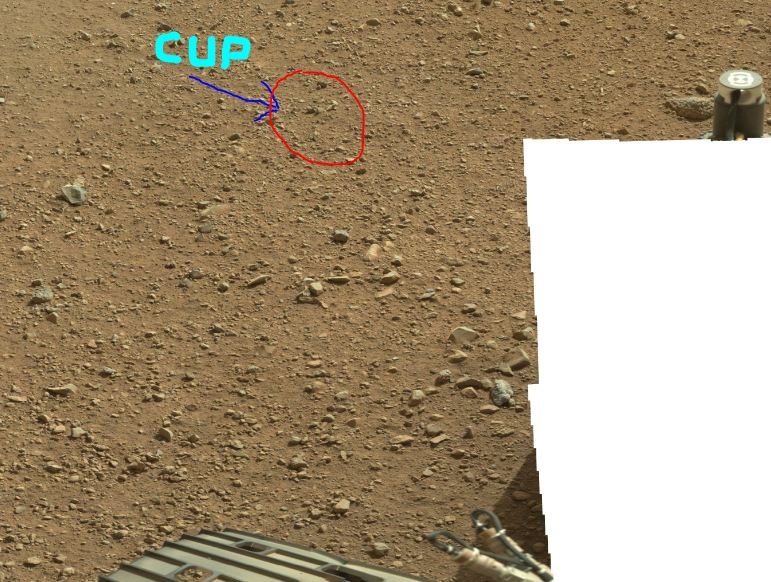 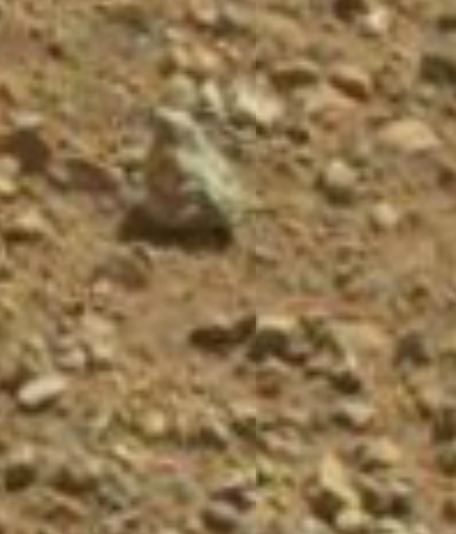 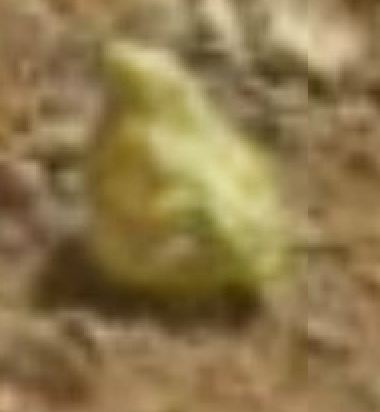 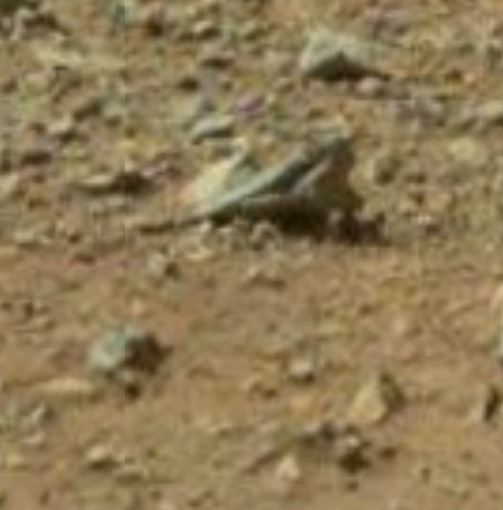 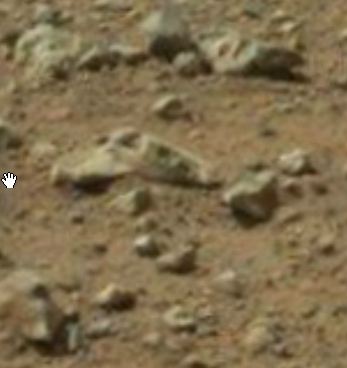 
Those damn aliens were out in the middle of Mars again partying weren't they??

We found them now!! Should have cleaned up after themselves......Go tell Barry now, he wanted to know when we found Martians!!

This is an interesing picture though Arken, thanks for always finding something that could be.......It kinda looks like a helmet also, no?? If it is a cup or a helmet, it seems kinda small, no??

Funny how we keep finding different anomolies up there isn't it??

posted on Aug, 16 2012 @ 08:57 AM
link
Don't forget about the finger that comes complete with a nail... It was found last night. My idea was to say it was a finger from a statue that broke off in a cataclysmic event. It would still make it a rock and both sides (skeptics and believers) could be correct at the same time. 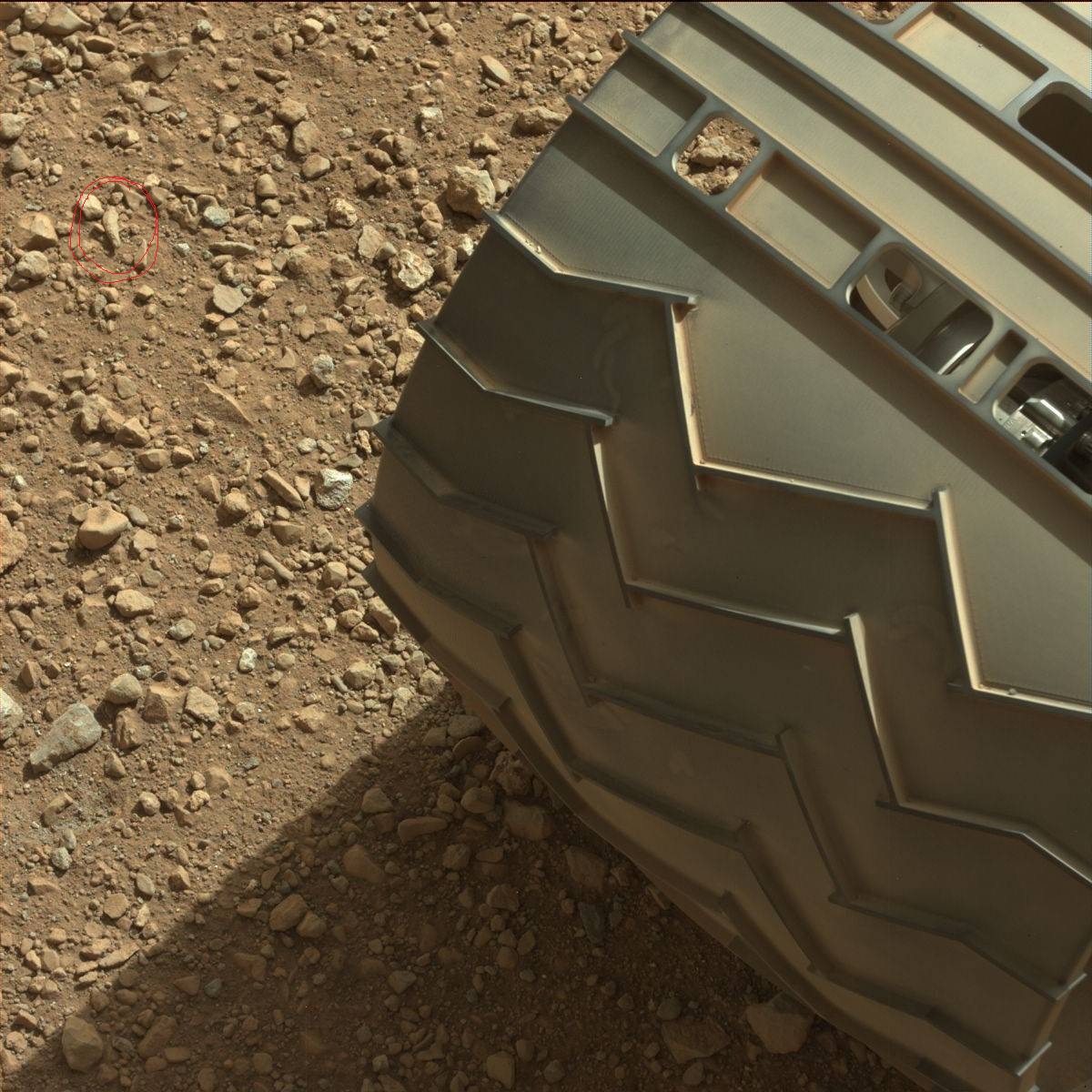 Let's say this is a cup, where in the world do you think it could have come from??

Hmmm.... let me imagine: Mars? Or the grocery right at the corner of my home.

They must have had some bets going while sitting around the campfire!!

Now all we need to do is find the knife that cut the finger off.....


That first photo seems hard to explain away. That really doesn't look natural!

Whilst I really love the fact that so many people are interested and excited about the images that Curiosity is returning to earth, I can't help but feel that a lot of people are LOOKING for anomalies and FINDING objects in the images which appear "man made". I have an open mind to the fact that Mars may have once supported life, intelligent or not. But, nearly all of the posts on ATS about the images that Curiosity has returned to earth have been about tiny rocks. Yes, tiny rocks! The "finger" image is particularly intriguing. But it is a rock!

We've all seen the images of Curiosity and its development over the years. I mention this to remind you of the physical size of the rover and the relevant scale of it to the zoomed images people are posting of "objects".

You are finding familiar earth based "objects" in dirt and gravel. Then you are zooming in on them and making them huge on your computer screen. I have done the same thing and found many anomalies. But they're just rocks!

I'd like them to be something other than what they are! But they're not.

Be patient, my friends. And while you're waiting, go into your back yard and take a really good close up look at the dirt, grass and rocks out there and post hi res zoomed images of what you found that looked like familiar man made/earthly objects. You can argue that anything you find will look man made and earthly because it is on earth. And that's a fair argument. But, what evidence do you have that it can't exist somewhere else? I can go on with quotes about proof and evidence blah blah blah, but that is pointless because it creates a never ending circle of disagreement.

To quote Carl Sagan: "We are made of Star Stuff". I agree.

It makes perfect sense that rocks on another planet close to ours look like rocks on our planet. Can anyone prove otherwise? For the record, I can't! Nor can anyone else. Does anyone really know? Well, I guess the answer to that is a resounding "NO", otherwise we wouldn't be sending probes and rovers to Mars to find out!

Peace. I look forward to the next batch of photographs, as do all of you :-)


I'm sure there will be hundreds!
Here is my 'discovery'
a coin on the martian surface?? 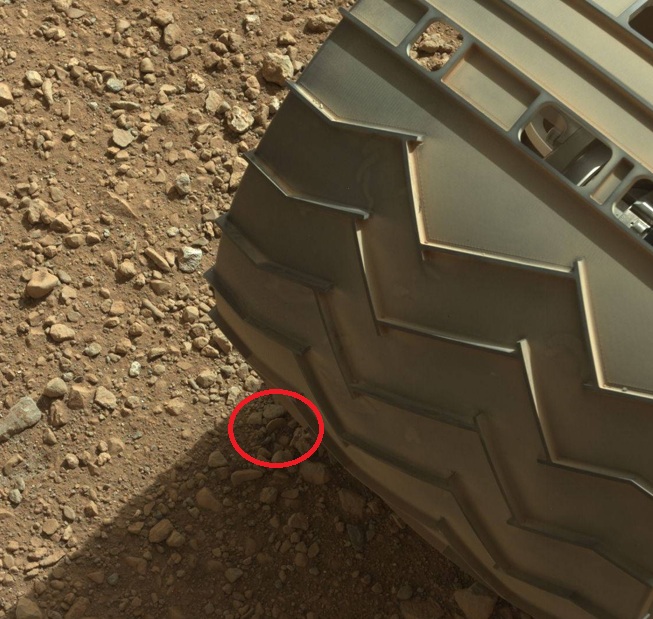 Originally posted by Kangaruex4Ewe
Don't forget about the finger that comes complete with a nail... It was found last night. My idea was to say it was a finger from a statue that broke off in a cataclysmic event. It would still make it a rock and both sides (skeptics and believers) could be correct at the same time.

clearly just a rock formation, that was the first thing i noticed in the picture 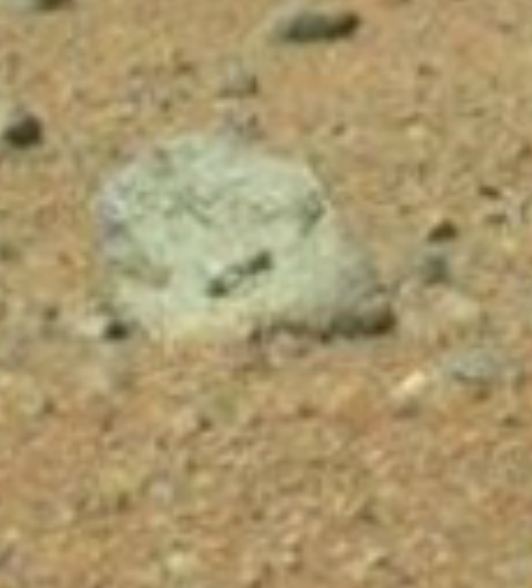 
Russians I bet even their rover runs on vodka 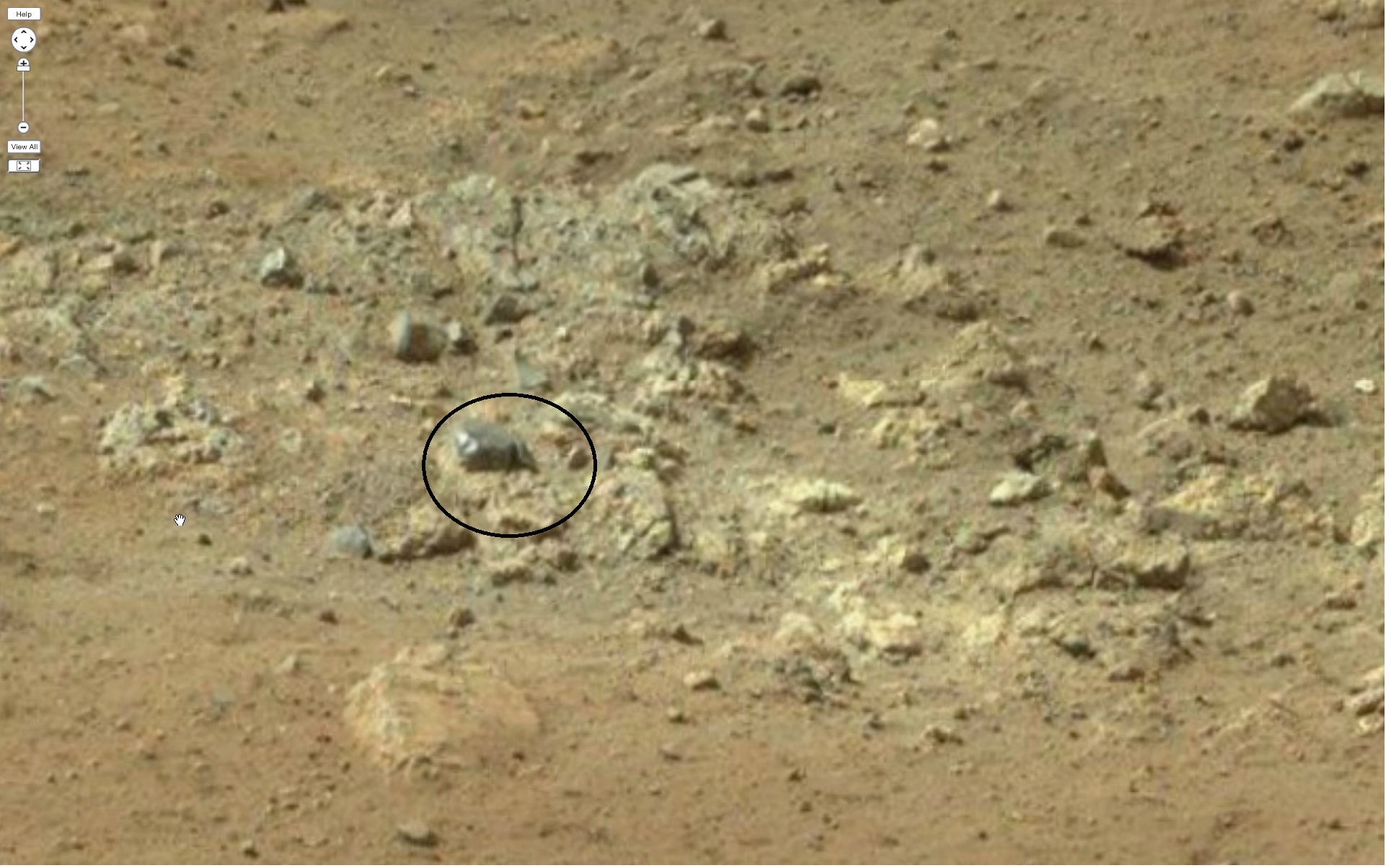 WTF is that thing? It looks nothing like the rocks all around it. It does look a lot like the head from Alien sunning itself on a rock, or at the very least has a much more organic feel than the surrounding landscape. 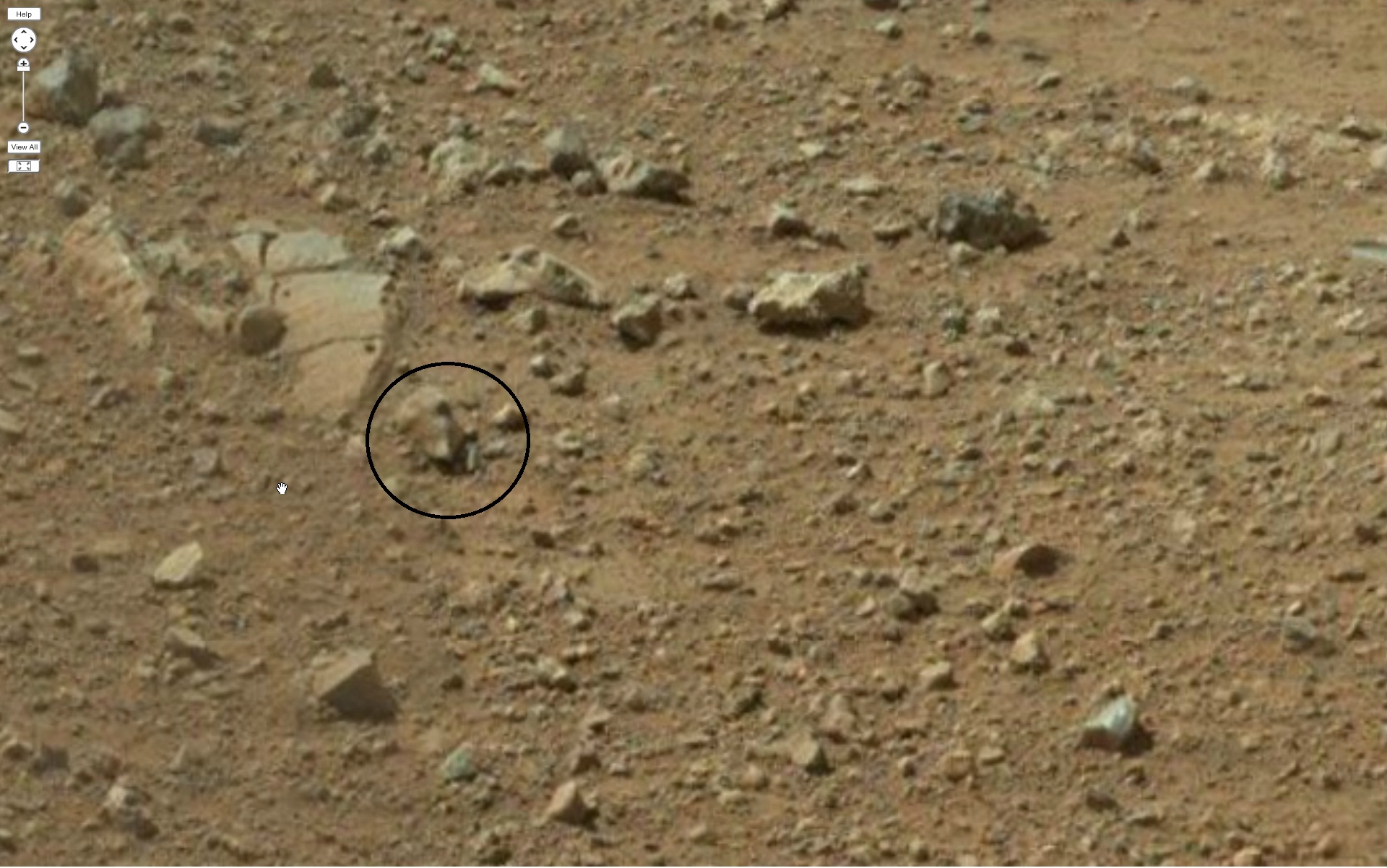 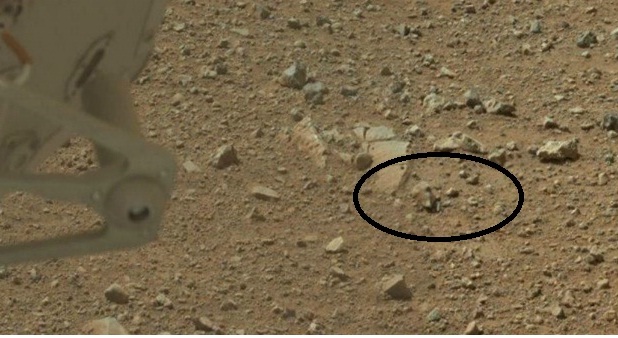 Looks a lot like a sculpture of a dog's head.

Originally posted by coyotepoet
Here are a few that I found

Maybe is related to what is described in this post
It would be cool to have a pic of that same rock with sunlight hitting it from the opposite angle..
The image with the "grayish patch" I believe is the result from the skycrane's rockets exhaust, I could be wrong, though.