posted on Aug, 5 2012 @ 10:48 AM
link
This is a rare and beautiful cumulonimbus with iridescent Pileus cloud 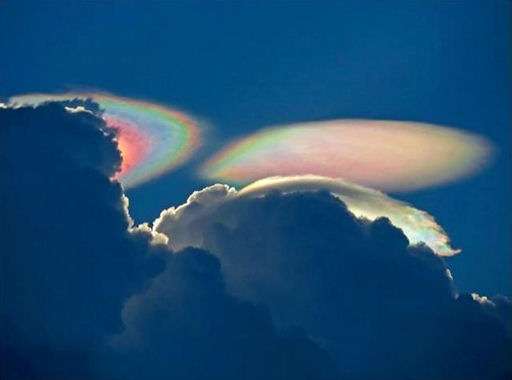 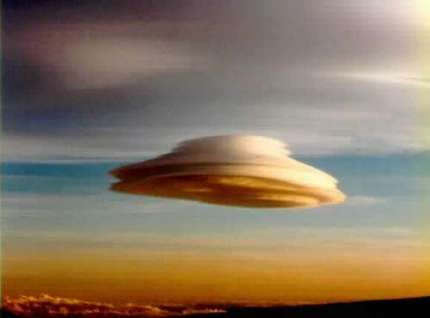 ....but while lenticular are usually formed over a mountain or a range of mountains, pileus are formed above cumulus by strong updrafts acting upon moist air at lower altitudes, causing the air to cool to its dew point. As such, they are usually indicators of severe weather, and a pileus found atop a cumulus cloud often foreshadows transformation into a cumulonimbus cloud, as it indicates a strong updraft within the cloud.

On August 1st, Ken Rotberg observed a pair of rainbow-colored saucers over Delray Beach, Florida --but they weren't UFOs. The technical term is pileus clouds.
Atmospheric optics expert Les Cowley explains how they form: "On sunny afternoons, cumulus clouds boil upwards, pushing layers of moist air above them even higher where they cool and condense to form cloud caps or 'pileus' (Latin for cap). When pileus clouds form very quickly, their water droplets tend to be all the same size--the perfect condition for iridescent colors."

"I noticed the sun dropping behind a huge storm cloud in the west and ['the saucers' appeared]," says Rotberg. "I was just amazed at what I was witnessing, watching it slowly change. There was nobody near me at the time to share it with!" Consider it shared.


I love lenticular cloud formations. They're always so beautiful and even surreal, especially around sunsets.
Thank you for the pictures.

posted on Aug, 5 2012 @ 10:55 AM
link
In meteorology, a cloud is a visible mass of liquid droplets or frozen crystals made of water or various chemicals suspended in the atmosphere above the surface of a planetary body. These suspended particles are also known as aerosols. Clouds in earth's atmosphere are studied in the cloud physics branch of meteorology. Two processes, possibly acting together, can lead to air becoming saturated: cooling the air or adding water vapor to the air. In general, precipitation will fall to the surface; an exception is virga, which evaporates before reaching the surface.

Clouds can show convective development like cumulus, appear in layered sheets such as stratus, or take the form of thin fibrous wisps, as in the case of cirrus. Prefixes are used in connection with clouds: strato- for low cumuliform-category clouds that show some stratiform characteristics, nimbo- for thick stratiform clouds that can produce moderate to heavy precipitation, alto- for middle clouds, and cirro- for high clouds. Whether or not a cloud is low, middle, or high level depends on how far above the ground its base forms.

Cloud types with significant vertical extent can form in the low or middle ranges depending on the moisture content of the air. Clouds in the troposphere have Latin names due to the popular adaptation of Luke Howard's cloud categorization system, which began to spread in popularity during December 1802. Synoptic surface weather observations use code numbers for the types of tropospheric cloud visible at each scheduled observation time based on the height and physical appearance of the clouds.

While a majority of clouds form in Earth's troposphere, there are occasions where clouds in the stratosphere and mesosphere are observed. These three main layers of the atmosphere where clouds may be seen are collectively known as the homosphere. Above this lie the thermosphere and exosphere, which together make up the heterosphere that marks the transition to outer space. Clouds have been observed on other planets and moons within the Solar System, but, due to their different temperature characteristics, they are composed of other substances such as methane, ammonia, and sulfuric acid.
en.wikipedia.org...

posted on Aug, 5 2012 @ 10:59 AM
link
they're so beautiful that they look photo-shopped (I know they're not) Nature is an amazing thing.
Thank you so much for making my day!

Originally posted by neOrevolutionist
they're so beautiful that they look photo-shopped (I know they're not) Nature is an amazing thing.
Thank you so much for making my day!

The pictures are artist illustrations.

They are posted in the UFO section to make people consider clouds when they see a UFO.

I love lenticular cloud formations. They're always so beautiful and even surreal, especially around sunsets.


Here's another good one that looks a bit saucer-ish.


Good thread mate, it's not lenticular or pileus (don't know what it is really) but always loved this cloud image.

posted on Aug, 5 2012 @ 01:43 PM
link
I've always wondered that maybe the disguise themselves as Clouds or even planes....Nobody would take a second look at a plane, would they?

Originally posted by Druscilla
reply to post by elevenaugust


I love lenticular cloud formations. They're always so beautiful and even surreal, especially around sunsets.
Thank you for the pictures.


You took the words right out of my head.
H
O
N