Pyramid Power, the hidden reason for destruction of the great pyramids?

Since the 1970s engineer Joe Parr, a member of the Great Pyramid of Giza Research Association, has written about theoretical "mass particles" that the pyramid shape attracts and traps. He states that these particles produce an orb-like energy field or "containment bubble" around any true pyramid, which shields out other energies. Using his gamma ray transducer he was able to study this energy field, which emanates from the one-third height level of the pyramid, the geometric centre (which he pinpoints as the Queen's Chamber in the Great Pyramid). He claims this centre holds three mass particles captive as long as there is space for ions to flow. He found that sun spot activity and the phases of the moon had an effect upon the intensity of a pyramid's energy field, and that at certain times of the year the field would block all electromagnetic radiation and even the force of gravity.

As I read over this, I couldn't help but think about the world around the pyramids right now. Not long ago the idea of destroying the pyramids came out, in the year 2012. The intense solar cycle 24 is due to peak sometime in 2013. Could the pyramids be on the hit list due to possible pyramid "power" complications? Did the move to destroy them come from the mythical NWO? Do they know something we don't?

In a pamphlet entitled The Pyramid and Its Relationship to Cosmic Energy, G. Patrick Flannigan, Ph.D. stated,

"the major secret of the great Pyramids of Giza, the seventh wonder of the world, is so obvious that it is hidden with the word pyramid.
We shall attempt to demonstrate that by a cosmic energy is the fire in the middle which has eluded scientists for thousands of years".

Dr Flannigan went on to say

"these energies all combined in the centre or Kings chamber area of the pyramid. The molecules or atoms in this area absorb these energies by resonance.

As the energy increases, the electron orbits start to expand. As more energy is absorbed, more expansion occurs. There would be a point at which, if there were too much energy absorbed, the atoms would disintegrate and the electrons would fly off, but the energy required would be far more than the Pyramid could concentrate.

As the energy increases, there is an increase in circulation and finally we have a highly saturated energy atmosphere in the wave bands around 10 nm. These energies also radiate outwards from the corners of the pyramid."

I couldn't find the full version of his book online, but here as some important passages. If he is right, the great pyramids could do some weird or maybe even dangerous things in the coming year.
edit on 31-7-2012 by AnarchysAngel because: (no reason given)

It was a hoax. Someone hacked the Twitter site of a Bahrani sheik called Abdellatif al-Mahmoud, a site which in itself is also a parody.

It was a joke, and Islamophobes throughout the West were caught hook, line and sinker.


I have held this as my own pet theory ever since my own meditation journys. I often wondered how to shield out all those pesky AM, FM, and microwaves... I used to be able to sense any electromagnetic field back when I was meditating a lot.

Upon seeing the "coffin thing" inside the kings chamber I knew that it wasn't to be burried in. It's a meditation bed.

I wish I could go in there and meditate without anyone else there. I could probably completely leave.

Anyway the Pyramid seems like a temple to pray in or a meditation chamber..
Makes me want to build my own some day.


You do not think the NWO would do such a thing to spark public interest in the idea?

Originally posted by AnarchysAngel
You do not think the NWO would do such a thing to spark public interest in the idea?


I assure you there is no public interest in destroying the pyramids, nor will there ever be.

I like your idea of the 'coffin' in the King's Chamber as a place of meditation. Or perhaps the sick were placed there to be healed, if the pyramid ever did possess the powers your source talks about...

This thread had interesting tidbits througout:

And just for fun, this is an interesting, entertaining take on human history, the real reality we live in, atlatians, Gods, Mars, Floods, Energy Grids and Pyramids, AKA the merkaba.


It's not quite as simple as that. There was every reason to believe what turned out to be a hoax. If you will remember, the Taliban destroyed Buddhist statues in Afghanistan, and Islamist radicals frequently call for destroying anything they consider sacrilege, even their own stuff. Here's a picture of them destroying a shrine in Timbuktu: 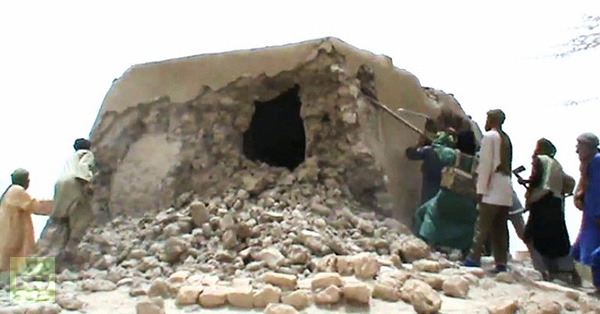 A spokesman for the Ansar Dine group, Oumar Ould Hamaha, told AP that the organization has “divine orders” to destroy any grave that is over 20cm tall, because anything taller encourages people to direct their prayer toward the deceased, rather than to God.

Hamaha says residents of Timbuktu need to get their priorities straight and stop confusing the saints with Allah. He claims the destruction is for their own good.

But the militants aren’t solely focused on demolishing Muslim heritage; other religions have fallen victim to destruction, as well.

In 2001, the Taliban’s supreme leader issued an order against un-Islamic graven images.

Source, one of many.

So while this particular story is indeed, a hoax, as you pointed out, it is a believable hoax because Islamists have done such things before.


That's an interesting bit of information. It would seem to make sense that the western world may have used that to set the event in motion. It wouldn't be the first time we've done that. *cough* Gadaffi *cough*

Originally posted by FOXMULDER147
I assure you there is no public interest in destroying the pyramids, nor will there ever be.

Well, it would be pretty stupid for Egypt to allow that to happen since without ancient Egyptian artifacts there would be no tourist trade in Egypt. There's really not much of a reason to go there otherwise, and the tourost trade brings hard currency.

However, the Great Pyramid, in particular, has already been effectively "destroyed" and with it any potential use as an energy source. When completed it originally had a limestone facing that was completely smooth, not the stair stepping you see today, which is from exposing the interior structure. These white "casing stones" were removed to build Cairo. You can see a few of these stones even today on Giza and at least one other pyramid.

Another destructive element is the so called "Robber's Tunnel" dug by (you guessed it) Muslims in about the 9th century to get at the supposed treasure in the tomb. The point being that the structural integrity of the pyramid has been compromised many times, so if precision is the issue (to produce power, for example) it no longer is.

There is a great power point done by someone on ATS about the idea that the entrance to the King's Chamber was meant not to seal it forever, but grant access to it in need. I'm about to shut down for the night, but will search for that thread tomorrow. It makes a convincing case that the idea was to get back into the chamber for repairs, if necessary, lending weight to the idea of the pyramid as a power plant......

posted on Jul, 31 2012 @ 07:34 PM
link
Can anyone find a source for milli microwave or nano wave radiation? I can't find anything about it, and would love to know what a concentration of it could do.

Originally posted by FOXMULDER147
reply to post by schuyler

It was a joke that played on previous events that WERE real. With the Muslim Brotherhood now in power in Egypt, it was a perfect hoax. The joke did not "play on ignorance" at all. It wouldn't have worked had people NOT known about previous desecration carried out by extremists. It played on people's knowledge of what has already happened, including stuff that has happened in Egypt. The archaological museum in Cairo has been looted with exhibits destroyed. The Egyptian Scientific Institute was destroyed and its library burned. Zahi Hawaas was dismissed from his post as Minister of Antiquities and sentenced to prison.

Now, re: the Giza Power plant hypotheses. Here's a thread by Scott Creighton. The powerpoint presentation is in the very first post. www.abovetopsecret.com...

Originally posted by FOXMULDER147
The casing stones of the Great Pyramid came off after an earthquake. Blame God for that.

True enough. That's beside the point. a) They were still used to build Cairo and b) Insofar as the perfect dimensions of the pyramid are concerned and whatever that might have to do with it working properly as a powerplant or some other use, that perfection was destroyed by removing the stones.