Where are the ATS military supporters?

posted on Apr, 30 2012 @ 10:11 AM
link
I know you exist, I have seen your posts. But many times I just see the stars pop up on the posts of other members who support the military.

The anti-military crowd here on ATS is always very obvious. Not a thread goes by speaking about the military members, the War on Terror, Afghanistan, Iraq, Syria, Iran, North Korea, (the list goes on) where they do not come by and let their feelings known, to an almost predictable degree.

It almost is as if they can not resist another military thread to come out and and shout their opinions and how much they disagree. I've even seen some downright hateful comments from them multiple times.

But its the pro-military members, the supporters, the active duty, prior service, future service that I want to hear from. The friends and families of sailors, soldiers, airmen, marines, and guardsmen who love and support their fighting men and women that I want to see.

I placed this in the War on Terrorism forum because the War on Terrorism, in my mind, has created the divide between the pro and anti crowds to a degree that t me has not been seen since the years following the conflict in Vietnam. Many of those men had no choice to travel and fight as they were drafted, but the men and women now fighting overseas have all made the hard, hard decision to put their life n the line.

A few people here might remember from my previous posts that I have enlisted in the United States Army, have not served yet, just awaiting my ship date to training, which is approaching rapidly. That might be the reason for this thread, but its something that I have wondered since my very first days just reading ATS, long before I ever became a contributing member.

In my actual day to day life, outside of ATS, every single person who knows of my decision has been nothing but supportive, some even going out of their way to congratulate me, wish me luck and thank me for stepping to the plate where so many others will not.

But here on ATS, it seems that the pendulum swings so far in the other direction.

So I ask, ATS members, where are the supporters. Let your voice be heard.

sheepslayer247
+1 more
posted on Apr, 30 2012 @ 10:25 AM
link
I think there is a need to clarify that just because someone may be critical of the engagements our military is currently in, does not mean those people do not support the troops.

All to often a disagreement in tactics or politics surrounding a war is considered an attack against the people in uniform. This generalization does nothing but create a fine "line in the sand" that cannot be crossed, but many people straddle this line in their personal beliefs.

We all need to agree that it is ok for someone to support the troops.....yet be critical of the circumstances that created need for war.

posted on Apr, 30 2012 @ 10:25 AM
link
So you are in need of support for a decision you aren't fully secure about. Do you think hearing 10-20 more people support your decision will make you feel better about signing up for attack dog training/duty?

God forbid you take heed of the advice of others who disagree with you and the military's current purpose overseas. Maybe you have listened to what they've had to say and now you need more reassurance. Well, I hope you come back in 1 piece.


Thank you for clarifying there.
I was just thinking about adding an edit that stated just that.

I fully respect someone's opinion regarding current wars or ideology that are critical.

It is very possible for someone to disagree with the war but still show support for the men and women.

Thank you for that.

That is not the case at all, but thank you for chiming in here.
I do see your posts on many of the military threads, and am full aware of your thoughts on the matter.

thank you for the well wishes though, I honestly appreciate that!

posted on Apr, 30 2012 @ 10:31 AM
link
I support the troops. I also want them home with their loved ones and not dying far from home. I am an American but I am also a mother. I support the troops but I question if their bosses value each and every one of them as much as I do.

OldCorp
+1 more
posted on Apr, 30 2012 @ 10:31 AM
link
I wouldn't want my son to join the military right now for anything in the world, and I say this as a Marine that is proud of his service under President Reagan. I mention that specifically, because every combat action since his term, and my service, has been to advance a Globalist agenda and not to protect our country. It really pisses me off to see my brothers coming home in body bags because some Ahole wanted to raise the price of gas (or get juicy government contracts for his company, *cough cough Cheney *cough Halliburton.)

In fact, I can't think of a single member of the military who is "pro-war." I was never in combat myself, but I've heard the stories from those who were, and it's true: War is Hell. Douglas MacArthur once famously said that all warriors pray above all else for peace.

Since you were accepted into the service, I can only assume that you are a man responsible for his own decisions. When you take the Oath of Enlistment (if you haven't already) pay particular attention to it. You are not swearing loyalty to a President, you are swearing it to the Constitution. You swear that you will defend it from ALL enemies, foreign and domestic. That oath, and the Uniform Code of Military Justice, requires that you refuse any order that you know to be unlawful; but here's where you need to be careful. If you refuse an order, you could be charged with mutiny. Mutiny during wartime is an offense punishable by death. So if you choose to stand up and say "No," you had better be prepared to hang your life on the outcome.

You should check out Oath Keepers.

My friend, I said I would not want my son to join the military right now. I would have given you the same advice had I known; but it is too late now. As long as you serve with Honor, you will have nothing to be ashamed of, and no man will ever be able to criticize you for it. Serve your country with Honor, and we will be proud to welcome you into our Brotherhood.

While there are the negative people out there that like to trash talk the military, I just ignore it. They fail to realize one little thing. As bad as the military industrial complex is, without the US military, just imagine how much worse our lives would be if we did not have it. This is a double edged sword here, damned if we do, damned if we do not.

At the end of the day, regardless of everything else in the world, I am glad that we have the military that we have and to know they are there.

I question if their bosses value each and every one of them as much as I do.


No, they do not give a crap about any of them, there just instruments to be used at their disposal. These are the same pigs that would order to drop a nuke on their own homeland.
edit on 30-4-2012 by Evanzsayz because: (no reason given) 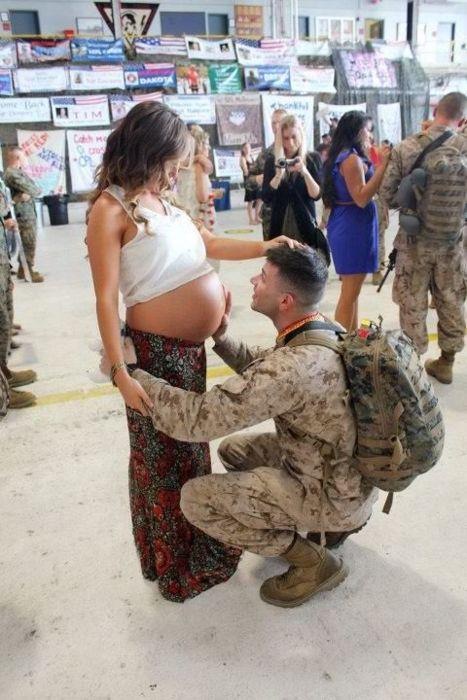 We are always here sometimes you just can't see us.

When you are right you don't have to yell as loud!


I just cant wrap my head around the term acceptable losses. Acceptable to whom?

I love the picture of the big baby belly and service man dad. A reminder that these guys and gals are real people with real lives. There are somethings in life that can not be replaced or fixed.


Words cant describe the beauty of that picture.

posted on Apr, 30 2012 @ 10:58 AM
link
So you've seen downright nasty comments concerning the Military huh? You're getting sick of people complaining about the Military invading a Country and killing innocent Men, Women and children?

But then we found out the truth....

I will not stand behind a corrupt government...we Americans are sick of all these Material Driven wars.

I am sick of hearing about little johnny having no other recourse for college other then the military right now. How can you murder someone against false pretenses so you can go to college. The kid you murdered probably wanted the same thing. By enlisting and going back your backing up the lie they used to get there. There is absolutely no reason to be in the Wars we're in now!

Again...the White house is very corrupt. Big Oil, Wall Street, huge Corps...they've taken over and Bush and Obama have accelerated their plan. Just look at whose benefiting from all these Wars. We the people need to be heard .... For instance.. we called the WH and told them NO to TARP...they shut the phones down and Bush threatened Congressional Martial Law. That's corrupt! That's a dictatorship!

How do we stop them? We stop going over to Rich oil and other Earth metals and material Countries and stop killing in the name of.....

There's also been a lot of Military guys right here in the US....they stand side by side w/ the Para-military Police force and intimidate the crap out of us. Just google Military excersizes and Military presence....you'll find pages and pages of examples. There has been threads started asking all Military personnel...if they ask you to turn on the American Public in case of war ...would you? People are that concerned and with reason.

I have no problems with the Military....men in uniform...yummy....but I do have a problem now since I woke up!


That picture definitely shows the human side of our soldiers. Thank you for sharing that, Beautiful.
I will share that as well.

Cavscout,
Always known you were here.
Thanks for chiming in, and for your service.

I am a Military Recruiter and would like to clear up some misconceptions.

From that point on I found out that it'd be best to just stay away from the subject.

I've just come to accept that everyone has very passionate feelings on the military, both for and against, and I'd rather not be involved in the mudslinging.


But fear not OP, there are supporters.