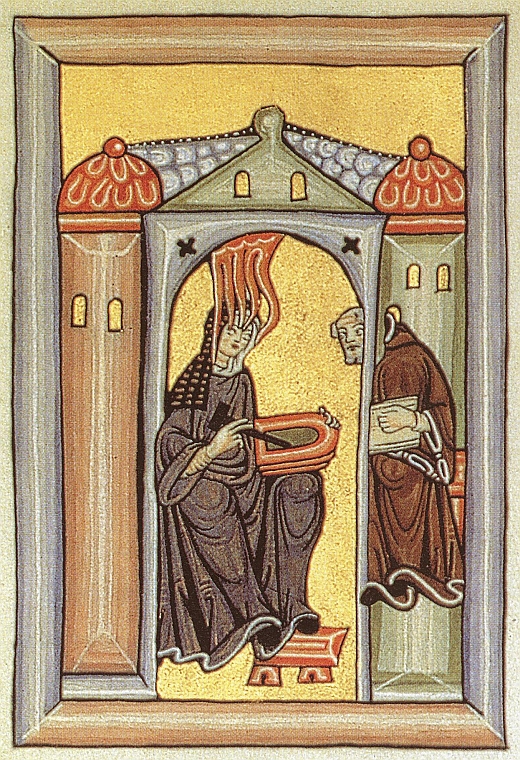 "This happened in AD 1141 when I was 42 years and 7 months old: A fiery light, of the greatest flashing brightness, coming out of a cloudless sky, flooded my entire mind and so inflamed my whole heart and my whole breast like a flame — yet it was not blazing but glowing hot, as the sun makes anything on which its rays fall hot.."


Look at that picture. Just look at it!

To me it looks like some kind of alien tentacles invading her mind. Or maybe some Cthulhu-esque creature from beyond the screaming void. Painted by a medieval nun named Abbess Hildegard of Bingen.

It is a very unusual medieval picture, I've never quite seen anything like it, so I wanted to get the impressions of the ATS brain-trust. Her description could be read as a general mystical experience, but something about the way it it is written ("coming out of a cloudless sky...) plus the alien-tentacle-type depiction, also suggests an anlien encounter of some kind.

Here is another picture by Hildegard titled, "The Universe." More tentacles and bizzare shapes. 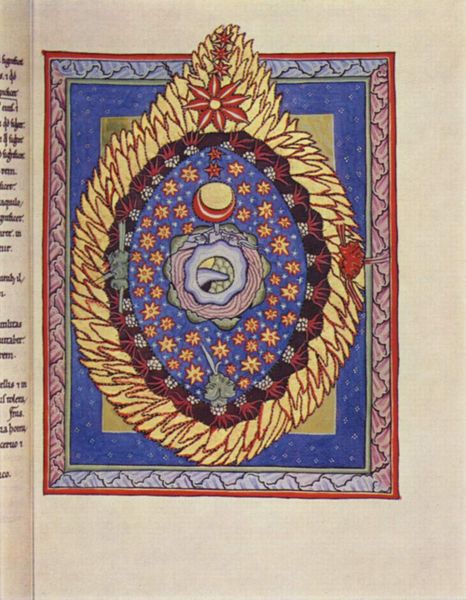 What does ATS think? Medieval alien encounter? Schizophrenia? Garden-variety medieval religious experience?
edit on 4/12/2012 by FailedProphet because: (no reason given)

posted on Apr, 12 2012 @ 02:13 PM
link
It also looks like a flag or banner hanging from the arch which would have been common.
I don't think it's alien related.

Originally posted by GmoS719
It also looks like a flag or banner hanging from the arch which would have been common.
I don't think it's alien related.

This is what I was thinking, and what it looks exactly like. It's placement is slightly weird looking though. Not being centered in the arch and kind of all over the person sitting there. Maybe it is just an artist of limited skill...

She's obviously not the most skilled artist. I'm thinking more like tongues of flame than tentacles. I think she would have mentioned tentacles instead of flames if that were the case. And probably have been somewhat more freaked-out....

ETA: She seems to have invented a 1940s style radio, according to the first picture. Yeh... I don't think I'd put much stock in her representational skills....


I agree w/ you. It does seem odd. The glowing light like the hot sun.... An engine might be glowing like the sun and perception is that it's hot. Coming out of the sky and yes... They do seem to be floating....was anything mentioned concerning this? Off- handed remark?

The medieval artists weren't so great with perspective and proportion, but I still find it a beautiful pic. Good find.

posted on Apr, 12 2012 @ 03:10 PM
link
From the description,it sounds like the onset of a really strong migrane.
I have had a few when I was younger,it did feel like fire invading my head.

But I have not received the visions that I saw in dreams, neither while I was sleeping nor in a frenzy; nor with bodily eyes nor with the ears of the outer person nor in hidden places. But I received them while waking and attentive, in a clear mind, with the eyes and ears of the inner person, in open places, according to God’s will.

I do however, find it interesting that the guy looking in on her seems to be floating.

This is an explanation of the picture from a person who claims to have been Hildegard in a previous life:

"The hanging over my head : should be the flash / the vision/ the inspiration of the source. These inspirations made a lot of people afraid, so it's drew in red like flames... devil..."

("The source" is what she calls where we come from and where we go to in between incarnations. She says it is both a place and a thing. What some people would call heaven or god)

"In my hands I hold a small shrine, which I use at that moment as a bowl, and I stir with a spoon in it, for making the healing formula which I got from the source."

(Her native language is German, and the best translation she can provide for the word "shrine" is that it was a religious item of high esteem).

She also says about the look on Volmar's face: You're shocked about the abuse of the sacral shrine, and I called you to come for writing down the recipe of it.

(She claims that I was Volmar in that incarnation)

If anyone has any other questions I will ask her.