"Civilian Inmate Labor Program" - will we all be a part of forced labor camps?

posted on Nov, 1 2011 @ 10:24 PM
link
I recently downloaded a copy of the military's Army Regulation 210–35 titled "Civilian Inmate Labor Program" and I wanted to share a little of what it contains, as well as my thoughts.

**my note: please look at the chart carefully. You will notice that it makes mention of PRISON CAMP, not just an inmate prison camp or a civilian inmate camp!** 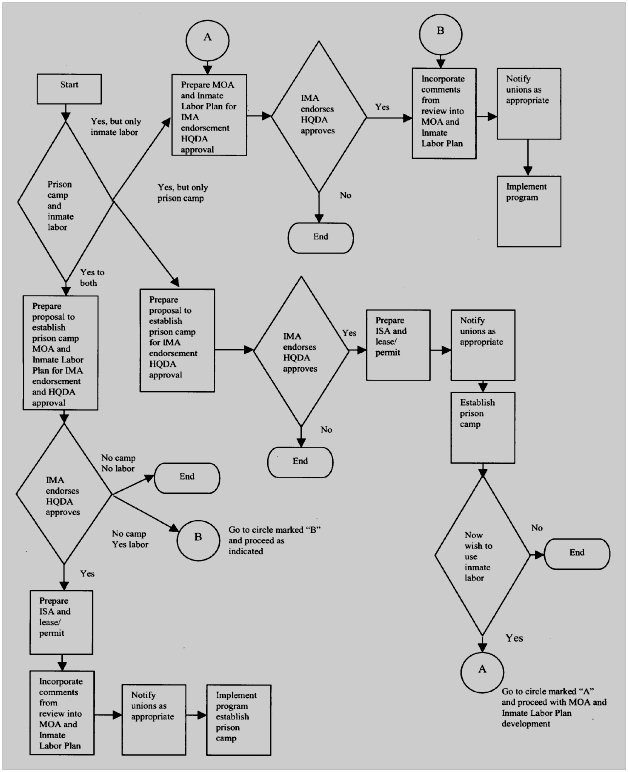 “Chapter 2 Establishing Installation Civilian Inmate Labor Programs 2–1. Policy statement
a. With a few exceptions, the Army’s Civilian Inmate Labor Program is currently limited to using inmates from
facilities under the control of the Federal Bureau of Prisons (FBOP). Section 4125(a), Title 18, United States Code
allows the Attorney General to make available to other Federal agencies the services of Federal inmates and defines the types of services inmates can perform. The FBOP provides civilian inmate labor free of charge to the Army.”

**my note: So what exactly constitutes those “few exceptions”?**

So as I read further in to this doctrine I came across the criteria established for these so called “camps” and I have to admit I laughed when I saw this. These are the types of prisoners they will NOT accept:

1. Prisoners that are significantly in the public eye.
2. Prisoners convicted of any of the following offenses: sexual misconduct (IE rape, child molestation etc), arson, drug offenses (transporting or selling of illegal drugs), violent crimes (murder etc) or anyone found to be mentally incompetent or undergoing treatment for a psychiatric condition.
3. Anyone who poses a threat to the public, any principal organized crime figure, anyone deemed to be a flight risk or anyone that has been deemed a “problem” by the correctional facility.

So my question here is (laughing as I write this) what prisoners would be left? The document states they have to be a low level security inmate so petty criminals can be used and that’s about it.

“Civilian inmates:
Prisoners incarcerated in a Federal, State, or local government penal facility. Prisoners of a military confinement
facility are not civilian inmates.”

So as the New World Order seeks to make us all “prisoners” does that mean we will all be subject to confinement and forced labor on military bases? As those who protest against the unjust treatment of our citizens, the rape and pillage of our lives, the slavery we are confined to by the top 1% of our system, are arrested and jailed will they comprise these “camps”?

edit on 1-11-2011 by DJDigitalGem because: fixed image display

posted on Nov, 1 2011 @ 10:33 PM
link
This a great find, had no idea there was an actual manual for this type of thing. Sounds very similar to the FEMA camp scenarios... Still a great find though

posted on Nov, 1 2011 @ 10:35 PM
link
It would be illogical to comply with their demands when the end result is still death and enslavement. I will not comply with the illegal and unconstitutional dictatorship that our gov is pushing for with all the propaganda.

Originally posted by AnIntellectualRedneck
My first question is this:

Ever see those few pictures of Guantanomo bay prisoners in time magazine? Their"yard time" consists of social and "sense"(ual) deprivation: wearing blackened goggles and sound muffling ear "muffs"
not technically"torture"...but how long could you go not seeing the sun/sky or talking to other inmates before you'd do anything to get outside for an hour or two(like Wisconsin by february!) ???

added: Don't kid yourself'! tougher men then you have been mentally broken without physically debilitating torture!
edit on 1-11-2011 by 46ACE because: (no reason given)


Well, that sort of is my point. Torture wouldn't take long to make a man unfit mentally.


Where did you find this manual? Do you have any proof that this is legit? Now, consider it's purpose if there was no "evil plot" . Maybe it's just about a contingency plan in case the regular prison population is displaced or something.

I served in the military and can assure you this is an actual military manual.

Isn't that no different than some other regimes
Gulag's or Stalag's

In a few years we may see Americans
going to russia, china, nth korea, and burma
asking for political asylum from their oppressive government.
don't bother coming to Australia,
both parties here are doing the monica lewinsky with the US govt.
what you are getting, flows here. i may be leaving when it goes further downhill.

That was then, and this is now, and I have been exposed to far more nefarious plans since I made that post. Most of my military service has been as an Army/Nat. Guard MP, including all of my time as an NCO and Officer. Despite all of the meetings, plans, training, drills, tabletop exercises, and actual incidents I have been involved in, I can assure you that the meaning of the term "Civilian Inmate Labor Program" has never wavered or changed in any way from the way that I explained it back in 2005.

I love a good conspiracy just as much as anyone else, and I am not a skeptic by nature, however as far as my great reserve of knowledge is aware, there is nothing sinister behind the program. It is just a way to cut costs for labor on Army installations.

Perhaps my old post was not as accurate as I now understand things to be-- the inmates would most likely be federal inmates, not those who are held by state or local charges-- however the general idea is correct.

edit on 2-11-2011 by therainmaker because: One spelling correction

I am atm looking at a video about FEMA camps.

Where it talk about this dok : armypubs.army.mil...

AnIntellectualRedneck
My first question is this:


They'll shoot your wife, or one of your kids. They won't hurt you if you are a valuable asset, but they will take everything away from you and dehumanize you.

If you think troops wouldn't do that, take a look at jail/prisoner abuse in our jails here. If you give people a taste of power, they'll run with it. They won't see you as human, but sub-human. There have been some pretty high profile court cases over people being beaten to death in prison by guards.

posted on Sep, 25 2013 @ 05:46 PM
link
So how do you people make the leep from Federal Prisoners in labor pools working on military bases to FEMA camps? It is not like this is new or a secret. Yes if you are in the Federal Prison system and you are not in for a violent crime you might get lucky end up quarted on a military base building barracks etc.

"Civilian Inmate Labor Program" - will we all be a part of forced labor camps?

only certain people of certain age can be initiated into such a world and they must all be branded with an R.F.I.D. implantable (Microchip) that will allow the people to supposedly buy and sell in that world and it will store all the persons information on it...This rfid microchip is the actual "Mark of the Beast" that is mentioned in the Holy Bible during the days of tribulations after the asteroid apocalypse!!!

Even the people that are initiated into the new world, will come to suffer, not only physically but spiritually as well, after they die for accepting a Satanic deception...People who become ill inside of those camps will also be put-down, that is killed and there will be much pestilence and many dead.

The food supply will be cut-off and the water will also be greatly polluted because of the great destruction of the asteroid aftermath.

If you would like to find-out more, please feel free to visit my threads about "The New Circular Order!!"