Marines around the world are outraged by the injuries inflicted by police on Scott Olsen at Tuesday's Occupy Oakland protests. Olsen is in a medically-induced coma after getting hit in the head by a police projectile.

The following picture is taken from the Reddit thread "How I feel, as a United States Marine, about what occurred in Oakland."

This man is not alone. In the five hours since the thread went up there have been over 600 comments.

Iamonlyhuman
+35 more
posted on Oct, 27 2011 @ 05:00 PM
link
I'm glad to see this man's brothers speaking out about this. This is one of the cleaner comments posted on the thread referenced in the story.


As a fellow (Active Duty) vet as well, though never a Marine. I can't stand this hypocritical stance that the elected officials are taking this horrible event. Though I was never a Marine, he is a brother in arms. As a family, we must stand together. I do recall that when I took my oath of enlistment that no where did it say that I will protect corporate greed. I know for one, if s**t gets out of hand, I stand with the people and not the corporate lackeys.

People are more pissed because at one point in his life, this man wrote the people of the United States a blank check, for any amount up to and including his life, and this is what he gets in return. That's why its a big deal that they did this to one of our Marines.

www.businessinsider.com
(visit the link for the full news article)
edit on 27/10/2011 by Iamonlyhuman because: (no reason given)
edit on Fri Oct 28 2011 by DontTreadOnMe because: Mod Note: Do Not Evade the Automatic Censors – Please Review This Link.

Jason88
+49 more
posted on Oct, 27 2011 @ 05:09 PM
link
As a Marine I am outraged as well. Not all cops are bad, but let's be honest - they've been using brute force against protesters who are, for the most part, peaceful. This brutality may work on traffic stops or walking the beat when few folks are around to see the police in action, but now that they've got the spotlight focused on their behavior it is clear how thuggish some police can be.

I would love for the Marine Corps to make an official statement against the hurt caused to one of their own at home. We are Marines and we are different from the other branches of service - we protect Americans not special interests. That said, the Marine Corps has a killer PR machine and supporting this cause would bolster enlistment. So I say, do it Marine Corps - stick up for your vet!

To the other branches of service, we got each other backs. No doubt.

This was one occurence I am sure no one thought of when this all began to play out.

What happened to this one man could very well change the results of this whole movement.

I now truly believe that when we look back, as informed people, we will remember what one thing changed the event from being almost dismissed and ridiculed to being taken very seriously.

The Scott Olsen incident will go down in history, and one day we may be telling the young people what happened, and that we lived it.
edit on 27-10-2011 by KingAtlas because: G&S

Originally posted by KingAtlas
What happened to this one man could very well change the results of this whole movement.

You know, I was just thinking that this may very well be a flashpoint. Only time will tell whether that is a good or bad thing.

posted on Oct, 27 2011 @ 05:12 PM
link
Sending him good thoughts hoping he gets better and hoping the common people of America find a peaceful resolve to this problem...


Let me dig around, but I came across a book today where to author compares OWS with the Civil Rights Movement and states that police brutality is the catalyst for true movement to take off. So, in theory if this is a flash point and we're following a similar model to the Civil Rights Movements, then yes - OWS just got official and is going nowhere until change happens.

ETA: This is from CNN, but same sentiment I read early in an online snippet from a book.

The great movements of the 1960s in civil rights, women's rights, and opposition to the Vietnam War were narrowly focused, well organized, strategically brilliant, and, while attracting large numbers of people, managed by people who took on authority roles and made essential decisions, albeit often with significant consultative processes.

They all used their share of extreme measures, but all were directed toward capturing the attention and support of people on the sidelines. Violence, when it surfaced at all, was perpetrated by the system, with the protesters having adroitly stimulated the establishment powers to overreact, thus generating more popular support for their cause.

The over-the-top response by law enforcement to nonviolent civil rights protests was so embarrassing to Northern liberals like me that we had to get involved and provide the civil rights cause the additional personpower, financial resources and political clout to create change.

posted on Oct, 27 2011 @ 05:23 PM
link
great to hear.
if this guy dies i dont doubt that would spark the powderkeg.. but then again it wouldnt suprise me if people sat down and took it considering how many people just dont care about their rights anymore.
to me this whole event wether it be in australia or america or anywhere has shown that western nations are in no way free (not that i didnt know this before). but its now obvious and people still dont care, they still sit down with their eyes closed. what the hell?
are people really that oppressed?

posted on Oct, 27 2011 @ 05:24 PM
link
I can imagine some of the cops were excited and scared at the same time not being faced with that kind of situation before. Then they're armed and probably most have never used grenades on people before and so get a power trip when they are allowed to use them and get away with it.

There must be some kind of psychological thing in humans when we've been given power our inner evil comes out and this is a prime example of it.

TechniXcality
+5 more
posted on Oct, 27 2011 @ 05:26 PM
link
To the police of oakland and to those police involved in such gross abuses, as led zeppelin so graciously put it,"YOU’RE TIME IS GONNA COME".
edit on 27-10-2011 by TechniXcality because: (no reason given) 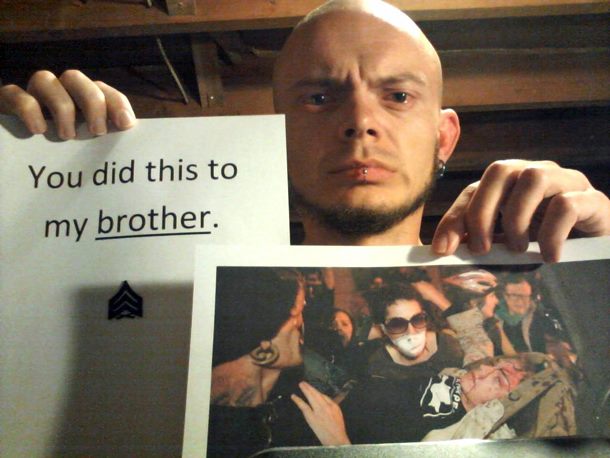 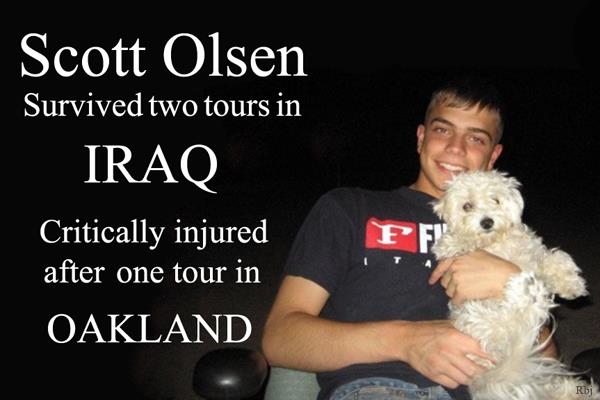 posted on Oct, 27 2011 @ 05:32 PM
link
I hope this young Marine has a speedy and complete recovery. If he does not one must wonder if the name Scott Olsen will echo through history like the name Crispus Attucks.

That whole "freedom" thing is kind of a myth...sadly

Originally posted by ShortMemory
are people really that oppressed?

No, people are really still that comfortable. You just watch as more and more people lose their jobs, savings, retirement, etc. how "vocal" the populace will become. People will rant on the establishment and the establishment will respond with increasing "passion". It's what's known as a viscous circle.

TinkerHaus
+11 more
posted on Oct, 27 2011 @ 05:37 PM
link
I just wanted to post this article about Scott Olsen's condition - saw it pass across my ticker while reading this thread.

His condition has been upgraded to "fair." And he is awaiting surgery, although I'm not sure exactly what the procedure will be.

Often times with cerebral edema they will drain the cerebrospinal fluid to relieve pressure. They will not say if he has regained consciousness and they are not sure whether or not he will fully recover. There is a possibility of permanent brain damage.


My heart goes out to Scott Olsen, this is real example of a Marine injured in the line of duty - serving his country.


Pretty sure there's enough anger to go around for both the police involved in these incidents of excessive force (which is funny that if an officer does these things it's called excessive force, when if anyone else did it it'd be called anything from assault, wreckless endangerment, assault with intent to maim or kill, etc.) and the bankers and corporations who have raped our economy and corrupted our governmental process. I won't give supposed professional leo's a pass because some of them were frightened or in an unfamiliar element.. if you can't control your own actions, what right have you to police others, or wear a badge, or carry a weapon? Officers.. police yourselves.


I am a former squid, and I will tell you now, I do not let the branch stand in the way. I consider all to be my brothers and would stand next to you any day, just give me a call.

My only complaint with you jarheads though is, you all can stop bullets pretty good. But I am sorry, when you are walking around on base, walking in front of a car is not the same as a bullet.


The " Political Leadership " of the City of Oakland Calif. and Gov. Jerry " The Clown " Brown are the ones who Control the use of the Police when it comes to Alledged "Civil Unrest " . These People are the ones the Marines should be Pointing a Finger at for the Brutal Attack by the Oakland Police on one of their Own . Where is the Outrage against those who Gave the Orders here ? Go after them and Call them on the Carpet for their Blatant " UnAmerican " Response to a Peaceful Deminstration against the Voices of the American People .
edit on 27-10-2011 by Zanti Misfit because: (no reason given)