posted on Jun, 3 2011 @ 01:51 PM
link
I open this thread under paranormal studies thinking it would be the best place for it. MOD: Please post where you think necessary, thank you.


I am only involved in this because my friend came to me with questions. I have known this man for more than 15 years, he is one of my closest friends, there is no reason not to believe him and if you were there while he was telling this to me you would understand his sincerity.

Most people out there have some sort of experience that they can not explain, it may be shadows moving out of the corner of your eye, feeling an unseen presence or a myriad of other weird and creepy things. The place I live is no doubt some sort of corridor for energies, many, many sightings and strange things have been reported over the years. Most of these go on with little or no incident. Not this time. If any one has any idea what this could have been, my friend and I would appreciate any insight.
Here we go.

My friend returns to his apt. (he works two jobs) so it was close to midnight. He took a shower and laid down for the evening. He said he became very unsettled and noticed a strong presence in the room, he ( "Paul") said aloud but not forcefully " show yourself ". There was no reaction.
At approximately 3:15 am he awoke to what he describes a sound like " traveling 80mph down the interstate with your head hanging out the window" He says the noise was deafening. There , floating above him in his bedroom was a humanoid shaped entity, almost translucent. The entity was swirling with dark yellow and golden colors, emitting light and the sound. He says it was featureless only an outline of a male human from the waist up. From the waist down he says it was just kind of swirling. This thing pinned one of ("Pauls") arms behind his head. The entity produced what "Paul" says was a very ceremonial looking dagger, slightly bigger than an average knife blade. Paul states that the dagger was not solid in appearance but also outlined a curved knife with a hilt. The entity proceeded to drive the knife into "Pauls" chest. " Paul" says he managed to get his free arm between the arm of the entity and himself just before the knife plunged into him. He says the noise drowned out his own voice, like he had no control. "Paul" says as the entity bared on him he felt unable to physically lift himself out of bed. "Paul" says he had to use sheer willpower to get the thing off of him. Screaming at it as his will broke the will of the entity. As "Paul" manged to get up the entity turned toward the connecting hallway and wisped away into nothing. The sound then subsided.

We both did a little research, I found a sleep disorder that on a few occasions seemed similar. People claimed to have been choked or claim to have their heart attacked in their sleep by some sort of creature or monster.
I think the fact that his thing woke him up, was shaped like a man wielding a weapon of human origin can rule out the sleep theory. maybe not.

If any one has any idea what could be going here, The help/info would be much appreciated.


and the vapour lower body.. 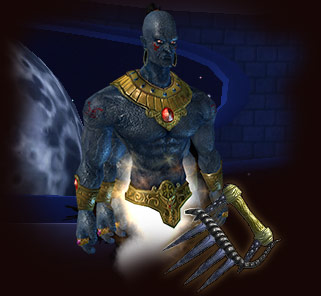 I've been a Paranormal Investigator for a good portion of my life and, even though I've had many strange experiences that are beyond explanation, I've never experienced anything quite like that.


Sounds like he used "the stranger" when rubbing that lamp.

Obviously it really made the genie mad. Maybe you should try to kill it with kindness?

I used to suffer from these regularly. They can be caused by stress and if your friend is working two jobs I imagine that could be quite stressful.

Tell him to go see a doctor for advice/medication to reduce his stress levels.


It is very curious indeed. The djinn makes sense. Isn't a djinn supposed to be summoned and controlled? I presented the idea that some one practicing very powerful magick might have something to do with it. My friend "Paul" has roots in the masonic temple. (Scottish rites) He is not involved with the masons, but his grandfather was a 33rd degree mason and his grandmother was a member of the eastern star. We don't know if this has anything to do with it but it seemed a likely source for the rituals that proceeded this type of attack.

I sense this is somehow "man made". As if "Pauls" research into his grandfathers history with the masons may have caused them to send an assassin. I'm not too sure about this as of course the research turned up very little.

Thank you for responding. maybe we can shed some light on this thing.


Thank you. this has actually come up in conversation before. A djinn would seem to be a likely explanation, but aren't they usually controlled by some sort of magick?

Originally posted by MiTS1965
It sounds like a classic hypnopompic halucination - otherwise known as Night Terrors.


I would definitely be inclined to agree with you He does have some measure of stress in his life.
One of my ex-girlfriends used to get Night terrors. She would always wake up though, sweaty and disoriented. This was while he was awake. and he had every inclination as to what was happening. This thing was more like an apparition. He said it felt like it came for his soul/energy.

posted on Jun, 3 2011 @ 03:01 PM
link
reply to post by AgentSimms
I'd agree with most of the people here. It sounds like an assasin. You should probably put up spell barriers around your house or your friends house if you can. take care alright?


Originally posted by MiTS1965
It sounds like a classic hypnopompic halucination - otherwise known as Night Terrors.

I suffered from them for years. Your son is lucky if he has no memory. Some of us remember everything and wish we didn't.


Thanks! we are ever cautious in this endeavor. we have taken some precautions. I will let you know if there are any further developments.


Originally posted by MiTS1965
It sounds like a classic hypnopompic halucination - otherwise known as Night Terrors.


Hypnopompic is when you're waking from sleep. Hypnogogic is when you're falling asleep. Both are regarded as Night Terrors. Your son sounds like he had Night Terrors without associated sleep paralysis. Thats quite rare and I feel for your son on one level because the physical reaction can be very distressing to those around him. On the other hand he didn't have the more usuall NT symptoms of being acutely aware of the horrors he was experiencing.

The whole NT experience is very misunderstood by everyone who has not experienced it personally.

I sincerely hope this stops affecting your son but for me it cursed me for the first 30 years of my life. I suffered sleep paralysis so no-one knew I was going through this and I felt I couldn't tell anyone what was happening to me lest they thought I was insane.

Best wishes to your son and I hope it stops soon. Its usually caused by stress so you might want to ask your son if there is anything bothering him.

ETA: I woke up yesterday imagining I was being attacked by a demonic figure. I actually yelled "Get off!" and woke to find myself punching empty air. Might have something to do with the stress of last Wednesday when I was made redundant from my job of 22 years and have no way of paying my mortgage as I can't find another job yet. See what I mean about stress?
edit on 6-6-2011 by MiTS1965 because: (no reason given)


Your welcome and alright I'd appreciate it.


My friend and I have taken some spiritual precautions, so far no new incidents and things have been pretty smooth lately.


I would definitely be open to suggestions or info. feel free to personal message me if you wish.

posted on Jun, 17 2011 @ 01:39 PM
link
reply to post by AgentSimms
Thats great news. Glad to hear it. I wonder if what was plaguing you ((I'd have to re read the post because its been awhile)) tried to come over to me o_o Because just last night a shadow appeared within my house and tried to drag me off of the toilet o_o It didn't suceed though because I kept a calm mind and used my positive thinking / willpower to push it off using a barrier already placed around me but yeah. #s been going down and around with me lately. Thank goodness for my positive willpower and some other barriers incase my house ones failed but yeah. I am glad to hear everything is running smoothly for you.


So he was stabbed by a ghost thing? That sounds odd, the worst thing ive seen a paranormal being do is scratch, not stab and kill. That is odd has anyone looked for other reports of things like this?


No, he was not stabbed. He managed to get his forearm up to block the knife, and used his will power to push the thing off of him. As of yet this thing has not returned. He said it felt like it was trying to steal his soul.