Government officials, advocacy groups and economists in the United States are grappling with solutions to reduce high poverty rates. The U.S. Census Bureau says that last year, the number of poor Americans was the highest since such data started being collected five decades ago.

People living in poverty in the United States in 2009 was 14.3 percent, according to the Census Bureau, nearly a full percentage point higher than the previous year.

edit on Fri Sep 17 2010 by DontTreadOnMe because: attempt to fix link

The poverty has hit the United States by design. The wealth disparity is not only expanding, but the middle class is shrinking.

Guess who's getting more rich. The globalist elite!

Guess who's getting more poor. The American people. 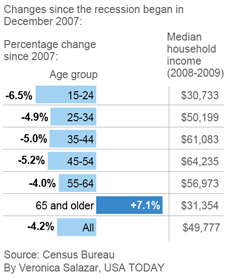 www.voanews.com
(visit the link for the full news article)

posted on Sep, 17 2010 @ 02:11 AM
link
Im in Australia a friend of mine recently married a girl from Tennessee that he was internet friends with for years she is forever going on about how life in Australia is so much better,shes in constant contact with her mother who is still over there every week there seems to be more businesses shut down,people laid of or farms in deep trouble the truth would seem to be a lot worse than what the media portrays.

posted on Sep, 17 2010 @ 02:23 AM
link
i had to chuckle at that average income for people under 24. 30,000 dollars? are you kidding me? i probably haven't made a legal 30 grand in my entire life. i grew up with rats chewing holes in the cereal box, trust me people in america have it rough too. ever took a bath before school out of a bucket? or went three days without a meal? when people say all americans are rich and fat i just wish i could take them for a tour of my neighborhood.


Poverty is avoidable, especially since this isn't a third world country. Yes, people have been forced to be tighter with their money, and yes, people have lost Jobs and unemployment is on the rise (or at least climax), but this is no reason for people to be completely bankrupt and poverty stricken.

In my opinion, I blame it on Government handouts, and the fact that people have become too cozy with Government based benefits.


First off Poverty is a disease of the mind for adults in this country. Unfortunately its a stark reality for the children of adults who have all but given their own authority over to god, government, family or other forms of social self acceptance.

There are very few actual reasons anyone should be living in poverty in this country, and the majority who are do so because of mental problems. The biggest mental problem is the belief of "i can't".

Just you wait... I'll hear all sorts of people defending their limited viewpoint and why I'm heartless.... well perhaps you wouldn't be in poverty if you cared less about what people have told you and more about your own happiness on a daily basis.

I used to be homeless myself. Until I realized that I was buying into everything that the social authorities sold me.

Once I decided to make my own decisions, be my own authority, flip off all gods except for the one inside me, only then did my life open up and fill with joy and happiness (and also massive wealth).

By all means give to charities which help children.... but take those children away from those deluded parents who have no business raising our next generation with an impoverished mindset.


Poverty is avoidable, especially since this isn't a third world country. Yes, people have been forced to be tighter with their money, and yes, people have lost Jobs and unemployment is on the rise (or at least climax), but this is no reason for people to be completely bankrupt and poverty stricken.

In my opinion, I blame it on Government handouts, and the fact that people have become too cozy with Government based benefits.

Indeed anything which puts one's sense of authority in someone elses hands is to blame....


A lot of things contributed to the growing poverty rate, including uninsured families getting wiped out by one accident or illness due to (exorbitant beyond human understanding, reason and explanation except perhaps, they are trying to kill off as many of us as they can???) medical expenses and care.

One very significant factor came when gas shot up to $4 and $5 a gallon. The shipping industry and everyone really raised prices on all products significantly and the prices did not go down along with the relief in the gas prices. The higher prices remained and income lowered or stayed the same.

Why can Brazil manage to be energy independent and we can't?

They have a whole lot more foresight than we do and they began rectifying the problem earlier.
If it doesn't happen in an elections cycle our politicians are quick to forget about it.
Gas prices...
This is why we are running in place... on borrowed fuel and time.

Poverty is avoidable, especially since this isn't a third world country.

I totally disagree. This is part of a larger much more insidious and diabolical plan.
The rich get richer and the poor stay poor and get poorer, sick and quickly die off, because of a grand design.
The society is a maze where only the privileged, and among the poor - only the very extraordinary, can make upwardly mobile progress. the vast majority are beaten down.
Elite, heritage foundation, grand old families, look back and laugh at the little people, the workers, fighting amongst themselves. Struggling to get a day off so they can recover and regain their strength, so their job isn't taken by the next, newer, desperate worker, fresh off the truck. No one cares if you fall. Push you aside and make room for the new.

Make no mistake about it. This is a plan. This is exactly how it is supposed to be working.

posted on Sep, 17 2010 @ 04:11 PM
link
As bad as things are, they could be worse. While things aren't going according to plans initiated by the current administration, it's very well assured that they won't take the blame for current conditions when it's so easy to lay the blame on the previous on.

Government handouts vs. job creation is a no-brainer. America has gotten too lazy for its own good. If Amercans really want jobs then they'll sacrifice services and stop buying products made in China and other foreign countries. And when I talk about jobs, I don't mean any "cushy-do-nothing-get-paid-extravagant-wages" job. I mean a "get-your-hands-dirty-and-wipe-the-sweat-from-your-brow" job. Just like what the Chinese are doing.

posted on Sep, 17 2010 @ 04:23 PM
link
Whenever a Republican is in office, this happens every time. We are still recovering from one being Pres for 8 years.

A simple review of history as well as current stats reveals this. So read it for yourselves!!!

I predicted this a year ago.in my many posts.

by TPTB They are systemantically bringing the middle class down to it's knees.

A little too late.

Now what do you do?

Now you have awaken.


Are you really going to stick with the my side is better than yours? Really? There is no difference between republican or democrat. They are one and the same the president is nothing more than a puppet for those really running the country. Bush was not much different than our current president.

The problem is not republican or democrat, conservative or liberal. The problem is the thought process of “choosing” the lesser of two evils when people vote. Stop voting for those not qualified to work for the public properly, stop voting for career politicians.

If there is no one worthy of your vote refuse to vote and demand better choices. If the people take charge as they should the politicians would work for us as they should instead of working for their own personal agendas.

Stop falling for this one side is better routine, they both have failed repeatedly to do what the public has asked them to do.

Just a few companies / corporations were fighting the move to outsource overseas , companies like Levi Strauss, Mindspring (became Earthlink) among others who were quietly fighting it all the way until it became too competitive to stay in business. Demand for lower cost of services and goods eventually made them join the crowd or disappear, wall-street penalized those companies who couldn't give there stockholders absurd profits not just steady decent profits.

The whole time people were pushing for this change, demanding "CHEAPER" prices but at what cost? there very own livelihood is what, every time you support product or services from overseas you are supporting the extinction of your own economy.

The fact is corporate America has brain washed people into a consumer state of mind, the part people don't have the foresight to understand is that at the cost of cheaper product you are essentially mandating that your job be either outsourced for cheaper labor to compensate for the lower price of sales or you take a pay cut. so it looks like to me they have convinced the American public that cheap is better even if you can't afford to buy it anymore (no more middle class).

I personally think what has happened is that in the rush for greed and corruption along the way someone forgot to take into account that they were shrinking the customer base, the frog in a pot boiling analogy comes to mind here.