Pilots have squawked 7700 meaning the aircraft is experiencing an undisclosed emergency. The aircraft is a Boeing E-3B and is near Oklahoma City.

The exact emergency is unknown.

Hopefully everything is ok. I checked ADS-B Exchange but don't see that flight on the radar.

posted on Sep, 28 2021 @ 09:48 PM
link
It is the friggen air force so it could be the darn coffee maker is no longer working. If it was a loss of pressurization they would have descended below 12,000 so oxygen mask would not be needed to be worn. Oxygen mask are required above 12,000 or at least that used to be the rules.

If I had to bet with a squawk of 7700 I would say probably an engine problem.

It isn't secret. There are dozens of emergencies declared every day in aviation, and unless it's posted by one of the sites that follows them and posts ATC communications you almost never find out why they declared an emergency. Even for civilian flights.

originally posted by: Zaphod58
a reply to: drewlander

It isn't secret. There are dozens of emergencies declared every day in aviation, and unless it's posted by one of the sites that follows them and posts ATC communications you almost never find out why they declared an emergency. Even for civilian flights.

While I was in the Air Force ( I worked on the flightline) we probably averaged one IFE (inflight emergency) every other day. When you fly as much as we did, that was about the average. 99.9% of those end without incident. In all of my years in the Air Force, I saw exactly ONE IFE end badly... the pilot walked away without a scratch.

That is interesting. So there is likely no reason to suspect a crew member lost their mind and blasted a hole in the side of the aircraft?
edit on 29-9-2021 by drewlander because: (no reason given)

The E-3 is a 707 based platform. They're relatively new, for the 707, but they're still 30 year old aircraft, using engines that pretty much only the Air Force still uses. That possibility is so far down the list of possible causes it's not even funny. There are also other things than pressurization problems that could cause them to descend.

posted on Sep, 29 2021 @ 07:20 AM
link
I was an FE on awacs, what was supposed to be my check ride to move out of the training squadron automatic and manual cabin pressure control failed on climb out so we had to level off (altitude was low enough) trouble shoot then return to home station.

If we had been at altitude we would have immediately descended, (primarily because it was a green crew with just a handful of instructors) to trouble shoot and then most likely land.

Flip side when I was more experienced we had smoke and fumes in the interior, we had an experienced crew so we just did left turns while on oxygen trouble shooting till we hit the point where someone was supposed to remove their mask to see if things were better.

We had a quick conference on the flight deck and decided its a training mission no need to do that lets go home.

So a number of issues could of occurred from inexperienced crew to a medium level problem, or the crew might just be exercising caution.
edit on 29-9-2021 by Irishhaf because: (no reason given)

Yea I got the Alert 7700 yesterday. "BROLLY1" made it back after dropping altitude as you'll see in the graph below. 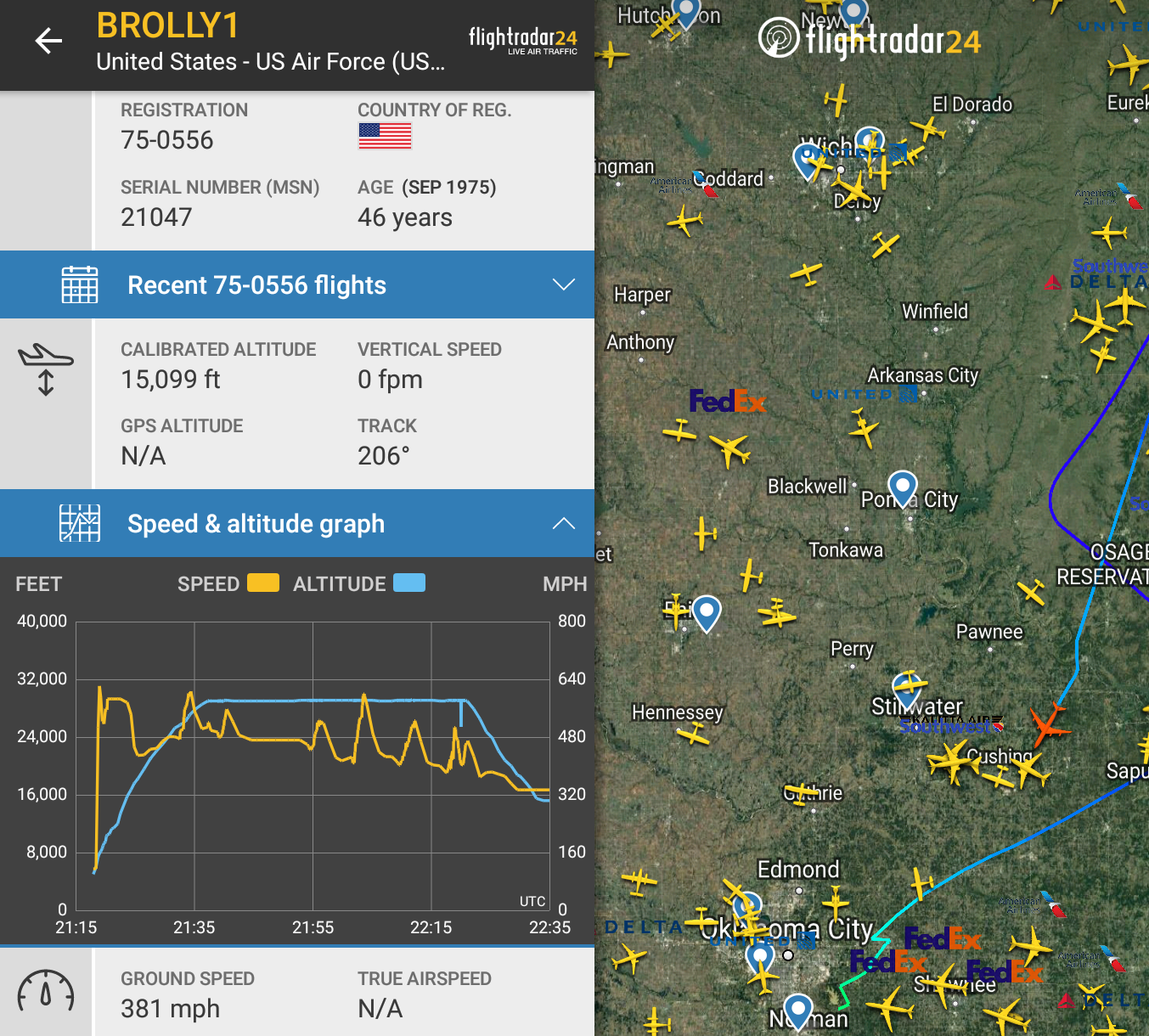 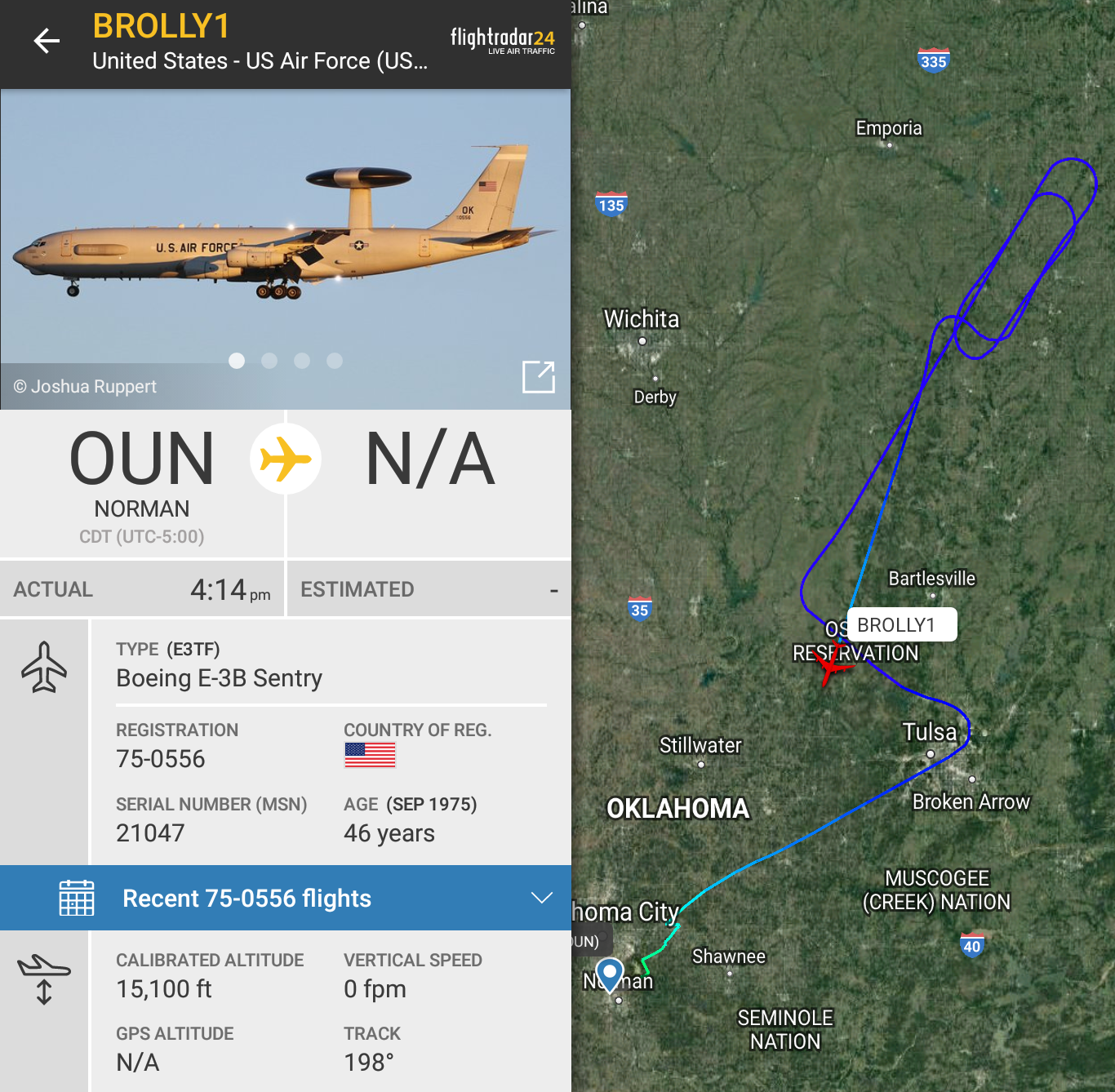 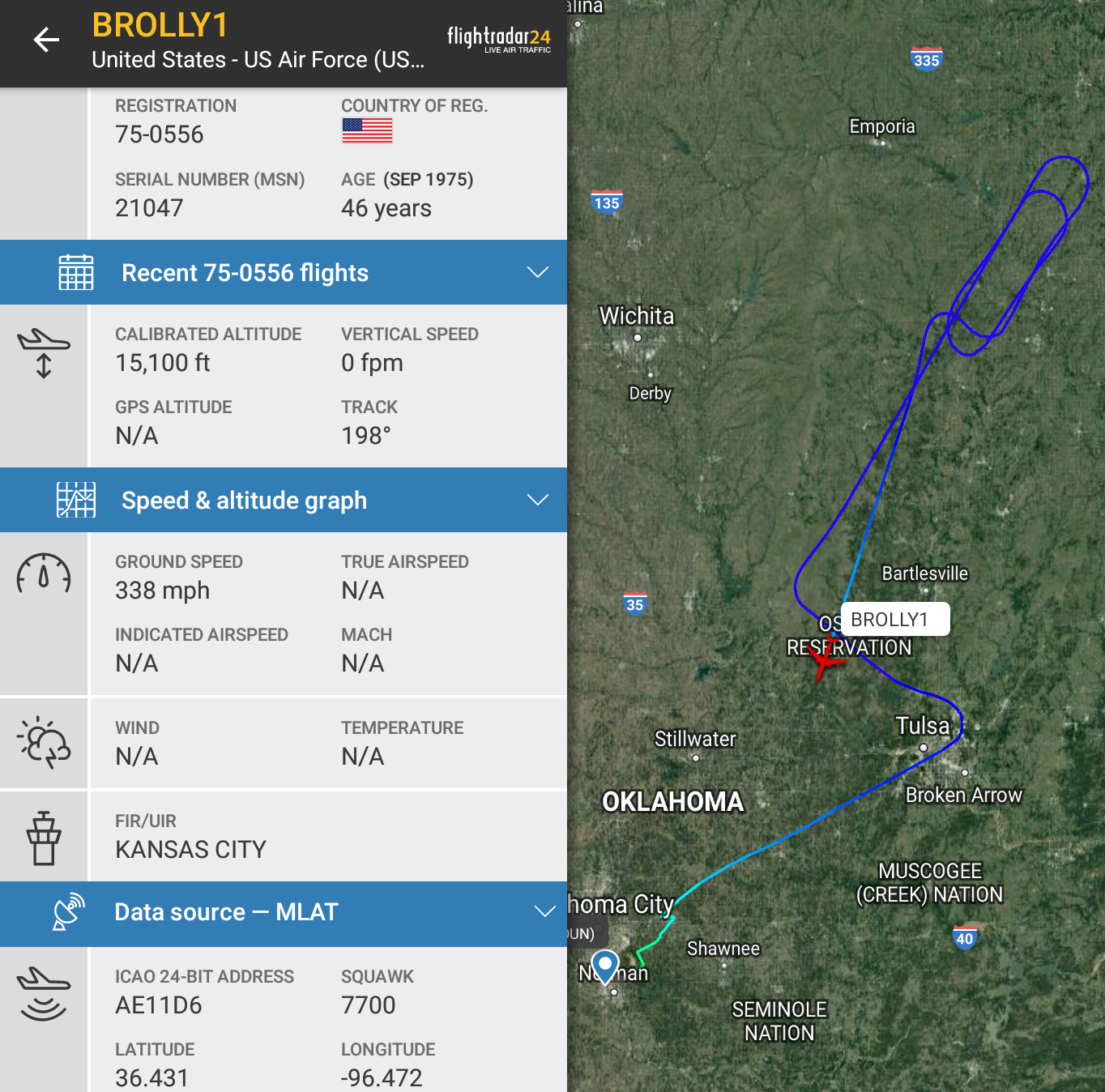 I watched it land without further incident.

Edit: not that it's unusual, but I was really impressed with the speed in which they flew getting back to Tinker Air Force Base.
edit on 29-9-2021 by Bigburgh because: (no reason given)

Given the amount of "Smell Of Smoke" wires/electrical burning smell that happens often daily on many different aircraft (and goes un announced) . That is one they don't mess with, though it usually is nothing... they will drop and return or get to the nearest landing site.

After SwissAir 211 smoke and burning smell began to be taken far more seriously. It wasn't ignored before that, but the attitude was more lax about getting back on the ground. The crew of 211 elected to continue to Halifax after the initial smoke and burning smell, instead of dumping fuel or landing overweight at Boston.

That's kind of my point. It happens often and is serious at first. Some pilot's know it's minor and will continue accordingly with caution after doing the flight checks.

I was with two other soldiers in a truck mounted shelter when the fan inside shorted and caught on fire.

Wow, that shelter filled with smoke in a heartbeat.

As I was standing by the fan, I gave the power cord a yank. Held fast!

Gave it another, more powerful yank -- thankfully it pulled free. At that moment, one of the other soldiers opened the door of the shelter and we all happily exited into fresh air.

No one was injured and other than the fan, the shelter took no damage. All boiled down to good discipline and reactions honed by effective training.