This is purely an anecdote and should not be taken as a scientific evidence. I have observed the following.

I work at a relatively large place and at my workplace I had many people in the 50-60s age group. They were rather healthy, and the workplace boss could depend on them in those rough times.

Around June/July, the Quebec government (I live in Quebec) announced a vaccination objective of "70% of the population". My work colleagues, wishing to "protect others", which I understand and respect, all went and got the double mRNA genetic therapy from Moderna; and within the following months, the 70% objective was met.

However, within the month that followed, a worryingly large ratio of those people began developing, simultaneously, cancer. I would say half of them developed cancer in all its forms. Stomach, liver, general, digestive tract, etc.

Now, I am no medicine doctor, but this sudden increase of simultaneous cancer rates, all in the same month following the mRNA therapy, worries me deeply. You have to understand, those were my friends, and some of them will now be dying from their sudden cancer.

I know correlation is not causation, so I must ask those that have higher expertise in the matter: is there any serious (and independent) report or study on a potential mutagenic effect of the mRNA "technology" on human cells, one that could lead to cancer genesis?

I am having troubles getting coherent answers from Moderna, one day seemingly implying that mRNA cannot interfere genetic makeup of cells in any way, and then the other day seemingly boasting that mRNA could be used to "correct genetic defects in the future".

As I said, I am no medicine doctor; I am merely looking for coherent answers regarding this genetic therapy, and I am rather worried about the potential correlation I seem to have witnessed.

posted on Sep, 24 2021 @ 11:32 AM
link
I am really sorry to hear this about your work colleagues
This morning (UK) I watched this interview. You will need to fast forward to the 1:17'ish mark.
It might at least give you some ideas about what is happening.
It's with Dr Ryan Cole a board certified Pathologist.
Link
Rainbows
Jane


However, within the month that followed, a worryingly large ratio of those people began developing, simultaneously, cancer. I would say half of them developed cancer in all its forms. Stomach, liver, general, digestive tract, etc.

Who knows if it is from the vaccine or from everyone that didn't get screenings during lockdown.

ADE is a thing.

Don’t get me started on the spike protein.

There are MULTIPLE aspects that make this ‘vaccine’ incredibly dangerous.

For all those uneducated out there, that want to discredit what I’m saying — one of my bestest good friends, is a doctor with 30 years of practice.

......Zaks said it took decades to sequence the human genome, which was accomplished in 2003, “And now we can do it in a week.”

Interestingly, one of the most potentially catastrophic side effects of the mRNA vaccine is its interaction with cancer cells. According to a study at New York City-based Sloan Kettering Cancer Center, the mRNA has a tendency to inactivate tumor-suppressing proteins, meaning it can promote the growth of already existing cancer cells..... 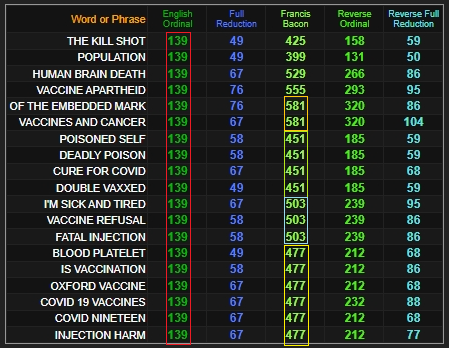 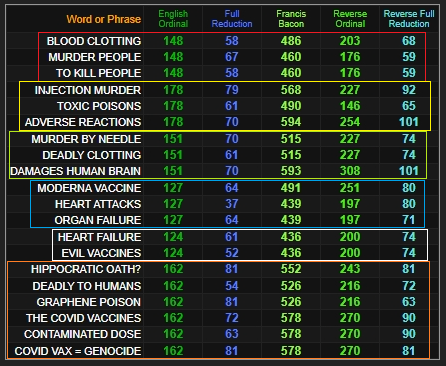 I added these to a different thread, just a few matches.. but nobody wants to look/listen.

The cure for cancer and all disease is in the Gematria code.

I am not surprised about this. We are being lied about what are the ingredients in these "mRNA" vaxs. I am sorry what happened to your work colleagues.

Our MSM will never report about the adverse reactions/Side effects they arent even reporting the protests in Aus.

originally posted by: ATruGod
Considering Cancer is one of the things They aren't checking for, We can only imagine its going to get worse...


Not only among the adults but the youth. And your right it will get worse specifically when they find out..

Thanks Jane, that is indeed an informative link. It would certainly explain a lot of things that are surfacing now.

The timestamp was appreciated too.

posted on Sep, 24 2021 @ 12:54 PM
link
Well we just lost an older vaccinated Family member to a sudden brain cancer, death was swift.
Another in our area young person had a brain tumor which disappeared on its own, I don't know how often that happens and now we have had a younger family member in his 40s died in the hospital supposedly from covid We don't yet know if he was vaccinated.
edit on 24-9-2021 by SeaWorthy because: (no reason given)

posted on Sep, 24 2021 @ 12:57 PM
link
a reply to: maya27
Most welcome.
I know many don't like/agree with this Pathologist, but he explains things very well I believe and he's very careful with his choice of words.
Rainbows
Jane

Some kind of numerology voodoo?

originally posted by: angelchemuel
a reply to: PiratesCut
Hmmm...you are right! It was working fine half an hour or so ago as I played it to get time stamp!
Very odd. My apologies.
Rainbows
Jane


I have refreshed ATS and then hit the link. It is still working for me here in the UK.

Very interesting. I have been puzzled in the past year or two before any of the covid stuff that many people were getting shingles and hepatis one friend even being hospitalized in their 70s and having been healthy her whole life.
It seems as if the immune systems of people were already being suppressed before the covid and vaccines arrived.

If you get the shot, how much energy will your immune system use to try to find out what is going on, and pheraps have to stop a lot of its functions to do it? If the molecules used in the shot are not found in nature, you get the same old plastic problem it's still pollution confounding an ecosystem albeit an internal one..

posted on Sep, 24 2021 @ 04:15 PM
link
a reply to: SeaWorthy
What I found really strange about 3-3 and half years ago was the amount of children who were getting shingles and not chicken pox. Two young children (7&4) of a client of mine both came down with it. I heard of many other reports as well. But it was just that year. I'd have to check my client notes to be sure of the year. That was here in the UK.
Rainbows
Jane