A mass shooting at a concert in Florida has left two people dead and more than 20 injured, according to reports.

The attack took place at the El Mula Banquet Hall in Miami early on Sunday morning, when three people carrying assault rifles got out of a vehicle and opened fire on the crowd. They then fled in an SUV, police said.

The Miami Herald reported the venue was being rented out for a concert. 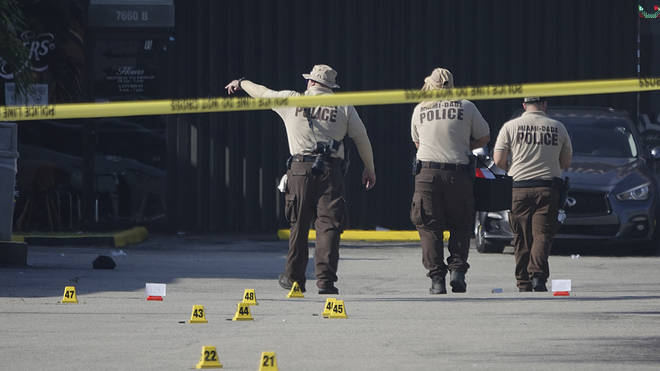 This just popped up on one of my NEWS feeds.

RIP to the poor victims.

Don't really know what to say, still learning about the incident myself.


Were these those white domestic terrorists that we have been warned about?

originally posted by: Edumakated
It wont' get much coverage as it is basically just some thugs shooting up a rap concert.... shooters black and victims black. Nothing to report here...

Mass shootings happen every day in the hood...

Let me correct you. MSM reporting it was a private banquet hall and billiards club. No a word about the shooters or victims color. Also, I can't recall the language used, but they called this another term than "mass shooting", I wish I could recall what phrase they used when I first heard it reported.

originally posted by: TerryMcGuire
a reply to: WUNK22
Nope, it's not the guns. Those three could just have easily jumped out of their car, run over the the crowd, done a bunch of stabbing and the ran back to their car making a fast getaway.


Those three could also just as easily have left the guns at home, gotten out of their car, danced along with everyone else at the concert, and gone home safely.

Nope, you're right, it's not the guns. It's the people who make the decisions.

My local news reported that it took place during "Urban Week" which gave me a good idea of what kind of violence it likely was before I even looked at the story itself. Not many pasty folks celebrating Urban Week just like there likely aren't many of the darker skinned sort seen at the Highland Games.

Did they wear googles and sun glasses too? Nobody heard voices?

You can't get a height, weight and description of the clothing, their shoes, how they held their guns, how they selected their targets? Did they have gloves on too?

Come on there are three shooters on the loose. The public won't be safe until they are arrested or killed, and nobody thinks to release a description that will last longer than they decide to keep their ski masks on?

They should pull every surveillance camera up on the route they took to enter. Chances are they didn't drive all the way there with masks on.

So much more should be done. And again there are 3 mass murderers on the loose, running loose on Florida's streets

And then we have the incredibly detailed description of the subjects' vehicle. white. nissan. pathfinder. That only describes thousands of cars. How about what state was it registered in? Any damage to the car, indicating it was involved in any other shootings (like the earlier drive by they had). Stickers, decals or other unique things. We have none of that.

We have a generic vehicle driven by 3 subjects. Utterly useless when they 1) ditched the vehicle and 2) took off their ski masks.

No wonder folks with guns are jumpy these days.
edit on 5/30/2021 by JBurns because: (no reason given)

Im not sure as to there motivations panoz77

If/when they are tracked down and apprehended we will find out as to the reasons behind the attack.

Shooting 2 people dead and injuring another 20 at a concert would seem to tick the terrorist box not matter there colour.

originally posted by: 19Bones79
a reply to: andy06shake

I laughed so hard Wet myself.

Really? One would think so. So why isn't the MSM saying as much? I wonder if skin color have anything to do with it?

The story has been covered by the BBC CNN CBS SKY and a few of the major papers.

Main steam media seem to be all over the top of it.

It was a WHITE vehicle. We know that much was white. Did the white cops falsely arrest anyone yet and stand on their necks?

I need details. The more “white on black crime like” the better it will sell. Can we just make something up?
edit on 30-5-2021 by wdkirk because: (no reason given)

No one wants to die by sweaty bullets. Bumpers for the win!

I agree, they should hunt down these black domestic terrorists with the fervor and fury with those protestors from Jan 6th, amirite?


Shooting 2 people dead and injuring another 20 at a concert would seem to tick the terrorist box not matter there colour.

My thinking as well Andy

The descriptions released read like the authorities don't want folks figuring out who they are. I know that can't be true, but the descriptions are so terrible I can't imagine why else they wouldn't release any useful information especially given the ongoing public safety threat terrorists at large pose

I don't know or care what their politics are, I just want to know what they look like so if anybody sees them they will know to not only take cover, but to notify the police immediately. As it stands now, everyone is a potential suspect based on the crappy descriptions. We have twice as much information on the guns used than the suspects, and three times as much information about the vehicle. The focus is entirely wrong here, the guns are irrelevant details (like giving you a weather report when you want the scores of last nights game) and the vehicle descriptions is mostly useless. The one bit of information that could actually save lives - the descriptions of those responsible - is conspicuously missing
edit on 5/30/2021 by JBurns because: (no reason given)

posted on May, 30 2021 @ 08:40 PM
link
a reply to: JBurns
Did we get what brand of tire was on the vehicle and whether they had white walls or just white raised lettering?


originally posted by: JBurns
No Height? Weight? Clothing? Race? Male/Female? How did they hold their guns, aimed shots? Footwear, combat boots or street shoes or basketball shoes or what?

They were wearing ski masks and hoodies. Kind of hard to identify much from that.

Source please.
Or it never happened.

Heh, for whatever reason they decide to leave out all the most basic (yet very important) details

No state, whether it had a plate at all
Nothing about the tires, appearance or brand
No info about damage to the vehicle
Whether any matching that DESC were reported stolen recently
Whether any unique decals or markings were present
The year, or anything like that

Instead, we get one that could describe likely thousands of uninvolved vehicles...white nissan pathfinder. Neighbor drive one of those? Oh no it could be one of the terrorists, since we have literally zero words to describe them with everyone is a potential suspect. Great way to create mass panic

Incredible they managed to get so much detail on those, yet can't tell us a single thing about the bad guys or anything remotely useful about the vehicle they used

The idiot MSM apparently doesn't realize that giving a description of the guns are a waste of time. Unless its a unique, gold plated .44 or something along those lines the make/type of gun is entirely useless to eliminate the ongoing public safety threat or generate leads to result in their capture/elimination

And of course telling us about a vehicle that was likely dumped and burned to a husk is just as useless, unless surveillance cams along their route shows them without masks or provides some other formerly unknown information. It doesn't do jack # for public safety

originally posted by: wdkirk
a reply to: JBurns
Did we get what brand of tire was on the vehicle and whether they had white walls or just white raised lettering?

You should hunt down all terrorists with fervour no matter there colour.

That stands to rhyme and reason does it not?

They will get whats coming in the end, there type generally do.
edit on 31-5-2021 by andy06shake because: (no reason given)

Very much so agree Andy

Just hope no more lives are lost, whether its venue attendees, shoppers, party goers or random people on the street.

I feel for the LEOs who have to suit up in armor to fix and engage with them. Even three mediocre attackers pose a threat if they get you in an ambush position

Anyhow, hope it ends peacefully so we can get some sort of explanation for what happened. I suspect they wont be taken alive however