My Two Teens Are Both Addicts

posted on May, 22 2021 @ 10:02 PM
link
I have four registered Siberian Huskies. Bellah is the mother, she has always had issues. Scared of her own shadow, not very verbal, sneaky. Max is the father, he is a true inside dog. He hates being outside unless he is loose, and then it is off to the races. The longer you chase him, the longer he will run. Ignore him, and he will return home and head straight for his crate. He has never been gone more than two hours, usually back within 30 minutes. Thinks the whole world centers around him, and very verbal.

Max and Bellah had an oops three years ago, that ended in the birth of just the two brats. My problem children are Tamar and Goliath. The are both three years old, and they are addicted to Bufo frogs. Bufo frogs are supposed to be toxic, and you can find numerous stories of the heartbreak that many canine owners have experienced, due to the death of their dogs, at the hands of Bufo frogs. So why the hell, are my two teens addicted to the darn things?

Human teens have been known to risk the hallucinatory effect of licking the Bufo frog, with the same risk of death. Won't add a link, but there is plenty of info out there on this, going back a while. I have to watch my two idiots like hawks, and trying to keep them away from the darn frogs is a true battle.

Like all teenagers, the closer I am to them physically, the more control I have over their behavior. Give any space or distance, and they will ignore me, and go after the darn frog every time. My mother has said, on numerous occasions, that we have the strangest critters that have ever existed, I was beginning to think she was right, until I found this article dated way back in 2006. I was happy to see I was not fighting this battle alone.

The Dog Who Loved to Suck on Toads
edit on 22-5-2021 by NightSkyeB4Dawn because: Clean up.

posted on May, 22 2021 @ 11:07 PM
link
Gross habit the dogs have there. At least my seven year old blind cat doesn't lick frogs...but he eats about a pound of bacon a week and he gets withdrawal if he does not get his bacon. I wonder if people can get addicted to bacon like he is?

originally posted by: rickymouse
Gross habit the dogs have there. At least my seven year old blind cat doesn't lick frogs...but he eats about a pound of bacon a week and he gets withdrawal if he does not get his bacon. I wonder if people can get addicted to bacon like he is?

Yes, I think they can.

And yes, my dogs are gross. The are darn little drug addicts, and I am ready to send them off to rehab. But my vet laughed at me when I told him I was bringing them in for rehabilitation.


originally posted by: rickymouse
Gross habit the dogs have there. At least my seven year old blind cat doesn't lick frogs...but he eats about a pound of bacon a week and he gets withdrawal if he does not get his bacon. I wonder if people can get addicted to bacon like he is?

Yes, I think they can.

And yes, my dogs are gross. The are darn little drug addicts, and I am ready to send them off to rehab. But my vet laughed at me when I told him I was bringing them in for rehabilitation.

Did you know why cats roll in catnip when you put it on the floor? It is a potent insect repellant.

I don't think that using it as an insect repellant is advisable when picking blueberries or raspberries out in the wild though if there are cougars or mountain lions in the area. I also don't suggest planting it outside by your deck if there are big cats around.

Looked up Bufo frog and found this toad. Is this what you have where you are? Big guy!

posted on May, 23 2021 @ 04:56 AM
link
The myth of kids licking cane toads or buffo frogs .. I don't even know how it started. 5-meo-dmt is not easily bioavailable via ingestion without an maoi to allow it to prevent oxidization in the digestive tract - otherwise known as ayahuasca.

Toxic, probably, especially if the bugger is being eaten and it just offloads a lot of the chemical.

Shamans would scrape it off, dry it and smoke it, though. Some tribes would smear it on open wounds and develop heightened senses.

but dmt is not something you want your dog on. but from everything I've read over the years, it's a life changing - positive - experience. just not for your pooches.. thought methinks they just want to play with the funny jumpy ball, as dmt is rather not addictive.

posted on May, 23 2021 @ 06:31 AM
link
My one dog loves Southern toads. She boops them with her snout until they hop, then she leaves them be. However, I know when she comes across a Cane toad, because she goes into hunting mode. Not sure if it's the size difference, the scent, or what. Coincidentally, she's part Husky. We're in South Florida, for what it's worth.

Southern toads look a lot like Cane toads and play an integral part in the ecosystem. Cane toads are non-native to the US, cause many problems for the environment, and should be eliminated when found.

Edit to add: I regularly see anywhere from three to two dozen Southern toads in the yard here on any given night. In the trip years we've lived here, I've only seen a handful of Cane toads.
edit on 5/23/2021 by cmdrkeenkid because: Added additional response.

Thank you for the information. I was not aware there was a difference. I am sure some of the frogs I am seeing are indeed Southern Toads, and not Bufo frogs. I think my dogs may not know the difference either, and why I don't have to deal with the excessive drooling and the doped up behavior, as often as would be expected, if their encounters were always with Bufo frogs.

It is going to be extremely difficult for me to tell them apart, as our battles are most intense at night. I think that is the case because they are smart enough to think they can sneak in a lick when I can't see them.

You have a Husky mix, so I don't have to tell you how clever those little brats can be. Too clever for their own good, and overly defiant. Your typical teen.

I found this to help with identifying as least two of the the fourteen species of frogs they claim are residents of rural South Florida.

I just found out from @cmdrkeenkid that some of the critters around the homestead are not Bufo frogs but Southern Toads.

I can tell you that some of the toads around my house are bigger than the average man's foot, and it is almost like an invasion of the frogs every night, as soon as the sun starts to go down. Don't let it rain. The noise is amazingly loud. Ruins all those beliefs about the peaceful quiet of country living.

But to answer your questions, yes, that is the critter I am talking about.

posted on May, 23 2021 @ 03:29 PM
link
I have two cats, siblings, who like to eat plastic. Despite my best efforts to keep delicious plastic out of reach, they manage to find some now and then. I *think* they've regurgitated it everytime so far (I haven't seen any in their poop), and they haven't had to have emergency surgery.

Just as I was reading your post, my cat Sylvester, the needy one, jumped up and laid down on my keyboard.

He is also the mini Husky, that looks a lot like Mama Bellauh, so he was the first adopted into the Husky pack. Enoch, has the same personality as Papa Maxx, so they take turns playing Alpha, because they are both super lazy.

My cats, please don't tell them that I called them cats, they love plastic also, but only to play with and to tear apart. They don't eat it, but they have been known to pee on it. That is why no plastic bags are allowed to stay in the house.

They will find it no matter where you hide it.

Once you know how to tell them apart it's pretty easy. You already found a great resource! I like this graphic showing the difference as well. 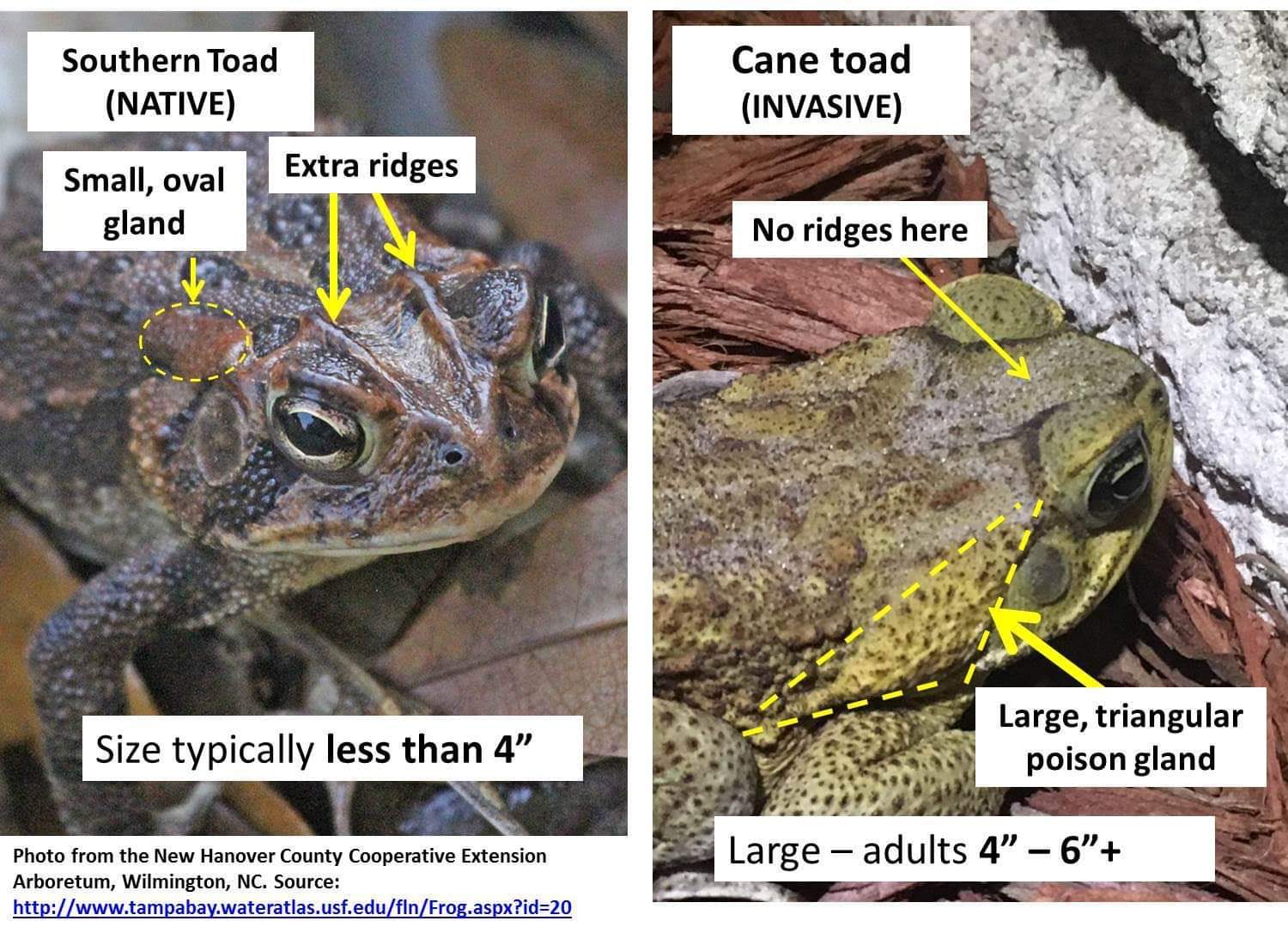 The biggest tip is usually size. Southern toads are typically a lot smaller than the Cane toads. Cane toads are softball sized or larger, sometimes needing two hands to hold. Southern toads you can get two or three even in one hand. Aside from the size, the ridges between the eyes on Southern toads help identify them.

Southern toad in the backyard from 10/02/2021. You can see the ridges between the eyes on this one.

Cane toad in the front yard from 23/05/2021. You can see the lack of ridges and hopefully get some sense of scale. The strip of pavement is twelve inches wide.

Bucket of Southern toads from awhile back, just for fun. These were just from the backyard! All were put back safely. 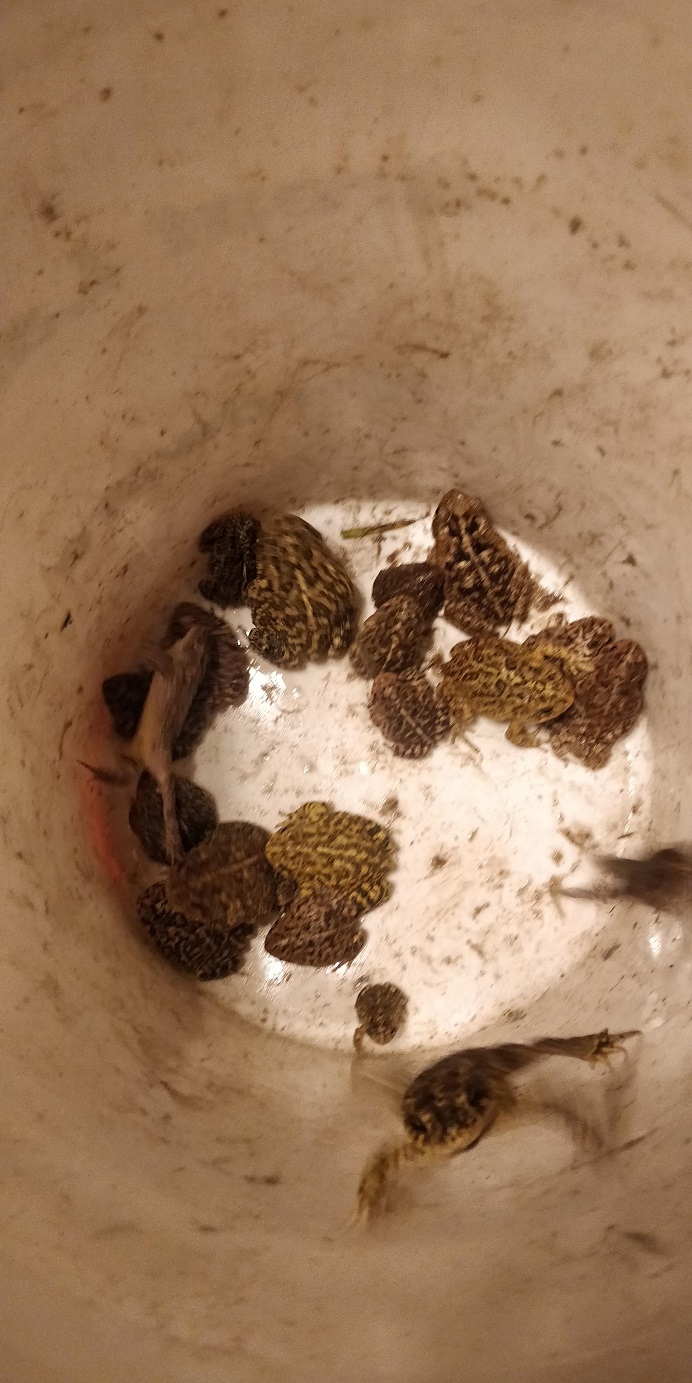 Also, watch out for Hypnotoad.

All hail the Hypnotoad!

Some of those darn things are so big that they would cover your whole foot, forget about your hand. With two hands they would still spill over.

When they jump against my garage door, they sound like they are trying to tear it down. I was hoping that the Southern Toads would win out. No such luck.

I would take pictures of the invasion so you guys could see what I am dealing with, but I have way too much trouble trying to upload a pic to ATS.

Just trust me when I tell you that they are everywhere. I live in the woods and I have a pond, they are so plentiful it sometimes looks like an invasion.

Found this video that sort of shows the craziness I put up every darn night.