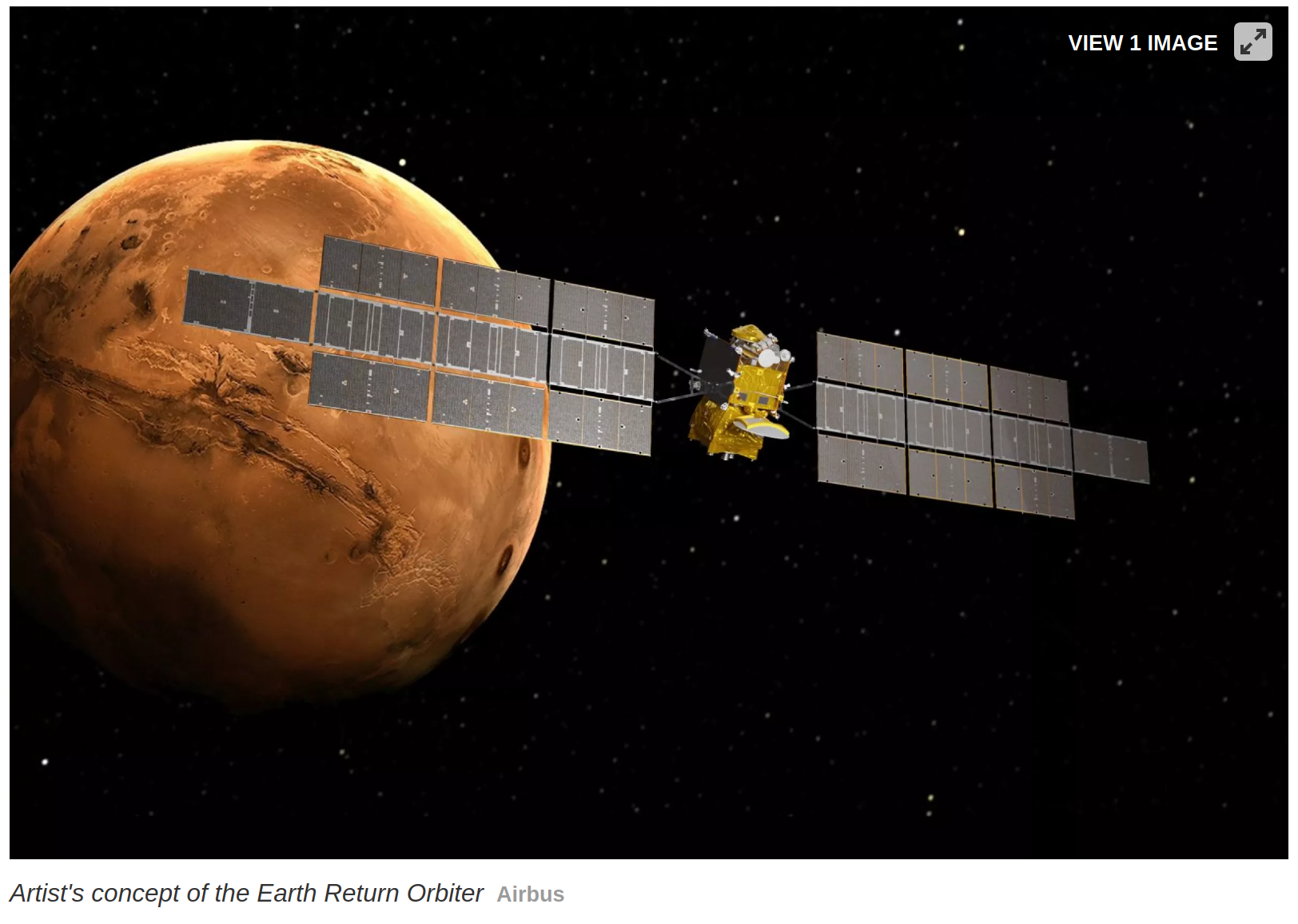 The first part of the Mars Sample Return project is NASA's Perseverance rover, which is scheduled to land on Mars in February 2021. The rover will traverse the Martian landscape looking for areas where life, past or present, could exist and use its drill-equipped robotic arm to collect samples. These samples will be sealed in tubes that will be left on the ground in one or more caches.

For the second phase, the Surface Retrieval Lander will launch in 2026. This lander consists of a surface platform equipped with the robotic Sample Transfer Arm, the Sample Fetch Rover, and the Mars Ascent Vehicle.

After touching down near the sample caches, the Sample Fetch Rover will deploy, drive to the caches, and collect the tubes. It will then return to the lander where the robotic arm will take the tubes and place them in the Orbiting Sample capsule in the Mars Ascent Vehicle. The Mars Ascent Vehicle will then lift off and release the Orbiting Sample capsule in orbit.

Airbus got the €491 ESA contract to manufacture the Earth Return Orbiter.

The orbiter will launch on an Ariane 6 rocket in 2026 and begin a 5 year mission.

The orbiter will use a hybrid RIT-2X ion/chemical engine to get to Mars. It will arrive at Mars orbit in 2027.

The orbiter will grab the orbiting samples and they will be "bio-sealed in a secondary containment system before being secured in the Earth Entry Vehicle."

Glad to see there is a real plan now. A lot still has not been worked out.

Still not so sure we should bring the samples back to Earth. A balloon habitat or module for the ISS should be used to study them in space.

Then, if no one dies, maybe bring them to Earth.

posted on Oct, 17 2020 @ 11:33 AM
link
The first thing I thought of when I read the article was this movie. They used the space station and we were still doomed in the end.


That movie just about gave me nightmare

In 1957, Disney made this video showing the space ships on the drawing board by Wernher Von Braun and Ernst Stuhlinger, which would travel to Mars at 75,000 mph, and deploy a landing craft with return ascent vehicle. The end of the video is a vision further in the future where some small shuttle saucers pick up some passengers in an orbiting space port, and then fly into a giant flying saucer mothership which then heads off to other star systems (the beyond part of the video).

The space ship design looks spread out because it used a nuclear reactor to supply heat to the living compartment, but they didn't want the reactor anywhere near the living quarters so they are separated by a long pipe. There's no way to launch a craft like that from Earth, so it would have to be assembled in space. Von Braun had plans for a space station too, which could handle the assembly.

Back to the OP, it will be a challenge to return samples from Mars so this will be an accomplishment if they can pull it off.

originally posted by: LookingAtMars
Airbus got the €491 ESA contract to manufacture the Earth Return Orbiter.

I would have charged a few million times more than that, so Airbus is really working cheap on this project, hope they don't have to cut too many corners.

originally posted by: Trueman
a reply to: LookingAtMars

Haha, NASA has made some embarassing high profile announcements about forthcoming announcements, only to make a rather anticlimactic announcement, so yeah that sounds like something they would do. But we already know that from Mars rocks like ALH84001 that one NASA scientist thinks shows signs of microbial life fossils, but other scientists disagree. Maybe instead of fossils, if they could capture actual live organisms that would settle the debate.

edit on 20201017 by Arbitrageur because: clarification

I believe NASA is a desinfo agency. Something like those generals on the tv show Project Blue Book, but way more expensive.

Millions of years.
Where there is water...
there is life.

Isn't it likely that the tubes will be covered by soil over the 6 years they are laying on the surface of Mars?

And whatever (potential) life is "sealed" inside the tubes will die during that time?

I don't think NASA is looking to bring active, living life back to Earth from Mars.

posted on Oct, 18 2020 @ 01:42 PM
link
I really respect NASA and the rover programs have been some of the best science ever accomplished.

However, at this juncture, our technology in SEM and Spectral Analyzers, and especially the weight/footprint reduction over the years, means they could be on this mission as the definitive proving mechanism.

Why collect samples when you can analyze them there? They are the same tools that we would use on Earth to definitively classify life.

I could probably answer my own question, knowing that once life is discovered on Mars, the gig is up for a lot of scientists, both at NASA and elsewhere. I would hope this is not the driving factor, but money and careers rule the world....

Maybe we could bring them back?

He just said in a video, that in four years he hopes to send an unmanned ship.


Mars does have weather: clouds, dust devils -- and (more relevantly) occasional fast winds and planet-wide sandstorms. Sand dunes on Mars can move (on average) a couple of feet per Earth year.

Granted, I doubt they will actually get covered because I'm sure NASA will take sand dunes into account, but if they were careless enough to leave a sample container on the downwind/leeward side of a sand dune, then there is a decent chance than dune might move over it in 6 years.


I guess I didn't word that clear. I know Mars has weather, it is not like weather we have on Earth.

Erosion on Mars is a multitude slower than erosion on Earth. Something could sit on the surface of Mars for 600 or maybe 600,000 years and not be covered or damaged by Mars weather.

A very few dunes have been shown to move. Most do not move.