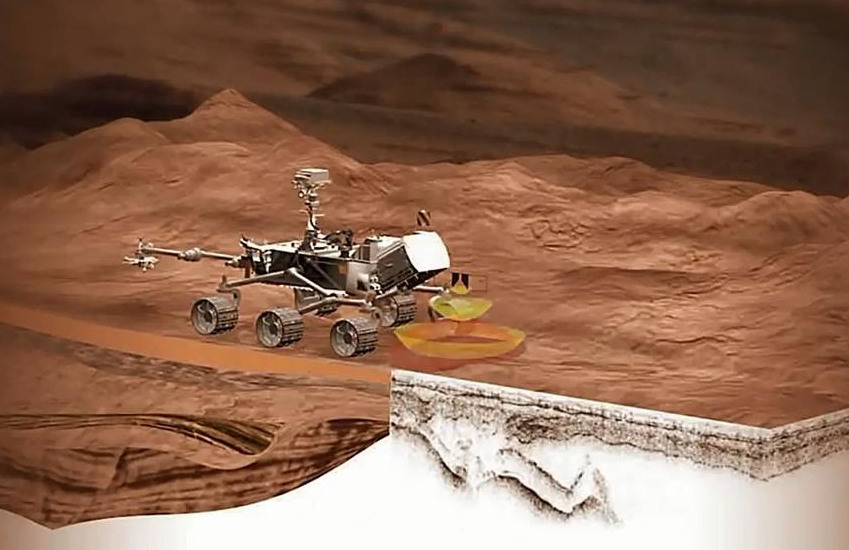 After touching down on the Red Planet Feb. 18, 2021, NASA's Mars 2020 Perseverance rover will scour Jezero Crater to help us understand its geologic history and search for signs of past microbial life. But the six-wheeled robot won't be looking just at the surface of Mars: The rover will peer deep below it with a ground-penetrating radar called RIMFAX.

Unlike similar instruments aboard Mars orbiters, which study the planet from space, RIMFAX will be the first ground-penetrating radar set on the surface of Mars. This will give scientists much higher-resolution data than space-borne radars can provide while focusing on the specific areas that Perseverance will explore. Taking a more focused look at this terrain will help the rover's team understand how features in Jezero Crater formed over time.

Short for Radar Imager for Mars' Subsurface Experiment, RIMFAX can provide a highly detailed view of subsurface structures down to at least 30 feet (10 meters) underground. In doing so, the instrument will reveal hidden layers of geology and help find clues to past environments on Mars, especially those that may have provided the conditions necessary for supporting life.

"We take an image of the subsurface directly beneath the rover," said Svein-Erik Hamran, the instrument's principal investigator, with the University of Oslo in Norway. "We can do a 3D model of the subsurface - of the different layers - and determine the geological structures underneath."

The next NASA Mars rover is getting closer to Mars. If Mars allows, it will land in about 4 months.

It has a lot of cool instruments on it to study Mars. One that I think may produce some interesting data is RIMFAX. 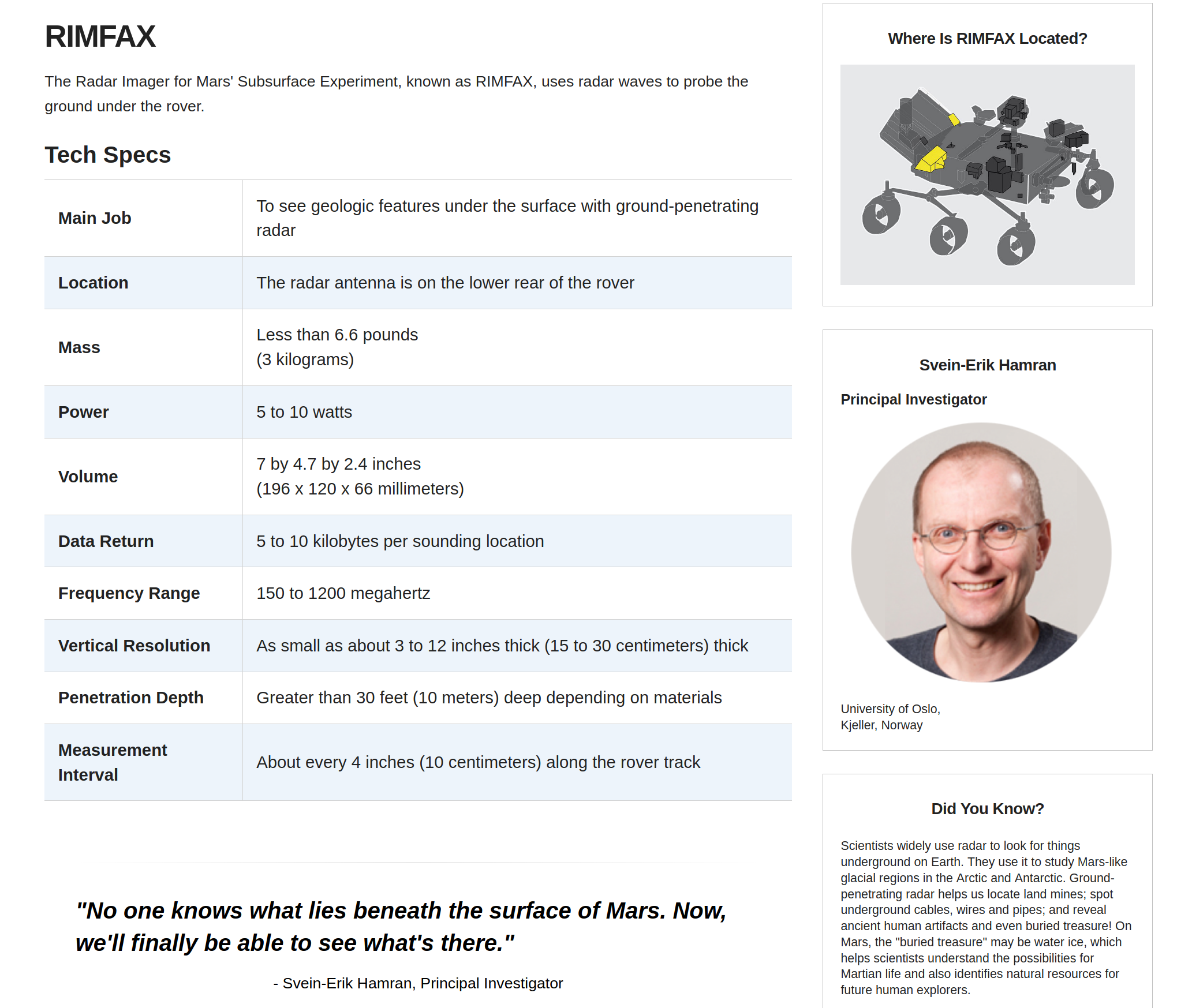 NASA and ESA orbiters have ground penetrating radar. They have discovered ice, lakes and rivers under Mars. RIMFAX is more sensitive with better resolution. 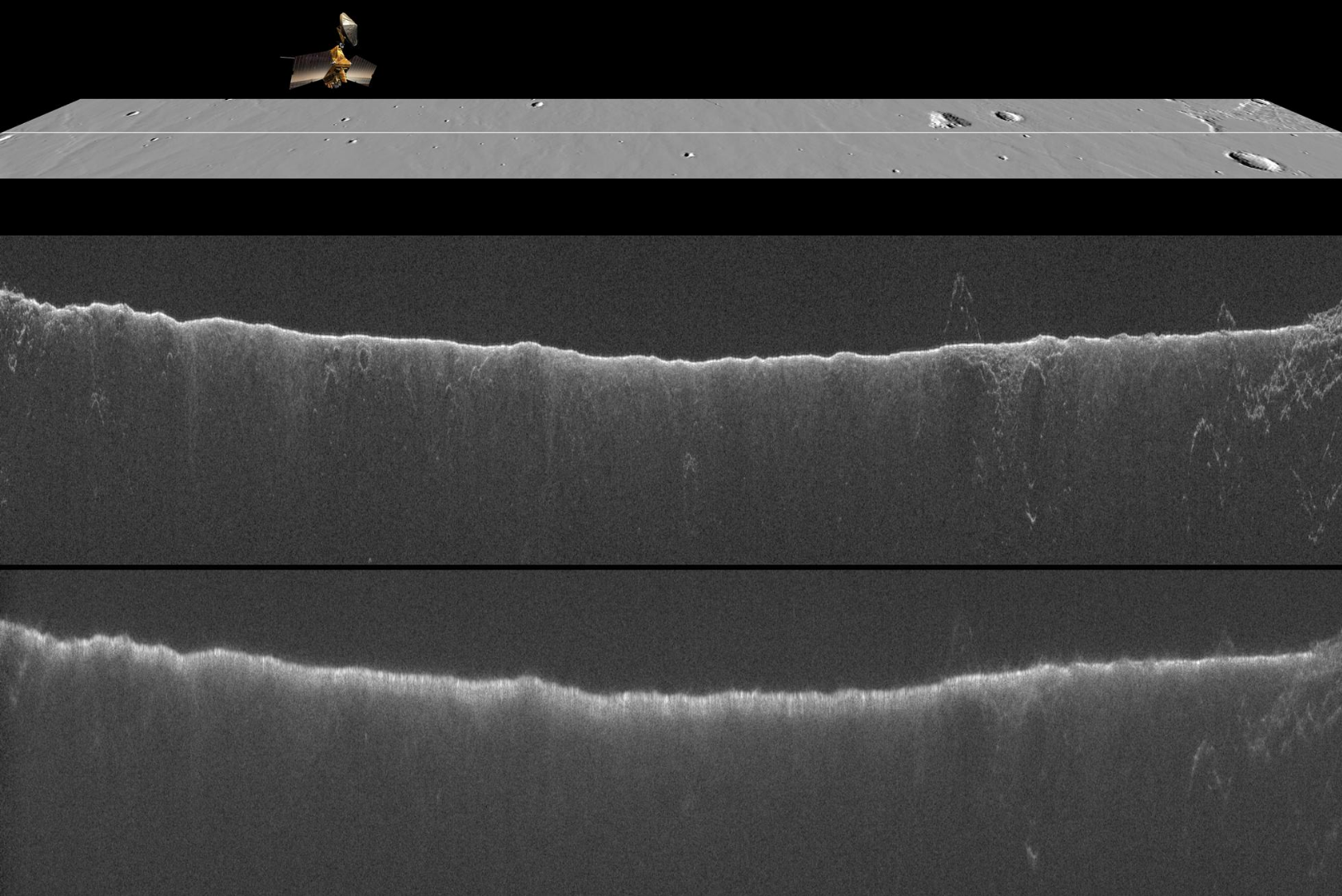 I have always believed that all the good stuff is underground on Mars. Maybe we will get a drip of disclosure of Mars from this radar. 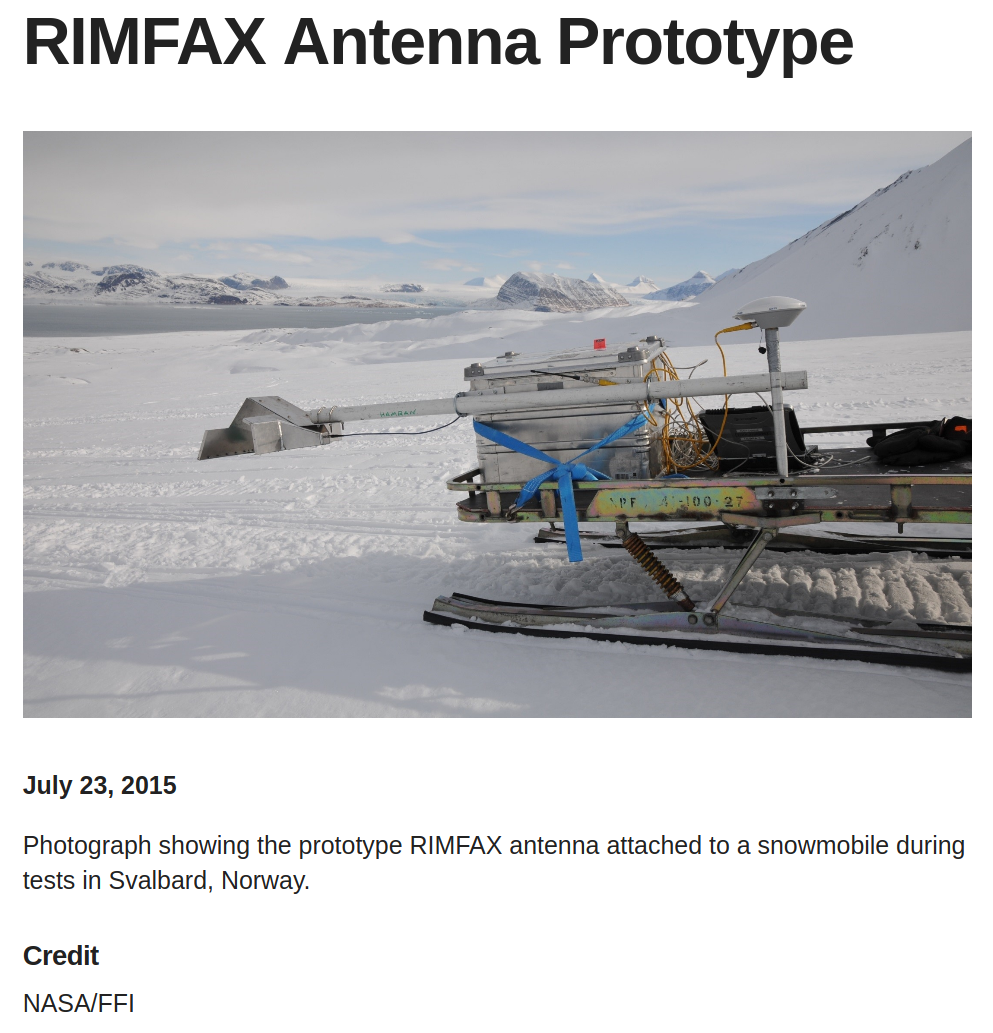 Radar images that show something unusual? Just like the methane, it would be a maybe it is... maybe it isn't kind of thing. No way to really tell in the near future. 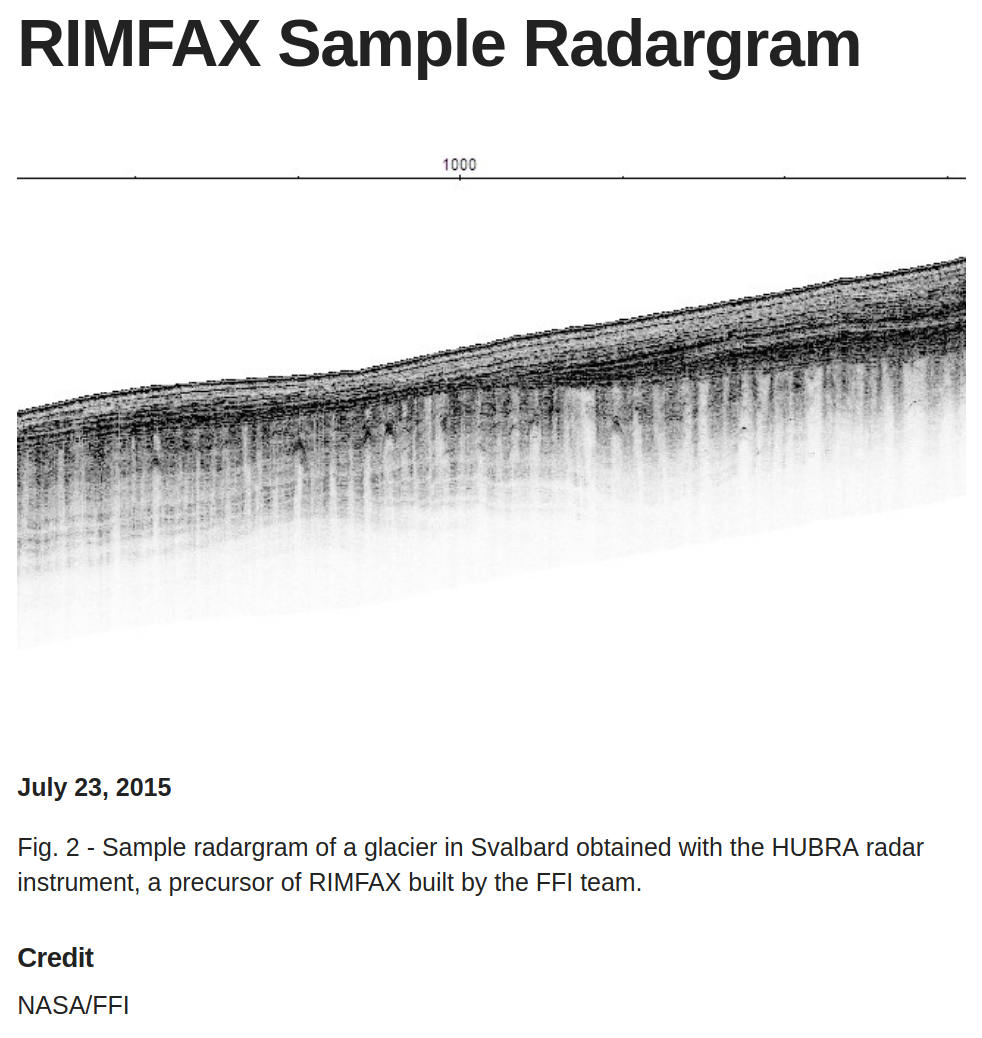 As an archaeology fan I'm pleased to see GPR onboard the rover , cool tech that could return some interesting finds.

Fingers firmly crossed for the landing , that Sky Crane malarkey is scary stuff , I'm especially looking forward to hearing the winds on Mars.

This should be exciting..! Now if Nasa would venture into some Martian caves. I bet that's where the really exciting stuff is!

Well, it's about time.....I've been saying this should be done for what feels like an eternity.

This should be exciting..! Now if Nasa would venture into some Martian caves. I bet that's where the really exciting stuff is!
edit on 10-10-2020 by lostbook because: Paragraph edit

You will have to forgive me, I read the title and instantly though of this.


Still extremely late development, we already have ground penetrating radar and satellites that can peer through the sands of the Sahara, the ocean and ice so why have they not put a few of those into Martian Orbit, or have they?.

Either way good news even if it seems too little, yes surface based ground penetrating Radar is better at close observation than a satellite based system could ever be, higher resolution etc but given the amount of money they have chewed up over the decades they should have done this a very long time ago already.

I am certain there are ruins on mars, I am certain the last released image of the face shows artificiality even if it has been mysteriously destroyed and looks nothing like it did in the 1970's except for it's outer shape, it looks like it was hit by a high to medium yield air burst to me in a deliberate attempt to hide something by a group of scared crook's whom think they will lose power if we gain too much knowledge.

Until they lose there grip on power we the people whom they lord it over will always be kept in the dark, what we are told will often not be the truth and many truths will be hidden from us not for our sake but for there's.

I'd love to take a giant fan to Mars and see what i discover right under layers of dirt.

Hopefully it examines the oceans beneath Mars.

They say it can see at least 30 feet down. This means there is a chance it may be able to see as deep as 100 feet or more.

It seems pretty clear that Jezero Crater had water in it's past. Not sure there are any oceans to see that close to the surface in this location.

Remains of a lake, maybe? How many rovers have had a thick dust covered frozen lake or ocean right under them and just could not see it?

No one really knows what's down there. Could be oceans, ecosystems and more. 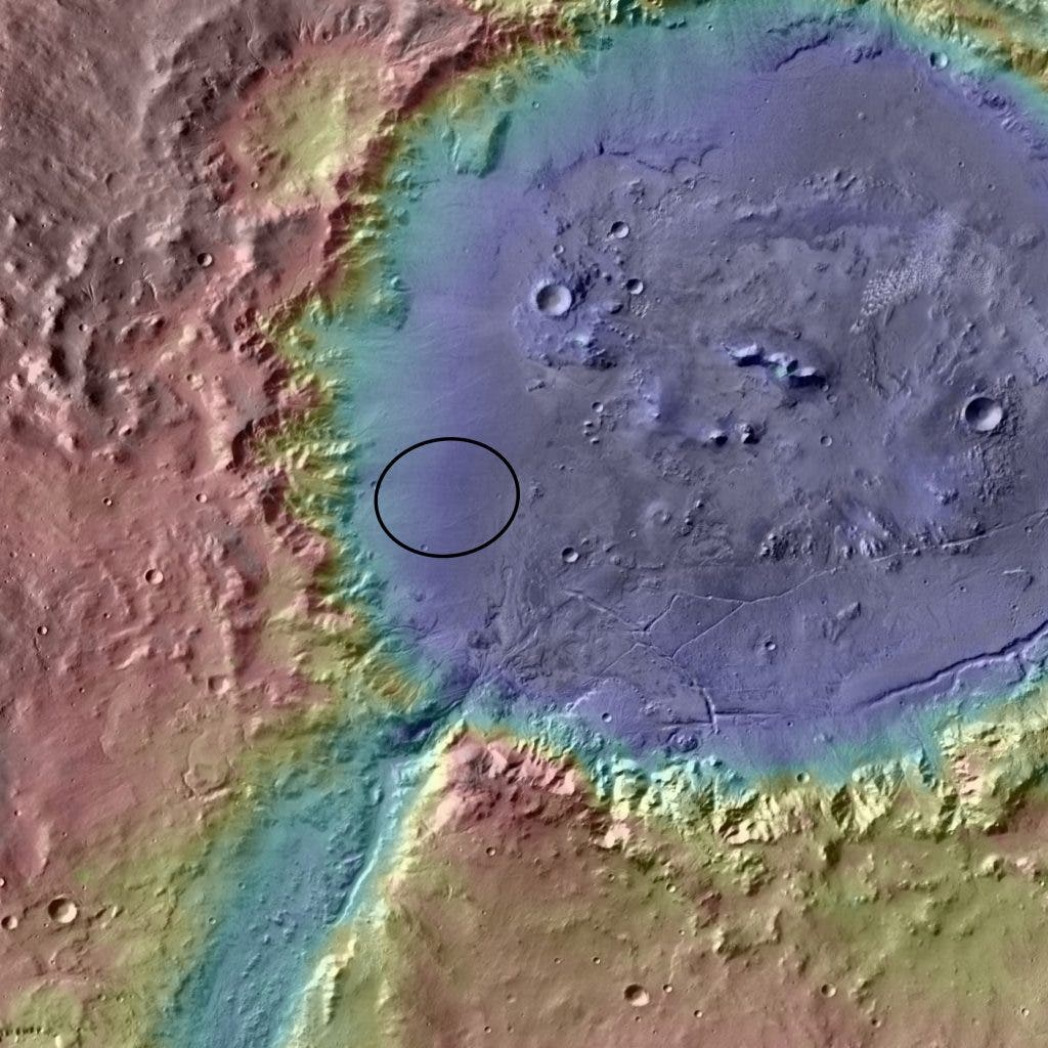