They are crashing our economies

Yeah, I can see the “universal income” trial balloon floated around over the past few years. Kind of “let’s see what happens in ‘normal’ economy” if people are just given money with no need to work. Well, seems that our learning institutions have socialized us to “work” and we don’t know how to ‘wonder’ or ‘question’ or ‘explore’ any more; just show up at the sprocket factory where Mr. Spacely works your finger to the bone for three hours!!

I think an economic weaning off Big Oil and coal (that was dying anyway and they are circling the drain now). The unlimited, clean power, from any source, creates a hydrogen based fuel cell transportation economy with other high tech like the much vaunted graphene being used as a coating on barges and other large ships. The expense of shipping goods falls and so does this global yo-yo economy where you follow an index like teenager on Facebook! [ends]

To get there, you need to destroy the old social programming and let people find their own path: Covid lockdown!

It makes sense. First, shock the system by stopping normal activity. Next, allow people to figure out how to live in the ‘new normal’. As we, being weird, naked monkeys, start to socialize more, the ideas get passed around... new social behavior that is broken away from the old ways to the new! Instead of killing a president and replaying the ‘murder of the king’ you use more “emotional control” and the “wanting to be part of the heard” as a tool.

edit on 6-10-2020 by TEOTWAWKIAIFF because: clarity is an energy


Wow you got all that from "they"


originally posted by: chr0naut
a reply to: 19Bones79

Can you be a bit more clear as to who you mean?

Pedantic twat. You know exactly who they're talking about.

I've been away for a few days and I come back and read your bs and it's as predictable as it was few days ago.

Not necessarily. Some people are just so spooked by the stark and disturbing reality that they are actually unable to see the reality staring them in the face. You know the old saying, "Better the devil you know than the angel you don't." That's them.

History is replete with this type. They've made all kinds of evil successful because they couldn't look evil in the eye and deal with its stark ugliness.

Well it's going to punch all of us really hard in the face the next couple of years.

Yo-kay. When the Federal Reserve is still printing currency come November you can come back and say how stupid that website was. I doubt you'll own up to it but this is your chance.


Why are Coins no longer being Minted ? TPTB are Ushering in the " Cashless Society " as I Write this Oh Ignorant One........

Yo-kay. When the Federal Reserve is still printing currency come November you can come back and say how stupid that website was. I doubt you'll own up to it but this is your chance.


Why are Coins no longer being Minted ? TPTB are Ushering in the " Cashless Society " as I Write this Oh Ignorant One........

because the Mint stamps the coins, not the FED. The FED doesn't want the Mint around anymore so they are pushing them out. Hence a coin shortage.

Heh, yup ... just that I was far more lazy in my posting than you... and yet we both might get paid the same stipend in this maybe futureworld ... hmmm.

It is interesting to hope for a real sea change that doesn't suck. We obviously have some big issues coming to the fore and this may be an organized humanitarian response, despite the paranoia being promoted against shadowy eggheads manipulating the masses. They can't ALL be child consumers.

Personally, moving away from 'slavery lite' seems a better modality as long as we have the means to produce at an even better rate sans uneducated labor. Why not?

I think the world would be quite lovely if people could spend much more time raising their families and traveling, for instance. Imagine what doors free university, accessible anywhere, would open?

I DO feel bad for the people who use work as an escape from their families or as a way of avoiding deep thought, but am sure they will muddle through and find alternatives ... like Soma.

But with our luck the baby chowing Illuminatti are real and we'll be lining up in the camps for some real time off ... oh well, at least we'll have something interesting to talk about and Yelp can rate the showers.

Why don't YOU call them and ask, you're the one who injected this into the thread as if it was exactly like the article said it is, I only commented on the weakness of the whole story.

A very detailed reply which, tell me if you agree, could be summarized by saying we should accept a CCP type global overlord one world government.

You cannot put the blame on Joe Average though.

The same people responsible for the past are now manipulating events to own the future.

That future sees us all as a commodity.

It aims to rip our human spirit right out from inside of us.

You seem to be volunteering your wrists for these handcuffs for the sake of a "better" future.

They do not have your best interests at heart.

Honestly happy for you that it's going well.

Here's to hoping that you have evaded the fisherman's net for good.

It's the way I see some companies being run at the moment.

Top management are pushing people to make sales for instance, but then four of their lines have been halted. These people are making sales but then they cant deliver.

A lot of companies have had overpriced coaches the past year come in for training telling people they will be replaced by machines.

It seems that a lot of things happening right now are nonsensical, unless that is exactly the intention.

That was one hell of a reply. I couldn't agree more.

To everyone that posted links I will check them all out, so thank you.

The day for drama will come sooner than you think.


Covid is just an excuse, and not even a good one since it' s just a flu.

originally posted by: CriticalStinker
It will always be someone else's fault or fake news.

This is the strongest economy per Trump's tweet today. He says stock market are at record levels, unemployment at record lows, and so many other things!!!!

"I give out the most free money. The best. More than anyone in our history."

originally posted by: Zanti Misfit
Why are Coins no longer being Minted ? TPTB are Ushering in the " Cashless Society " as I Write this Oh Ignorant One........

Why do U.S. coins seem to be in short supply?
Business and bank closures associated with the COVID-19 pandemic have significantly disrupted the supply chain and normal circulation patterns for U.S. coins. While there is an adequate overall amount of coins in the economy, the slowed pace of circulation has reduced available inventories in some areas of the country.

The Federal Reserve is working with the U.S. Mint and others in the industry on solutions. As a first step, a temporary cap was imposed on the orders depository institutions place for coins with the Federal Reserve to ensure that the current supply is fairly distributed. In addition, a U.S. Coin Task Force was formed to identify, implement, and promote actions to address disruptions to coin circulation.

Since mid-June, the U.S. Mint has been operating at full production capacity, minting almost 1.6 billion coins in June and is on track to mint 1.65 billion coins per month for the remainder of the year.

As the economy recovers and businesses reopen, more coins will flow back into retail and banking channels and eventually into the Federal Reserve, which should allow for the rebuilding of coin inventories. The cashless society Rothschilds sent me with this link.


Overwhelming correlation between the severity of a lockdown and the economic cost. 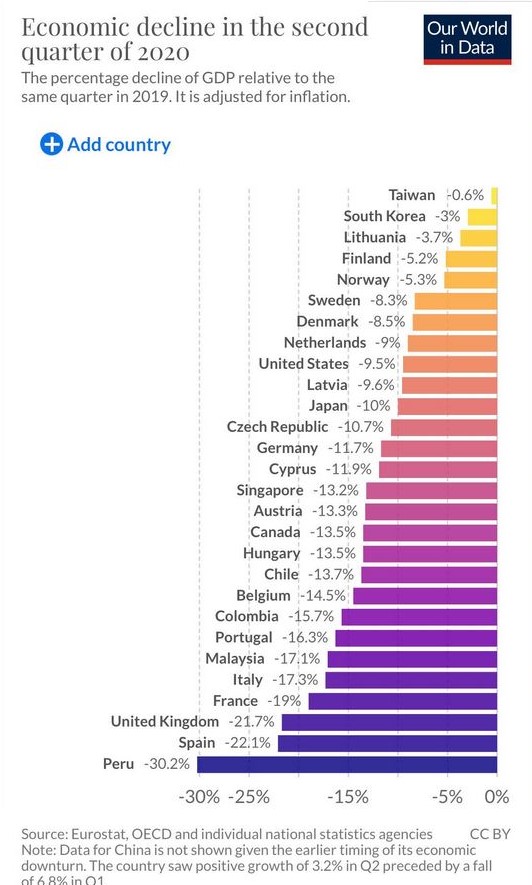 posted on Oct, 7 2020 @ 12:38 PM
link
a reply to: SleeperHasAwakened
Well explained and I totally agree with you...I'm just not an economist so couldn't put it as eloquently as you did

a reply to: elysiumfire. "So what happened, between now, and when you posted this : ATS : David Icke Brings A Little Clarity - But you already know it?"

I posted the video because of parts of what he has always stated regarding globalism which resonated with my own thinking. Globalists causing chaos to bring about their own particular vision of how societies and the world in general ought to be. A lot of what Icke has also stated I cannot reconcile with, and I don't attempt to do so. In the video, I think he explains the intent of the globalists quite succinctly, but it doesn't take an Icke for us to see it.

This 'great reset' is not for the benefit of humanity.

Actually, it is. Just not for all humanity. It is for the benefit of a small section of it in each country, the rest will be culled, and the reasons why I have already outlined in my earlier post. In simple, logical utility, we have to reduce our population numbers, because our planet does not have the extractable resources for us to continue to live in the way we do. One way or another, either nature herself, or we ourselves will force us to 'reset' our mindsets towards the level of lifestyle we enjoy. We have to return to a more commonsense agrarian mode of living, highly managed, and highly controlled, that is if you want our species to survive. We are at the point, or fast approaching it, where our species has to pay the piper. The reset isn't just in financial terms, that is just one aspect, it is more about our societies, the size of them, their diversity, and how the people will be allowed to live.

No. We must include all of ourselves as part of the problem. We want the same as 'they' have, a quality of life that probably exceeds our grasp. We all have a carbon footprint, just as much as they do. We share in the spoils of our technological victories, and as long as all the pollution and toxins we create for our lifestyles are not seen, we go along with the whole charade. No. We are to blame just as much as they are, after all, it is we who buy their products, which took a lot of resources to create, and on our resource finite planet, it is obvious we are going to hit a point where the resources will no longer meet our needs...that is, without taking extreme and very radical action. The globalists believe we are close to that point, and intend on saving themselves and those who can prop them up with their knowledge and skill sets.

I was born in 1960. At that time there were approximately 3 billion people alive on the planet. Today, just 60 years later, our human population has grown to 7.8 billion, all clamouring for a higher level of life style and quality of life, which our planet cannot provide for. Globalists have taken it upon themselves to do something about it, through nicely titled programs with noble intentions.

Sustainable and harmonious ways of living with the planet. What they don't tell you is that it can only be achieved by reducing population in vast numbers. Reducing down to 500 million globally might be an arbitrary number, but it is being used as a working idea, give or take a few million.
edit on 7/10/20 by elysiumfire because: (no reason given)