The Boognish Brown Out 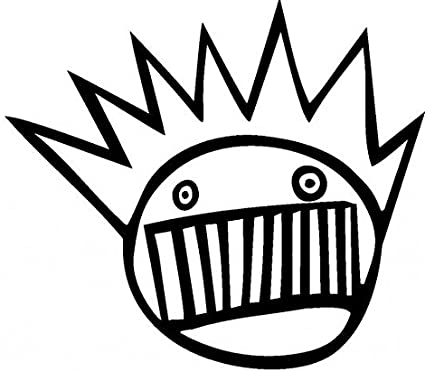 Boognish, the fella above has guided the band Ween (Gene and Dean Ween) since their inception in 1984.

boognish sphereThe Boognish is a Demon God who has appeared thrice to the prophet brothers Dean and Gene Ween. It resides somewhere outside the orbital buffer. Tradition has it that this entity holds a sceptor in each hand: that of wealth and that of power.

Going from insane punk/minimalist to hippy groove to albums with some of the most celebrated Nashville country artists, they change every album and often they completely change song by song in an album.

Some don't like it for that fact, there's almost no consistency, but I look at it as an appreciation of music and they do it right.

Try them and know what you are hearing is going to be very, very different from the next song and the next etc. You can get the vibe quickly in each song.

This is in no way a good representation of their music admittedly. There are so many songs others would have chosen if they are Ween fans.

They literally have dozens of other songs that sound insanely different than these ones.

From 12 Country Greats: Played with star lineup. Song is called piss up a rope.

Ween turned to Nashville studio musicians for the November 1995 recording of 12 Golden Country Greats (1996) which contained only ten tracks. There are two theories regarding the title of the album.[citation needed] The first claim is that it refers to the dozen veteran musicians, known as The # Creek Boys, who played on the album. The second claim refers to the fact that the band did indeed record twelve songs during the demo sessions for the album. When it came time to record the actual album, the band chose not to use the songs "I Got No Darkside" and "So Long, Jerry" but kept the album title. "So Long, Jerry", a tribute to the then recently deceased Jerry Garcia, was featured as a B-Side on the "Piss Up a Rope" single. Sticking to Nashville tradition, Freeman and Melchiondo provided only vocals, allowing The # Creek Boys to play all the instruments. Elvis Presley's former backing vocal quartet The Jordanaires appeared on the tracks "I'm Holding You" and "Powder Blue".[22]

Rock with a cool vid

Imagine this. You write a song that gets picked up for the "Sponge Bob Squarepants" movie (Ocean Man). Its your only hit.

You decide to go to a local public access tv station and at 3 am play this song from that album instead of that one. Note the band is in "White Face" while the drummer, Clive is in a Gorillas suit lol. WARNING! Sound is absurdly LOUD turn it down.

more from the ocean man album but not that one

They are a great live band to see and are very strange all around.

Awesome Plotus thanks for the response. They do have sense of humor. I debated with some people if I should post this one. Answer is obvious:

I like a lot of their songs though, so maybe I just didn't pay attention to that.

AT1 you gave me another chance through music! Thanks for the response. Last night was tough and I know you wanted to kill me at one point. I was on my random hard roll. Maybe the world is getting to me more than I want to admit.

You've given me room in the past so just wanted to acknowledge that.

In response to the question, I think their highest "hit" was this one. MTV played them live at a beach party with this one and no one liked it at all and it caused a huge backlash against WEEN and it made me like it more. Its painful yet great.

Just for good measure one that got 0 attention and is a sweet funk rock with 2 teens in their basement.

Politics divide people. I do a pretty good job of respecting and getting along with people and separating the person from the politics.

There are plenty of members here that I butt heads with when it comes to politics. Even people whom I share similar political ideologies with. The devil is in the details.

I may not like a person's political affinity, but when it comes to that person's other areas of knowledge I respect it, and appreciate it. Hell, I can even appreciate another's political difference because it's a different viewpoint. It doesn't mean I don't like the person.

There are people here who are expert's in certain fields. I seek answers, and sometimes I get great help from people who just minutes prior we were going at it.

As far as I'm concerned what happens in the political forums, the mudpit especially, stays there.

Anyways. Yeah, I like Ween, because they're not afraid to stand out and have fun. They don't care too much about what people think, and they make the music they want to make. I like that they don't take themselves too seriously.

Check your messages
edit on 1362020 by AutomateThis1 because: (no reason given)

I appreciate and respect that. And no to Aquabats knowledge but am laughing in 10 seconds into "super rad" right now. Weird ska I like it.
edit on 13-6-2020 by ColoradoJens because: (no reason given)