No, it's not an strain of marijuana, and it's not the preferred herb of the police, it's an invasive plant that is driving me nuts in my garden.

I've posted in a few other threads about this year's garden, which some of you may or may not know. Well, the garden is coming along pretty well, although I have to replant the second planting of lima beans, and replant the first planting of collards and turnip greens.

I've noticed pig weed (I think) coming up, and it's driving me nuts. Here's why:

This area of yard has been fallow for a few years now, and is basically a "lawn." During those few years, zero pig weed came up, mostly just grass, and it was cut every couple of weeks. Here's where it gets weird: I tilled up the entire garden, and the pig weed is only coming up—invasively so—where I have formed mounds or hills and actually planted crop. The sections of garden that are tilled but not planted, zero pig weed, and I do not understand why. I was thinking birds, but there's so much.

Where did it come from this year? I first noticed the pigweed about a decade ago when I brought home a load of stable manure/mulch, so I imagine the seeds were in there. But it ONLY comes up when I plant a garden, and ONLY where I have actually planted seeds, which is equally interesting: if it's an annual, how the hell is it suddenly so prolific and spreading so quickly even with just seedlings?

I even put Preen out after the crop sprouted, and it still came up, almost more prolifically than the actual crop.

Does anyone know why it only comes up in these particular places (areas planted and not in simply areas tilled) and how to control that # except weeding by hand? I'm also reading it's resistant to quite a few herbicides ( which I wouldn't use in the garden anyway).

Have you read the parable where an enemy is identified to have sown weeds into a crop ? And the master says , leave them in or pulling them up will damage the crop before harvest.
Is an enemy bringing in pigweed perhaps ?
Or maybe it's worth getting a pig ?
Other than that , mulch , even a small amount is better than none.

Your tilling may have brought seeds up to the perfect layer for germination. Also if you are watering your seedlings you watering the weeds so they will appear to be growing more around plants you planted.
edit on 2-6-2020 by Identified because: (no reason given)

But where did the seeds come from? It's like someone came in the night and spread/planted them everywhere.

And that doesn't explain why they only came up where I have already planted, and not where the ground has simply been tilled.

Didi you do a transplant where you added soil?
If not, I'd say they were either present then activated with the watering, or they floated in as seeds and germinated in the wet spots.

The only thing added was the manure/mulch like 10 years ago, when I first noticed it coming up.

I only plant that plot like every few years, and they only come up when I plant. There is no other pig weed anywhere around here that I've seen, that's why it's so mysterious. And if they were already present, I mean, there's been plenty of rain over the course of these few years.

If you are watering the area where you put seeds or seedlings more often than the another area then that is what is making them germinate in that area more than the other area.

That's kind of an interesting plant. Packed with vitamins and used in different foods.
Ruthless weed though, with over 100k seeds per plant and will germinate at nearly 12" deep. Jesus.
It's tough telling what depth they are at.
They could have very well been in the manure.
They are an annual summer plant, so they will root pretty deep.
Not sure what food safe herbicide to use.
Looks like the only option is hand removal.
Maybe bag the seeded plants and get one of those weed pullers that twist?
Info off an ag site...

"If you spot pigweed plants that have yet to produce mature seeds, pull them or cut them off just below the soil line. Plants with mature seeds should be bagged before being removed and destroyed. Either burn the plants or bury them under at least a foot of compost."

That's one of my thoughts, even though they would have been dormant in the ground for several years, which has me curious.

I believe that's how they originally go there, 10 years ago. Interesting they lay dormant for years only coming up when I till and plant.

Yeah, in years past I have pulled up rogue 4-5 foot plants with a 12" taproot, just never seem them as prolific as this year.

Yeah, it's a problem when you till that it brings up dormant seeds. I try to till in the fall and then I cover the area in a tarp and hope the heat tin the spring kills any seeds that I've brought up. It isn't always successful because sometimes you can't wait to plant until after if has gotten warm enough to kill them. All you can do is weed, weed, and weed and put down a weed block if able.

I spent a couple hours on Monday weeding my vegetable plots. I find it to be quite relaxing until it becomes too hot and then I hate it.

Greater plantain is like spinach and can be cooked like spinach. It tastes pretty good when boiled with a little bit of salt and butter added. Raw, it can cause your blood to gel if you eat too much of it, they used to call it soldiers bandage, they would wrap it around the wounds and it would clot the wound quickly and has some antibacterial properties. Not quite as good as Yarrow for helping a wound but is still really good, yarrow is not as common but contains some hydrogen peroxide chemistry in it. Yarrow can be taken supposedly for ulcers, but I have not studied that and do not know how to use it internally. I would rather use it topically for cuts because it helps speed healing too. Here is a little info on Yarrow, I think this is one of the most important weeds in my yard, others are the thistles and dandelions which are also great weeds if you do not spray them with poisons.

I have never ate pigweed. I have heard they are good tasting if you know how to prepare them, but I don't have pigweed in my yard. Lots of yarrow and plantain though, and another good medicine I have lots of is clover. I actually planted extra white clover and a mix of three clovers to enrich what was originally here. Lots of oyster mushrooms and chicken of the woods here too on my land and also the birch tree mushrooms on the dead birch trees for making a drink.

You Ricky are a cornucopia of herbal knowledge.

I've encouraged the yarrow here because of it's pest repellent properties. I'm too am curious about which pig weed this is referring to.

Pretty sure it's pigweed of some type. Had thorny pigweed in the past, this might still be it. 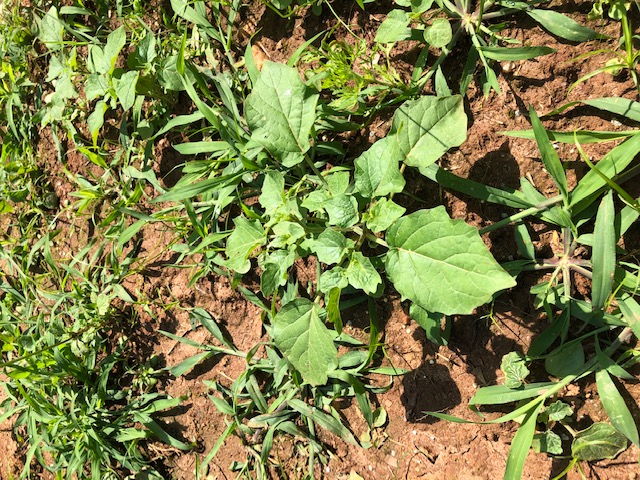 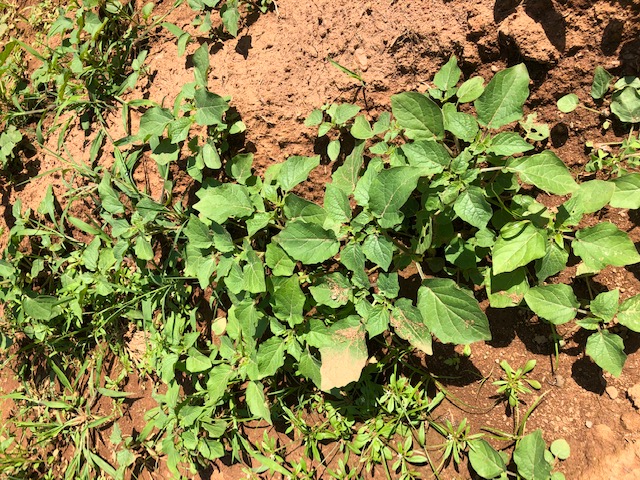 That does look like pigsweed to me. There are a few kinds of pigweed.

This is the plantain. It actually tastes pretty good, just do not put too much in your salad. Raw it is good in the spring but not too much. I like the dandelion greens added to my salad when the leaves are small too, but just a little, they are potent nutrition too. Too much and the salad gets bitter like highly pesticided iceberg lettuce. Organic iceberg lettuce is not nearly as bitter as the kind with commercial pesticides on it.

I was taught about the greater plantain as food when I was a cub scout and have been eating it occasionally for the last fifty years, mostly like cooked spinach and free and organic if you do not poison your yard. It grows almost everywhere around here. But you need butter and some salt because it has some natural alkaloid chemistry so can be bitter when it gets bigger. I used to put some cream in with it too, but I don't add milk to most things anymore. I am allergic to the protein in milk, but have not totally given it up, milk is a powerful medicine for many things, I will never give it up. I guess if I want to fly, I should not drink milk or eat icecream before trying to border because it instantly raises my temperature up to above 99.5 F. Kind of handy if I want to fight covid quickly I suppose.

Of course you can....just get pigs to eat it, they like pigweed.

posted on Jun, 3 2020 @ 04:30 PM
link
Youre probably just tilling up sleeping seeds. Looks like youre going to have to tarp up row mounds for your next planting... unless you want to weed CONSTANTLY.

OSU researchers discover the unicorn - seaweed that tastes like bacon!

I've put down landscape cloth in the past, which was equally a pain in the ass.

Weeds I can handle, just the damned pigweed.

I might plant another plot next year if this keeps happening.