The exact size of the icy rock isn't known, but it’s likely to be only a few miles across with a much larger atmosphere.

Only a few miles across, but with an "atmosphere" 5x the size of Jupiter??? Sounds bizarre...

Yup I was like 3-4 years old during Halley comet, remember that one too.

For real. Now all we need is a cool late night radio host and a cult with a website to make it like old times again.
edit on 2-4-2020 by BoscoMoney because: (no reason given)

Comet Atlas is racing toward the inner solar system, and it could become the brightest comet seen in the night sky in over two decades. The comet, discovered by an observatory designed to protect Earth from asteroids, may even be visible during the day just two months from now. Also known as C/2019 Y4, this comet was discovered by astronomers at the Asteroid Terrestrial-impact Last Alert System (ATLAS) in Hawaii in December 2019. At the time, the comet was exceedingly dim — but the comet became 4,000 times brighter in just a month. This increase is far greater than astronomers predicted, and could potentially signal the comet may soon be exceptionally bright.


Comet Atlas could be the brightest comet in decades

Ok I am excited.


Ok I am excited.

Rain, on my parade, I remember them. One got gobbled up by the sun, think they both did, grumpy 😡. It’s exciting thou, like you said let’s hope.

It's getting sort of near the Sun from our point of view. So unless it really blooms, maybe after it rounds the Sun in May?

posted on Apr, 2 2020 @ 10:03 PM
link
a reply to: rickymouse
This has been discussed already here: www.abovetopsecret.com...
Maybe a mod could merge the posts.

Aye, let’s see what happens I see you point might get gobbled up. Cool May it is. 🤞

It's not going to get all that close to the Sun physically.

What I meant is that, for viewing purposes the closer to the sun it gets from our point of view, the less it's in the sky at night. It's at night that it would be most visible.

As they get closer to the sun, their "dust cloud" can really spread out quite a bit. Particles few and far between, but still traveling together as one. The sun will "light them up", and so it appears huge even though its mostly empty space. As it heads back away, it coalesces back closer together - I guess effectively its own gravity pulls it back together as it heads away from other stroger gravitational forces.

I miss Art. He would have been in his stride with this one.

originally posted by: rickymouse
We have a big comet coming in a few months. It will take our minds off the economy for a while. I do not know how close it will come, apparently it is not going to be a threat. It may give us a decent show though.

The first 2 - the comet's orbit turns before it gets to Earth's orbit.

The third - the comet's orbit crosses Earth's orbit (coming MUCH closer to Earth).

Watch the video - what am I missing?

Why the 2 different orbital paths?

This is true for most comets as they approach the inner solar system. The comet itself (at least the chunk of solid stuff called the nucleus) may only be a few miles wide, but as it gets closer to the sun and warms up, it begins to outgas.

The outgas and dust surround the comet (known as the comet's "coma" or atmosphere) and can grow very large -- it's not at all uncommon for the comas to be as large as Jupiter, or even a good fraction of the Sun's diameter.

That same comet with the huge coma in the cold depths of the outer solar system would have little to no outgassing, and would have no coma to speak of. So a cold comet would be said to only be as big as the few miles of its nucleus, rather than the millions of miles of its coma.

The comet's orbit is inclined to the ecliptic plane (i.e., the imaginary "disk plane" on which the planets mostly orbit) by more the 45 degrees. That is, it is approaching the ecliptic plane from "above" it, will pass below it, and stay below the ecliptic for a long time before it crosses again, somewhere out in the outer solar system.

On the comet's inbound journey, it will cross the ecliptic somewhere inside the orbit of Mercury. 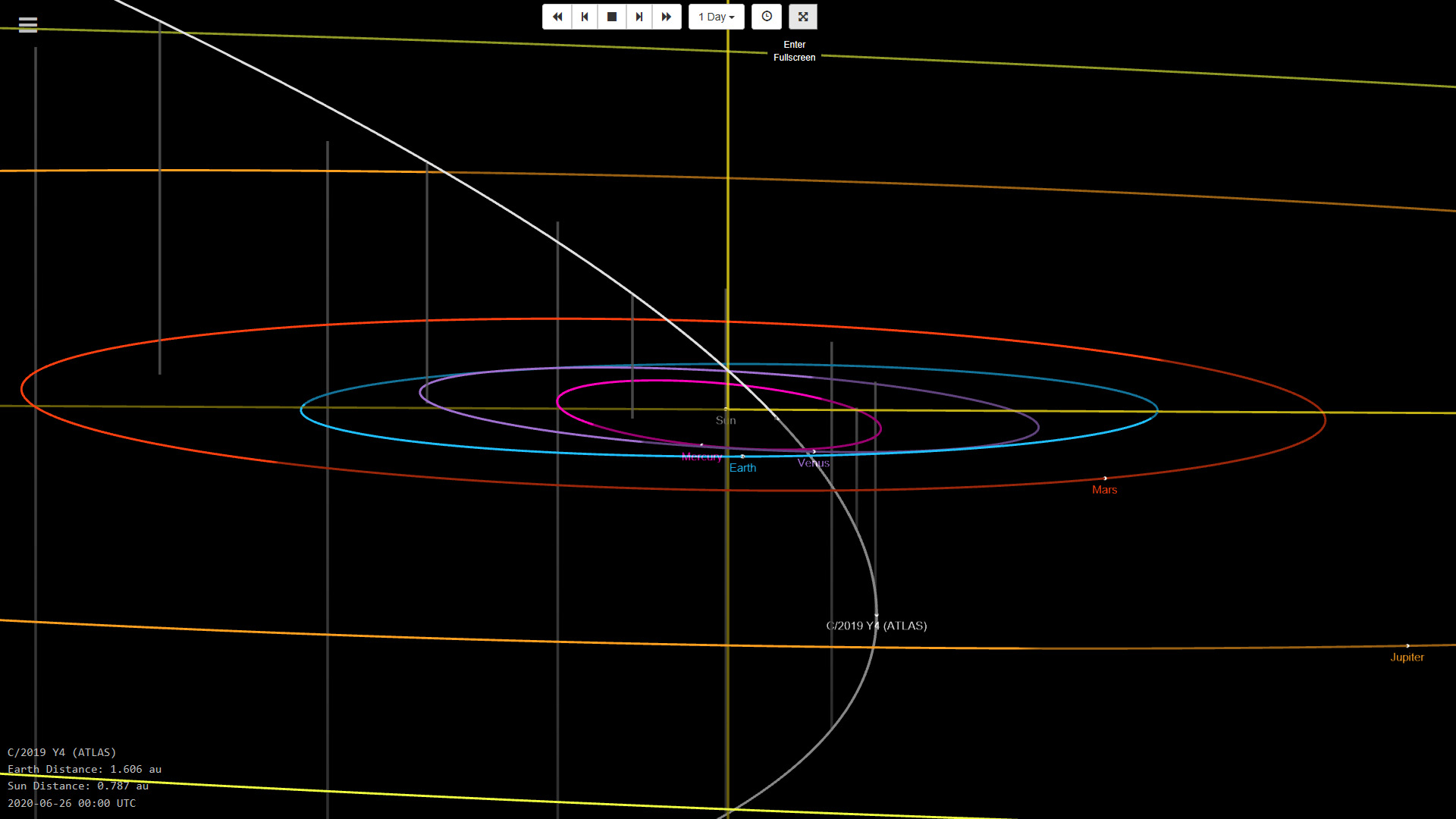 So in that video, it was difficult to make out what plane the comet was on when it looked as if it was close to Earth. In the third video where it looked to almost strike earth, it was actually quite a ways below it. It only looks like it crosses Earth's orbit when you are viewing its path from above.

Here is the comet on JPL's interactive small body database. You can adjust the angle you are viewing the comet to get a better idea of its inclined path as you also fast-forward (or backward) to whatever day you want.