So somewhere there is a contradiction. Either he isn't aware that wine is alcohol, he does understand it, but never really had any, or he lied.


Or perhaps he was just flapping his jaw with his brain in neutral , he does it often.

posted on Aug, 24 2019 @ 02:44 PM
link
Everybody lies from time to time. Politicians definitely lie or they would never get elected. This seems like a little white lie to me.

originally posted by: MRinder
Everybody lies from time to time. Politicians definitely lie or they would never get elected. This seems like a little white lie to me.

How about these....seems like a pathetic insecure narcissist to me.

posted on Aug, 24 2019 @ 03:01 PM
link
Yes, Trump lies more than any president in modern history. Most of the lies are harmless in the sense that they don't have any bearing on the job. It has made it so that hardly anyone takes what he says at face value. A lot of people simply do not pay him any attention anymore except for the policy he makes. Then there are some who believe every word he says then when things are called out they have a conniption fit when they sprain themselves with all the mental gymnastics trying to rationalize it.

Is anyone really surprised or upset about all the lies anymore? I don't think so. I just don't get why some people defend it though. I have said it before that there are two forms of TDS. Trump Derangement Syndrome and there are the Trump D### Suckers.

Even with him being a habitual liar he still has a good chance at being reelected which may say more about the US than him.

Just your opinion. What does it matter

I love fine silks even though I don't own or wear any. They're a respected textile the world over and I can see them and appreciate their beauty and what they represent.

He would order light beer. It was usually Miller Lite or Bud Light. John ordered vodka-based drinks. If they could get some large-breasted beautiful young European girl's attention, they would get a nice bottle of wine, sometimes champagne, and move to a table. He drank his beer out of the bottle. He would nurse his beer. Even if they were there for hours, he would have three beers at the most.

I don't know. According to Trump, every person in the world he talks about is "wodnerful, a great guy" even when they patently are not. So saying he loves French wine could fall in that same vein. What's he going to tell Macron ... "Dude, I know French wine is one of your biggest exports, known the world over, but I friggin' hate it like all other alcohol."?

Yeah, like he's going to walk out and tell reporters the Lil' Kim is a retarded reject from Hell during negotiations.

In other words, the beer had the lowest alcohol content possible. It was not in a glass so no one could see how much he'd actually had (beer bottles being generally dark in a dark bar), and he didn't pound 'em. For all that bartender knows, those bottles weren't empty when they came off the table.

Did he never, ever drink any of it? Not saying that, but it sure doesn't sound like he was working hard at drinking.
edit on 24-8-2019 by ketsuko because: (no reason given)

I was, I was. I was all firkin giddy.
I have always marveled at this censorship stuff. Many of us use these words on a daily basis yet those old codes of conduct are still enforced by the mass media.

I love now how the talk shows, especially the comedy talk shows just use the words we all know they are saying even though they are bleeped. It's just silly.

It all reminds me of a show out a long while ago called ''Alien Autopsy''. We were supposed to see and alien being in a medical environment. Sure enough there was the ''alien'' corpse lying on the table with the camera rolling. As bosh as it was the funny thing was that when the camera came passing over the genital area of an alien from outer space, the censor still had to blur out the junk. Goofy.

Oh yea, another on was years a go on the old Jerry Springer show. There was this dude who wanted to go through a sex change but he didn't have enough money to get it all done at once. So he paid what he had to start the procedure but it was only enough for one breast. So when he took off his shirt, there he was, a guy with one regular guy breast and one female type breast. We could see the male breast but had to blur out the female breast. Such goofy shlt.

Don is probably the classic three beer man. Nurse one, spill one, give the third one away. Classic non drinker.

originally posted by: Annee
I think I'll stick around in this thread to laugh at the excuses.

takes you back to when Hillary ran for president doesn't it? the whole media was stepping ever which way like a pet owner trying to avoid multiple piles of poo. didn't really work out though but an A for effort despite the fact they stepped right in it. And then Russia................. 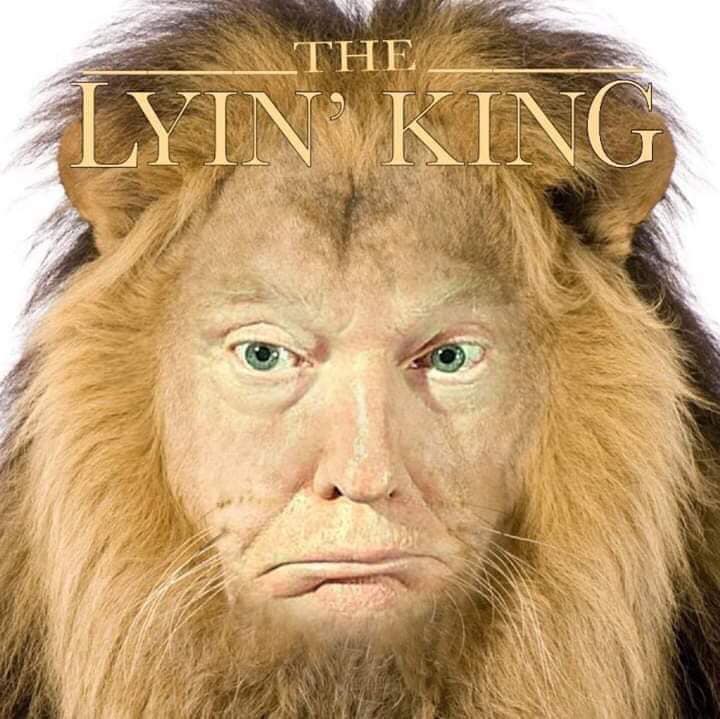 I think in this situation the OP was trying to make a point that Trump is full of the beans - but it honestly is possible for someone who "doesn't drink" have one here and there and enjoy the taste. Anyway, I think you just picked a poor analogy for your post.

posted on Aug, 24 2019 @ 03:56 PM
link
Trump supporters are starting to sound like victims of spousal abuse that are constantly making excuses for their attackers. Sad.

Let me guess, you looked for pic of Donald Trump with a drink in
his hand but could only come up with Lyon King? Well done indeed.

Pics or didn't happen and even if it did who will cast the first stone?

Still better than listening to Bill lie about his heroin abuse and chlamydia
or whatever.