I don't want to be dismissive of your questions, but I am at a loss for just what you are looking for. I do respect you contribution and discussion in this thread. I know it is a tough one to dig through and there is a lot of uncertainty and mixed stories with it. This thread is about trying to resolve 9/11 so it is not all your problem, it is a problem we all share.

How the pattern of the WCT7 collapse is the same as many other controlled demolitions was enough for me to know that explosives where used. I disagree that there is no evidence. Your denial of many facts discussed in this thread does remind me of someone too scared to face the implications.


You mean it fell down

I do respect you contribution and discussion in this thread.


f you choose to be blind to the facts that is your problem.

Gravity pulls straight down. Is that false? How is a gravity driven collapse supposed to collapse?

However. WTC 7 was not a symmetrical collapse. WTC 7 damaged at least two other buildings, clogged up streets with debris, and did not fall in its own footprint. 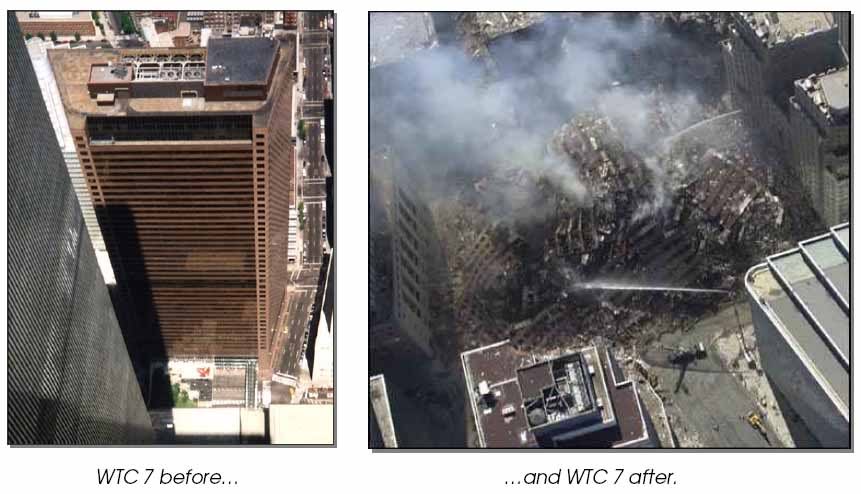 I am not confused by anything concerning there is zero evidence the WTC buildings were brought down by pyrotechnics. Starting with such systems would have never maintained their integrity through jet impacts, debris impacts, and wide spread building fires to initiate collapse as recorded and witnessed.

And I am not confused there are unscrupulous individuals that make a living pushing conspiracy fantasies like WTC implosion. Not because there is actual credible evidence and credible science, but because there is a target audience that believes off of mere speculation. Despite there is no evidence of the towers being brought down by CD in the video, audio, seismic evidence, and no demolitions shrapnel.

And I bet you cannot let this drop. You will reply no matter what. But it will be an emotional plea totally lacking in any stated fact, probably have some attack on my senses, and will be void of actual evidence the WTC was brought down by planted pyrotechnics.

But I guess anything to keep the fantasy of CD alive.

We have already gone through heaps of evidence and have opposing views of what it all means. I do find this curious, in fact critical with what resolution of 9/11 means. There purpose of this thread is to help define how one lives with the implications of this event. In this context well done in being comfortable with your perspective and thank you for helping me find some comfort with my perspective.

I agree there are unscrupulous individuals involved. From this perspective it is more about those involved with the drug, weapons and human trafficking trade. Lot more money in that than in some books and conferences.

CAN YOU CITE PROOF OF CD FROM THE VIDEO, AUDIO, SEISMIC, PHOTOGRAPHIC EVIDENCE OF THE COLLAPSE OF THE WTC BUILDINGS?

But it will be an emotional plea totally lacking in any stated fact, probably have some attack on my senses, and will be void of actual evidence the WTC was brought down by planted pyrotechnics.


Spot on as it turns out


Will you be able to describe this 'pattern' or is this yet another example of the things that Truthers come out with that sound impressive to themselves but lack any substance whatsoever?

I'm putting my money on the latter

I have tried, but you perspective is that it is the work of an Charlton. To avoid any bias here is a compilation of videos from that day. Clear, hard evidence.

Nothing beyond "something doesn't seem right to me". You have to remember that conspiracy theorists don't like facts and evidence, they just go with feelings

Just for once I'd like to have a grown up conversation with a Truther who wasn't insane or a lying coward
edit on 13-9-2019 by mrthumpy because: (no reason given)

Not as important as gut feelings

I want to see the evidence for CD too. Especially for the towers.

I don't mess with building 7 material, the thing about building 7 is there was the old campaign about how people didn't know about that other tower that also collapsed on 9/11 and if we just told them, and told them no plane hit it etc. But it doesn't matter you can tell people anything. People can think whatever they want, then WTC 7 just becomes another limited hang out He said She Said. That leads nowhere.

I hope you don't think I'm against you based on my last post but how long is this going to go on? One side says CD the other side says Gravity. 9/11 was 18 years ago now. That's a pretty good run of loggerheads. Who knows how long it could go.

If you got evidence of CD you need to produce it.

My thing is a little different, I want to know how a gravity collapse hurls a huge chunk of steel into an adjacent building. Heck, even actual CD jobs they show on youtube and news clips don't do that. Maybe they hang sheeting and get people to stand back but they don't impale neighbouring structures with massive chunks of debris.

Now I got pics of the steel hanging out of another building, that's evidence. So where is the real CD evidence?

I don't think you got any, I don't even think there is any.

But think about it, does that really mean we then have to accept the Official Story? Really?


Youtube channel The Dollar Vigilante does have a good perspective to things. As for how tries to resolve 9/11, he is glad to see a majority of people are waking up to it. Understand some people are scared to talk about it and some concerns that a similar event may happen again. Accepting that some people have there own views about it is a path they need walk.

America, the land of the free.

Spot on as it turns out

I have tried hard to take emotion out of it. But how can we resolve a problem without addressing the emotional side of things? Maybe if you do not have any emotions you can, but for the rest of us that do it is another piece of the the problem.

Analysis of Eyewitness Statements on 9/11 American Airlines Flight 77 Crash into the Pentagon by Penny Schoner
Original Presentation: December 2003 Updated Hypertext Version: 21 February 2004
Contents
1. Introduction
2. List of Points regarding plane hitting Pentagon
Eyewitness Reports:
3. Before and After the Plane Crashed the Pentagon - Eighty-Seven Witness Statements
4. Of Jet Fuel
5. Of Plane Clipping Lamp Posts, Sign
6. Of Plane Parts After the Crash
7. Referring to Missile-Like Plane
8. On the Sounds of Jet Engines Before Crash
9. Regarding Reinforced Walls of Pentagon
10. Of Other Aircraft in Area of Pentagon
11. By Radar Operators
12. Of FBI Combing Area After Crash
13. Photographs of Crash Site and Parts of Plane
14. Index of Names

“no evidence of a plane hitting the pentagon” is a blatantly false and blatantly ignorant argument.