Is there like a time of day where it's 'Sopressata Time'? Is it okay if you eat it before 6am? How about 8am?

I've got a buddy of mine who makes homemade Sopressata the old-country (Italian) way, and it is sooooooo good it will make your knees weak eating it!! I swear he puts crack in this stuff because I just can't stop eating it! It takes so much time and effort to make it, and so precious little time to gobble it down, it's just criminal.

I offered to pay to convert his entire house and barn into a Sopressata production facility! Just quit his job, and do nothing but make this fabulous salame...forget about the wife and kids! We'll just drink beer, make sausage, eat sausage, drink more beer and sit around later telling tall tales while pharting.

I'm not allowed to go over to his place now I guess, says his wife unit is pretty handy with knives and stuff and she's gonna' cut me. I think I'm pretty close to talkin' him into doin' it though! (the idea about Saran wrapping his wife and eldest daughter up (together) into a UPS package and shipping them to his mother in law's place got some serious traction!). But I digress...

Anyway, is there ever a time when it's too early to eat this stuff???
edit on 5/27/2019 by Flyingclaydisk because: (no reason given)

coppa or prosciutto with warm rolls and coffee for breakfast. My staple breakfast every time I holiday in Southern Italy.

I'll help you tie up the wife and then we make the meats!

posted on May, 27 2019 @ 07:58 AM
link
I like a good Sopressata . My Italian friend died of old age, he and his brother made it and their recipe was really good. Now, the local Italian market has a good sopressa at about nine bucks a pound I think, and I go there and get it sliced paper thin. But of course, the government got involved and banned making it by hanging it in rooms with sand floors, so it isn't as good anymore. One company had a big area for aging, and they had to alter the way they made it and it is not as good as it used to be. That was the talk of the Italian community around here for a while, Crabby Italians, can you imagine that happening?


Eff no. I just made eggs with nduja.

I've always like savory things for breakfast, even as a kid. I don't like sweets, and the exception in morning time during childhood may have been the rare bowl of cereal.

My mom still gives me hell to this day because one of my favorite things for breakfast was perogies. She still tells me she would dread asking me what I wanted to eat in the mornings fearing I'd ask for perogies. She was never a parent afraid of saying no, so I didn't get it all the time... But her being a Saint like many of our mothers, she would fulfill the request often.

To this day, sometimes my comfort breakfast is perogies. It brings me back to another time.

Moral of the story, eat whatever you want for breakfast. Unspoken rules are the best ones to break.

I had leftover ribeye that I grilled last night at 12:30 in the rain. I used lump hardwood coal and chunks of pecan to have a giant flame. I like a good crust but still med rare.

So I had about half of that for breakfast with some of the batard I baked last night and roasted garlic compound butter.

posted on May, 27 2019 @ 02:36 PM
link
I had a sausage once that is similar to sopressata. It was homemade by a ‘coalcracker’ from the PA anthracite region. They were made of pork but were cured while being pressed between planks while submerged in olive oil, weighed down with bricks.
It was very good.

Have you ever tried perogies with fruit filling? They are awesome!

I have, and as long as they're fried with salted butter with a little extra salt I like them sparingly. I'm not big on sweets, but if it's with salty I can dig a little.

Regarding perogies, we were stationed in Michigan one time and I used to go down to what they called "Pole Town", or the Polish area of Detroit. Between the perogies and the kielbasa they made down there, you'd be lucky to make it back to your car without exploding! Oh man, was that stuff good!!! The Polish community makes some of the most incredible foods, and perogies rank high on the list! We used to get these ones which were stuffed with this meat and spinach / green cabbage combo along with a gravy which would make you...wait for it...jump right out of your socks!

ETA - Great people too! And, if you went to the Polish bars afterwards they told the best Pollack jokes of all!
edit on 5/27/2019 by Flyingclaydisk because: (no reason given)

Funny you say that. My mom lives in Michigan now, we go to a 100 year old~ polish restaurant on a bluff overlooking the lake. It's called legs inn. I'd add pics but I'm surprised I have service enough to post on this mountain even though I'm closer to town.

A polish immigrant came and enlisted the help of natives to make a wood and stone cabin looking restaurant with intricate wood carved sculptures in it. They have an incredible beer selection, a breathtaking garden by the lake and smoked homemade kielbasa and white fish.

Their rye bread is bar none too. 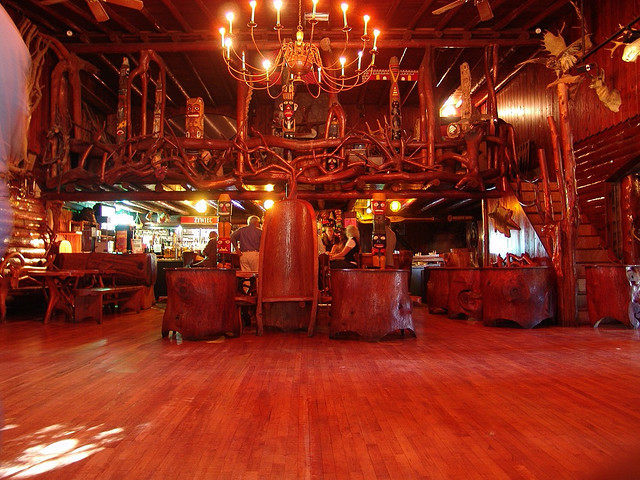 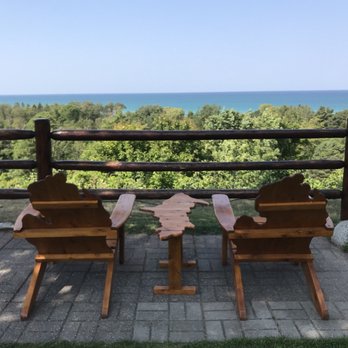 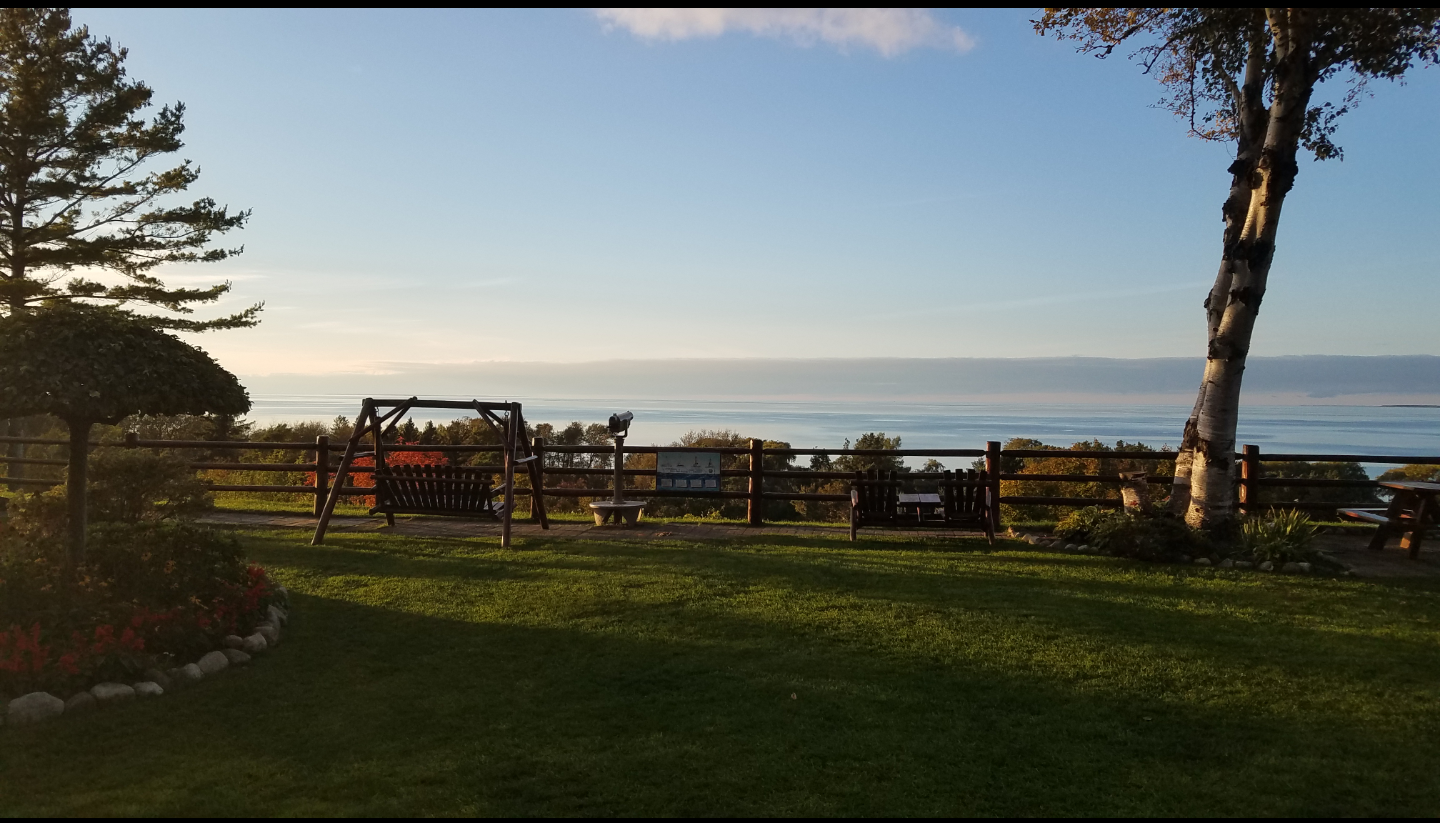 The very past pic is mine.

The rest I pulled from the intranets

Oh, and if you ever travel to the area, go if you like polish food.

The food is great, but not the best. The drive to it and the ambiance make it for one of the few places I can find peace. One of the other rare places I had the privilege of being at tonight.

I feel guilty for how enjoyable my drive home was down a mountain after a day no one deserves.

On Lake Michigan in the far northwestern end of the lower peninsula. Depending on which you're more familiar with, it's SW of the Mackinaw bridge, or NE up the coast from Traverse City.

I've never been there, but it's very well known in the state. Thanks to neighbors' unanimous raves about it, it's a contender for our eventual northern lower peninsula vacation ("Rent a cabin, RENT A CABIN! You'll love it!! And don't forget to pig out!")

That whole outdoors on the lawn dining shtick has me really sold on going there for a few days, maybe next year. Our vacation plans for this year didn't work out, but next year's might. Hubby's favoring Sleeping Bear Dunes, but honestly, I don't see why we couldn't split the difference and hit both areas the same trip.