originally posted by: odzeandennz
This is remarkable.

But I want the raw data.

I want the entire spectrum of light, the entire fields at which they took each photo to composite them, i want the size of the disc, hawking radiation, what is directly behind the black hole from our point of view and can we verify there is a time warp between it and whatever galaxy is behind it. ..

I want to know the instruments that were used, multiple telescopes in this case..

Why is science being dumb down for the masses?

Why aren't we captivated by rocket launches and the possibility of landing on Mars or the Mariana trench?

Science is becoming something bohemian when anti-vaxxers are letting their kids die and pictures of a blackhole is just a 'meh' event and the public gets a #ty image and no salient information.


According to the Q&A afterward the reveal, one of the scientists said it would 1.5 days at light speed to get from one side to the other, unless I misunderstood him.

No you're right. We're essentially looking at shadow of light casted before we see the light.


If anyone else as interested as I am in what basically is a hole to either nothingness, or another universe, here's a good informative video.


That's a loooooooong distance to cover... I knew they were big but I never dreamed that Betelgeuse was just a little pin prick next to M87. I wonder what it would be like to travel through one if a craft were capable of it.

Scientists have obtained the first image of a black hole, using Event Horizon Telescope observations of the center of the galaxy M87.

I don’t know how to enbed a photo Can anyone tell me how?

While we're all in awe over this first ever picture, here's a little fun fact... The image we're seeing is an image of what M87 looked like 55 million years ago because that's how long it takes light to reach us from that region. That's just crazy, imagine what this black hole looks like now.


Same as it did then. Super-massive black holes like this one don't change much over billions of years, perhaps only growing a bit bigger. 55my is almost nothing in cosmic time scales.

While true, think about where we'll be in 55,000,000 years. If humans are still alive, or even our solar system, and they captured a picture of M87, it would be a picture of what it looks like in our time. It sounds silly, but I find it so fascinating that what we're looking at in that image (which is live time to us) is what it actually looked like when dinosaurs were here. SO CRAZY.
edit on 10-4-2019 by LSU2018 because: (no reason given)

originally posted by: LSU2018
a reply to: ChaoticOrder


Well what does warp speed mean? Einstein's theory of relativity indicates it's impossible to reach the speed of light, but a warp drive could theoretically move faster than light because it warps space around the ship rather than moving through space. The math of relativity indicates that any mass moving faster than light would begin moving backwards in time from some frames of reference, but since a warp drive isn't actually moving mass through space I'm unsure what would happen at the speed of light, but I highly doubt it would allow for traveling through a black hole. You'd probably need enough energy to cancel out the warping of space-time caused by the black hole, but even if you could get enough energy it'd still probably be impossible.

posted on Apr, 10 2019 @ 10:17 PM
link
Regarding the image, one thing to consider is that it's just a few pixels across. The smooth, "out-of-focus" appearance is due to how they smoothed it out to look better.

The white circle in each picture represents the resolution of the EHT. That makes the accretion disc about 4 pixels wide.
edit on 10-4-2019 by wildespace because: (no reason given)

originally posted by: oldcarpy
a reply to: Bloodworth

posted on Apr, 11 2019 @ 06:39 AM
link
I think that my cat's anus would look the same without autofocus.
Oh boy our scienctists behave like gods that know everything but can't even take proper pics yet.

Well, seeing as how it is 55 million light years away and about 40 billion kms across and was done with radio telescopes not optical ones what sort of "cosmic debris" do you think you might be able to see? And it's not NASA.

It's done with radio telescopes FFS. And it's 55 million light years away so what the hell did you expect?


Oh boy our scienctists behave like gods that know everything but can't even take proper pics yet.

These pics not proper enough for you?


originally posted by: oldcarpy
a reply to: Bloodworth

First of all, NASA's "Camera Story" from the 1970s falls 100% in line with what a person would expect taking a picture of stars using the exposure settings required to take pictures of the astronauts walking on the Moon's bright surface. Those exposure settings would be similar to the settings of a camera on Earth taking pictures in daylight...

...That is, If I used those exposure settings on Earth, or exposure settings for taking a picture on a sunny day, and tried to take a picture of stars in the night sky -- even on the starriest of nights -- I would not expect to see the stars showing up in the picture, even if they were visible to my eyes.

But back to the point of the thread. The Event Horizon Telescope (EHT) does not use visible light; it uses radio to take images. And the EHT is not even one telescope. It is a network of many radio telescopes spread all over the world. By using these telescopes together in a certain way, they can act as one very large telescope.

The radio background against which this black hole sits is extremely bright, so they had to only use the data coming from their target to create the image. The black hole is at the center of galaxy M87, which is pictured below. That bright blob in the image below is not a star, but an entire galaxy of billions of stars. The black hole is just a tiny speck in the center of that galaxy, which is 55 million lightyears away. 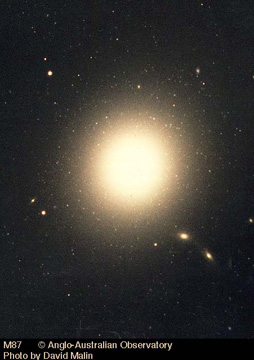 The global array of telescopes gathered may petabytes of data that needed to be analyzed, sorted through to find the relevant black hole data, and put together in the form of a single image. This was done through a complex algorithm and a process called very long baseline interferometry (the "very long baseline" being the distance between the various telescopes used). The decoding of the data to get this image took almost two years.

That image of a black hole you saw everywhere today? Thank this grad student for making it possible

There will be a special on the Smithsonian Channel tomorrow night (Friday, April 12) at 9 PM Eastern Time about this image. I think it will be discussing this image from the collection of the data to the decoding of the data into that final black hole image. So maybe it will answer some of your questions.

originally posted by: LSU2018
a reply to: ChaoticOrder
Do you think, if we had the ability to travel at warp speed, we could travel through it?


originally posted by: LSU2018
a reply to: ChaoticOrder
Do you think, if we had the ability to travel at warp speed, we could travel through it?

Just have Q create a strong enough static warp shell to protect the ship and the traveler to provide the needed speed to get through it.