This past week, an outbreak of late-Winter tornados killed 23 people in Alabama. President Trump and First-lady Melania, went and gave comfort to survivors, after search-rescue operations were completed.


A recap of President Trump and First Lady Melania thanking rescue and recovery workers, and visiting families and communities devastated by recent tornadoes in the Southeast.

The local residents were intensely appreciative of the response from the Trump family.

Image caption: The crowd cheering when President Trump took a picture with Gatlin, a 12 year old who has been volunteering at Providence Church all week. The President also signed some bibles.

More info on the tornado outbreak itself, at: www.al.com...

America is very blessed to have a President who has "Americans and America FIRST" as his #1 Job Priority!

posted on Mar, 9 2019 @ 12:35 PM
link
OH come on now.
I applaud the Trumps' visit to Alabama, It is one of the presidents jobs to act as a unifier in times of chaos such as those twisters in that state.

But it is his job. To think that this is any thing more than a photo op or that we are the recipients of some God given blessing just to have this guy handing out condolences is quite a stretch.

All presidents do this, demonstrating our national support for victims of unfortunate occurrences such as this are just doing their job.

So yeah, kudos to Mr. and Mrs. Trump.

You would think it would be a situation where everyone could pull together over a tragedy, but what did i see this morning?..... Ppl in the media WHINING about the fact that he signed bibles when asked.

originally posted by: TinySickTears
is there where he was signing bibles?


Who care what he was signing, he was there for the people.

(post by TinySickTears removed for political trolling and baiting)
Mach2


originally posted by: TinySickTears
is there where he was signing bibles?


Who care what he was signing, he was there for the people.

Some ppl wouldn't give him credit if they were drowning, and he threw them a rope.....wait, thats exactly what he IS doing.

(post by Muninn removed for a manners violation)
Breakthestreak

posted on Mar, 9 2019 @ 01:14 PM
link
It's terrible when a kid dies and there were some kids that died in that event. It is hard when the place you called home for years is gone too, a new house does not have memories associated with it....It is not always the same. I would not want to lose the house I built and get another house built by someone else and lose all of my junk I inherited through my life only to get stuff of equal value money wise but has no memories attached to it.

It is worse to see your kid die than to see your older parent, the kid has a whole life ahead of them. My mother had to see my sister die, it bothered her greatly. I would never want to see my kid die, I would rather I was taken in their place, but we do not have a choice most times.

It is nice that trump and his wife were more concerned about the people than the loss of money, the insurance pays for your house, it may not be the same as what you had but nobody died or got seriously hurt anyway.
edit on 9-3-2019 by rickymouse because: (no reason given)

Explain the bible autographs though. Does he think he's god?

originally posted by: LordAhriman
So like what every president does in any large natural disaster. Gotcha.

Explain the bible autographs though. Does he think he's god?

What's to explain? He was asked by the parishioners. Should he refuse in those circumstances? Presidents have done so before.

Doesn't all that hate leave you empty inside? 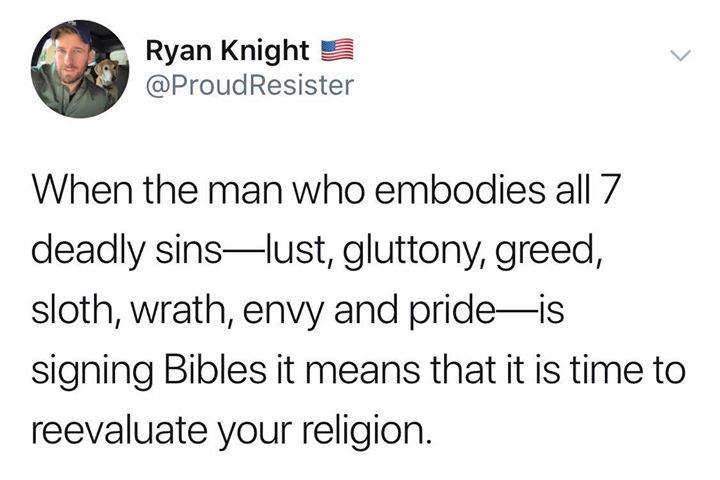 Christianity: The religion where you can adjust the teachings to fit your worldview.


originally posted by: TinySickTears
i will say i would absolutely love to have a bible autographed by king orange.

I’d love one of those ‘madam president’ magazines with the failure that is hilary clinton (the racist) on the cover.

The President has signed quite a Number of those. He was laughing and smiling as he signed them too. I bet he still laughs whenever he thinks about that magazine. Like we all do.

I’d reserve a high place on the shelf for it.

Christianity: The religion where you can adjust the teachings to fit your worldview.

I would say that the poster Ryan is the one with a world view problem.

He is a proud resister though...

So like what every president does in any large natural disaster. Gotcha.


If you spit in someone's face, you really can't expect a helping hand now can you?