Democrats Want Your Guns (Even By Executive Order) But Can't Explain How To Rectify This Situation:

posted on Feb, 17 2019 @ 12:18 AM
link
Arizona is a gun loving state. There is no denying that. But I have already heard from many many gun owners that they are waiting for the day. Most Ex military.

posted on Feb, 17 2019 @ 12:30 AM
link
She is just saying that if Trump wants to push the executive power to the max, then the next democratic president will do so too. Basically saying it sets a standard for working around congress-president agreements..

Trump got a bad deal for the wall, and now is using power to override that.. It does look bad on his part... Basically saying "executive says "# you" to judicial powers....

It's not good for the constitution. One man shouldn't make all the big decisions, despite left vs right turmoil, or presidential opinion..

I know someone who was gut shot
They spent several months in the
Hospital and they're staunch
2nd amendment supporter.


Supporting gun rights = all gun laws must be legal....

This is the idiocy that the right brings...

She is just saying that if Trump wants to push the executive power to the max, then the next democratic president will do so too. Basically saying it sets a standard for working around congress-president agreements..


No, she's saying that the first thing she can think of to do to harm conservatives is to override the Constitution... the one she took an oath to uphold. And there was no "Congress-President agreement"... there was a demand by Congress that we are doing to do things their way and to hell with the Presidential powers or the safety of America. "No" is not an agreement.

Trump got a bad deal for the wall, and now is using power to override that..

It's not good for the constitution. One man shouldn't make all the big decisions, despite left vs right turmoil, or presidential opinion..


One man does not make any permanent decisions according to the law. All Congress needs to do is pass a joint resolution terminating the National Emergency.

Have you read the law on National Emergencies?

It is quite disconcerting, disturbing, that the left, under a Democrat president, would use their ideological agenda as the basis for declaring a national emergency. For Speaker Pelosi to hint that an individual act of violence presents grounds for a Democrat president to enact a national emergency is Constitutionally dangerous. I must ask, Ms. Pelosi, what would be the specific details of a national emergency on “gun violence?” Does this mean that by way of an executive order, action, the left will erase the Second Amendment? Part of our Constitution’s individual Bill of Rights? Does this mean that a Democrat president would authorize a violation of the Fourth Amendment and nationally violate due process criminalize millions of innocent Americans by way of firearms confiscation . . . forcibly?
theoldschoolpatriot.com...

I don't know if they will ever recover... Kind of going the way of Stalin, Lenin or Castro.


But , I would like too see em try
Because that WOULD constitute a National Emergency

Suspend Congress and rid it of all the treasonous folk there
Pelosi , Warren , Schumer , etc.
Then hold elections for those vacant seats .
Reestablish Congress
Job well done


As much as I don't like Pelosi, she does makes a good point. Mass shootings have become a common thing in America. I have relatives in Canada that can't understand why the gun laws in America are so lax.

Try reading them, because they aren't lax.

1. There is a law against murder.

2. There is law for background checks.

3. The shooting in Illinois wasn't stopped by their GD universal background checks.

4. Gun control is a direct violation of our civil liberty. 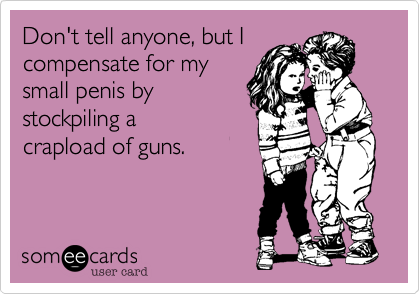 originally posted by: PraetorianAZ
Arizona is a gun loving state. There is no denying that. But I have already heard from many many gun owners that they are waiting for the day. Most Ex military.

Gunphobes overcompensate for their small junk by violating peoples 5th amendment right to NOT be held answerable to a capital or otherwise infamous crime.

whatever you say cowboy

gonna show us your boots?

We're the Indians, and Pelosi is Columbus.


Im fairly sure you meet close to 100% of the Soy Boy standards. 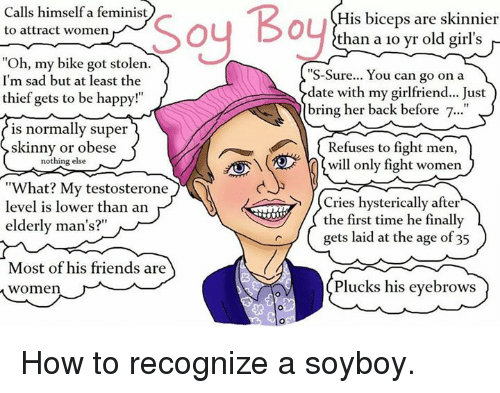 posted on Feb, 17 2019 @ 09:19 AM
link
Am I missing something? I thought they were wanting more gun laws/control and wanting to ban high mags? I’m not seeing where they want to ban Americans from owning a gun. That will never happen.. stop putting fear into someone that’s not justified.
Worry about your dictator who rage tweets on the throne.

This is exactly the difference, but the left doesn't care about our rights. They have an agenda , whether they can explain it or not. We need to vote out all the rhino's ( RIGHT WING AND LEFT WING). They all drink from the same straw, they all take the same money. they are both corrupt. THEN, we the people, need to completely remove all campaign finance from any corporation sand all special interest money from our politics. No better way for your senator or congressperson to stop "representing" you and start lining his/her pockets. We need to bar members of congress and there families from obtaining high level posts in corporations where they have voted on legislation. We also need to stop them from having any separate retirement and healthcare. We need to stop these millionaires from taking our resources like flights all over the world on our dime. THERE NEEDS TO BE ACCOUNTABILITY. They would have to have a good reason for being given anything of OURS. We then need to aggressively prosecute all of those that have sold us out. follow the money. It will be REALLY EASY......start with ANY career politician that has only had one job.....representing us....and now they are MULTI millionaires with expensive homes all over the country. maxine waters comes to mind. she doesnt even live in her district! NOW fellow Americans......ANYONE that doesnt repsect our constitution and its FRAMEWORK. Anyone that Wants to delete any rights or add a different narrative, like socialism, can just simply leave. if you dream of a different utopia then go THERE...where you want to model our country after it. Like venezuela...... go ahead. you dont need to change this country. Its already there....a plane flight away. Our consistitution doesn't include EVERYTHING on purpose...but what it does include is NON NEGOTIABLE.

Gunphobes overcompensate for their small junk by violating peoples 5th amendment right to NOT be held answerable to a capital or otherwise infamous crime.

You used too many big words for him to understand.

posted on Feb, 17 2019 @ 12:06 PM
link
I say they need to put their money where their mouth is. Draft an amendment proposal to overturn the 2nd, put it to the states and see what happens. Might want to build a self sustaining lunar base and a fleet of shuttles beforehand, but that is just a suggestion.

Yeah, you are missing something, like the facts, but at least you included a little dig on Trump. Pathetic

posted on Feb, 17 2019 @ 03:54 PM
link
Here is the root of the problem. Democrats are no longer "American", they're not J.F.K. American's. They are Socialist/Communist. They desire a "Democracy" because a democracy sounds like an easy way of life. It is a herd mentality. This is the gospel of Karl Marx. Karl Marx wanted a "Democracy". It is in the Communist Manifesto. Which ain't a bad teaching in itself. Other than it requires men to be men and women to be women.
The United States is not a "Democracy". It is a Republic, ruled by law. The "majority" has no say in an individual "right". That is the "law"! That is the "Constitution", that is "The Standard"! That is what they seek to change.
Guns are as much a threat to their ideology, "democracy" as a hammer, sickle, or free throught. Freedom minded individuals can get a "gun" with a hammer or sickle.
"Law" doesn't do anything other than make, "outlaws". With that said? America is very much like Rome before it fell. World history proves America and it's "educated" deserves what it gets.
There is nothing new under the sun.