WASHINGTON (Reuters) - The U.S. Navy admiral overseeing American naval forces in the Middle East has been found dead at his residence in Bahrain, the Navy said on Saturday, adding that foul play was not suspected.

Vice Admiral Scott Stearney, a Chicago native, was the commander of the U.S. Navy’s Bahrain-based 5th Fleet. The Navy did not specify the cause of death.

Holy Crap, that seems important..
If there was foul play, would they tell us?

originally posted by: Peeple
a reply to: Agit8dChop


This is utterly important! His death has been stated as a suicide before an investigation has been started. Then it was announced that NCIS and Bahrainian Intel services will be conducting the investigation. Now there may be nothing wrong with that, but since this Admiral was in charge of the middle eastern US Fleet and that a certain somebody passed away just the other day. A certain somebody that had deep connections to the goings ons in the middle east. Don't you think that this might be a little more important then just a passing glance?

It was suicide? How do you know that? Certainly not from the link.

I do not believe it is, at present, and going after an Admiral of the US navy would mean your country is now part of the history books, and the World would not question are fury, but likely help.

"Admiral Stearney, an FA-18 fighter pilot and former Top Gun instructor with more than 1,000 landings on aircraft carriers, had previously served in Kabul, Afghanistan, as chief of staff of Joint Task Force 435, which trains and advises Afghan military and security forces conducting detention and other operations there"

No matter how you feel about our military, he was one of the best we had, and for now, deserves honor.


RIP Admral. I will find 21 guns to shoot for you even if virtually.

There is another article about it that suggests that suicide was the cause. At first though all the reports were saying is that it was not "foul Play". I'll put out the link to the article in the morning.

He was an Admiral, admirals are old, and work under ton of stress. Who knows why people kill themselves? If he was under investigation, usually they would say that to mitigate any bad pr.

CBS is reporting as probable suicide as are other sites.

Vice Adm. Scott Stearney, who oversaw U.S. naval forces in the Middle East, was found dead Saturday in his residence in Bahrain, officials said. Defense officials told CBS News they are calling it an "apparent suicide."

"This is devastating news for the Stearney family, for the team at 5th Fleet, and for the entire U.S. Navy," Chief of Naval Operations Adm. John Richardson said. "Scott Stearney was a decorated Naval warrior. He was a devoted husband and father, and he was a good friend to all." 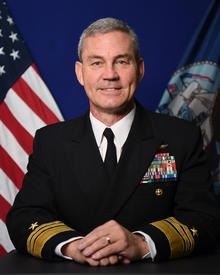 The Naval Criminal Investigative Service and the Bahraini Ministry of Interior are investigating Stearney's death, the Navy said, but foul play is not suspected.

Stearney, a native of Chicago, joined the Navy in 1982 after graduating from the University of Notre Dame, according to his official biography. He became an aviator in 1984 and flew the FA-18 Hornet in several fighter squadrons and logged more than 4,500 "mishap free" hours of flight.

The 5th Fleet operates in the Arabian Gulf, Red Sea, Gulf of Oman and the Indian Ocean, including the critical strategic choke points of the Strait of Hormuz and the Suez Canal.