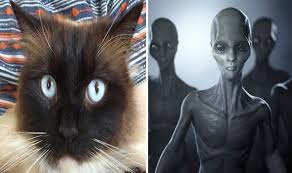 After over four hundred killings, even The Washington Post has been following this story, and yesterday reported the UK Metropolitan Police's conclusions as they closed the case:


By working closely with forensic experts, partners and colleagues, we have been able to eliminate the hypothesis that a person or persons were travelling the county and mutilating animals on a serial basis. As explained by our colleagues in the Metropolitan Police, the evidence suggests that the animals had been predated by foxes; in a rabbit’s case after being removed from a hutch, and in a cat’s case after death likely caused by a road traffic collision. I hope this conclusion brings comfort to pet owners who have, up until now, been frightened to let their animals out at night.


Wiki has a typically dry, earthbound article about the case where you also can find some extended statistics. The UK tabloid press have, of course, screamed crass crowd-pleasing labels such as “The Croydon Cat Killer!” or “Jack The Ripurrr Strikes Again!” But foxes, squirrels and rabbits have also fallen victim to this evil presence since 2014, possibly longer, the perpetrator even travelling as far north as Manchester, which itself may point to it not being the same attacker. The fact that raw chicken was found in the stomachs of some cat victims may be evidence of them being lured, but does not account for the majority of deaths, and, any case, contradicts the police's final conclusion.

Police and animal pathologists were stumped for answers, although the local organisation SNARL (South Norwood Animal Rescue And Liberty) still believes there is evidence of human involvement. SNARL began investigating in October 2015, and three months later a 30,000-strong petition pushed for a DNA analysis by police. A £5000 reward was offered by PETA (People for the Ethical Treatment of Animals), and even celebrities such as Martin Clunes and Dermot O'Leary pleaded for public help and support.

So, it's no wonder that Breakfast TV was keen to report yesterday's conclusion, too:

So far, so earthly, but the ET angle has also been floated around as an explanation, laughed at by the MSM, but they are naturally not going to examine the finer details of cases that do not relate to a scavenger or vehicular collision - similar to cattle mutilations, there is never any blood at the scene. Sharp implements are used to eviscerate the bodies, usually also removing heads and tails before bodies are left 'on display' in someone's garden or yard. In other words, the animals are taken somewhere else for mutilation – reminiscent of NIDS' experiences at Skinwalker Ranch where evisceration in one case 'invisibly' occurred within 30-40 minutes whilst people were only a few hundred yards away. Impossible, yes, but as NIDS' Colm Kelleher opined, it IS what happened.

Linda Moulton Howe (I know I know) digs her claws into this UK mystery. I haven't seen this video yet - getting late here and I have rushed this OP! - but will add any useful info in due course.

Have the police just thrown in the towel and given up? I need to look deeper into the cases that do not match the predator/collision hypothesis, but do any ATSers believe there really IS more to it than this arguably lazy conclusion to get it off police books? Why should cattle be the sole focus of the ETH?

The killings, after all, will no doubt continue.

Or am I on a hiding to nothing? Feel free to throw tomatoes and cat litter at me.

posted on Sep, 21 2018 @ 09:16 PM
link
I think ET's would be more interested in studying human beings, instead of mutilating animals. I think the practice of Satanic Rituals and Masses are a lot more common worldwide than people realize. Perhaps this is the cause for some of these feline deaths and mutilations.
edit on 9/21/2018 by shawmanfromny because: (no reason given)

posted on Sep, 22 2018 @ 02:29 PM
link
There is a lot of NOISE in this case. Obviously there could be copycat killings (no pun intended), and cases that are simply brutal cold-blooded sadism but not related to the CORE mystery.

The above interview Moulton Howe conducts with UK animal mutilation Investigator Ian Halling is a welcome, more quiet overview away from the tabloid/social media frenzy. Like the police, Halling disputes a "knife-wielding maniac" due to a lack of human DNA at the scene, but unlike the police, dismisses predators or vehicle collisions for a specific set of victims, adding that exotic reptiles have also suffered the same MO. I've seen a similar report of an owl, too.

Of 100 cases carefully studied by SNARL, veterinarian necropsies of half that number confirmed bloodless excisions on the bodies' internal organs, be-headings, and a lack of any blood or tracks around the sites where the creatures were found. It's strange that a population of 370,000 - with CCTV covering the entire area - has never seen or heard a disturbance, even with many killings occurring in broad daylight.

Halling also reports on a less deadly but just as bizarre phenomenon occurring near Croydon where cats have suffered patches of fur being shaved off before being returned to the owner alive - but the event is repeated up to three times in some cases. There is strange and there is STRANGE; I certainly cannot think of a motivation here!

Perhaps Halling's most interesting observation is how the latitude line 51.7 seems to attract High Strangeness of this type, such as horse mutilations in Wales during 2012 and 2017, as well as the infamous Welsh Triangle cattle killings in the 1970s. The Croydon case itself may never provide clear answers, but this line of investigation could prove fruitful.

posted on Sep, 22 2018 @ 07:24 PM
link
With regard to degrees of latitude, in the USA, intrepid rancher Chuck Zukowski is convinced that a significant number of cattle mutilations - along with other grand UFO events - are all linked to the 37th parallel.


"I started to realize the cattle mutilations, UFO sightings and major events like Area 51 all lined up,” Zukowski said, referring to the 37th degree of latitude, which forms the borders between Utah and Arizona, Colorado and New Mexico, and Kansas and Oklahoma.

The true believer had investigated more than 1,000 paranormal incidents over 30 years — and 200 of them landed on the 37th parallel.


Whether strange deaths of cats, rabbits, snakes and owls in the US regions are subjected to the same scrutiny and provenance is a worthwhile question. But considering how the UK Cat Mutilation case has attracted so much laughter - irrespective of causes - compared to the similar fate of cattle, does it say more about the human psyche than anything else?

Size, it seems, really does matter in this phenomenon.

I live in Portsmouth and we have had several cat mutilations over recent years, two last month that the police are linking to the london cat killings, some have been absolutely horrific mutilations with heads removed ect.
Just really hope the authorities catch the sick bastard that's doing it.

originally posted by: shawmanfromny
I think ET's would be more interested in studying human beings, instead of mutilating animals. I think the practice of Satanic Rituals and Masses are a lot more common worldwide than people realize. Perhaps this is the cause for some of these feline deaths and mutilations.

Then again, if the ETH is true, there will eventually be a limit to interest in human anatomy.

If we were in the ETs' position, we would probably study these strange domestic furry beings for the very reason that humans worship them (or even act as their servants in my case, lol), even more so in historical terms, eg Egypt.

Would we eviscerate them? I'd hope not, but you know what we're like.


I still struggle with the Size Factor associated with animal mutilations - anything smaller than cattle and it seems an air of mockery ensues.