"Sorry. If some innocent men's reputations have to take a hit in the process of undoing the patriarchy, that is a price I am absolutely willing to pay."

All this time, I thought the #metoo movement was about "safe work environments" and stopping "unwanted sexual advances" - REGARDLESS of the genders involved. Peace and love and all that.

I've must have been naive.

It's just another money grab.

Priority one is to "undo the patriarchy". What? Is the sting operation "divorce" no longer working out for the women of the world? Is the fact that rabid feminists hate men so much that they have gone full-on dyke cut them off from divorce settlements - since they wouldn't dream of marrying a "toxic masculine"?

These few man-haters have ruined everything that was good about the feminist movement to begin with. We can all be grateful that these extremists are still a minority.

I guess what we men need to do IF they ever become a dominant force in the world, is to say: "Fine. Have it your way. Here's a coverall. Go dig your own diamonds. Here's a pair of boots. Go fish your own crab in the Bering strait. Here's a jar of jelly. Open your own damn lid. I'll be on the front porch reading the newspaper."

You can't have your cake and eat it.

I think these extreme feminists would come to a surprise realization if all men suddenly just disappeared.

And indeed - a lot of women would have a very, very bad payday.

And that's just the financial side of it.

The really ridiculous part is that the very same feminists who cry "RAPE!" every time a man even GLANCED at an ass 30 years ago, seem to have NO problem with the gang rape epidemic in countries like Sweden.

I guess it's only rape if a man with money is behind it. He doesn't even have to have done ANYTHING.

What kind of a person wants innocent people to lose their job over false accusations?

We sensible men and women of the world must NEVER let these extremists get away with this.

They're just idiot children that everyone feels sorry for. That's why they always get everything they want. Government is the parent, and the feminists are the spoil brat children, who wouldn't be able to survive, were their Parent ever to fall.

She upset me so much my man-uterus, my "muterus" is achy.

I need a hot bath, some chocolate and wine. 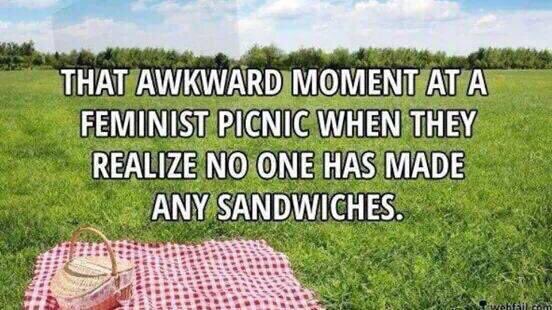 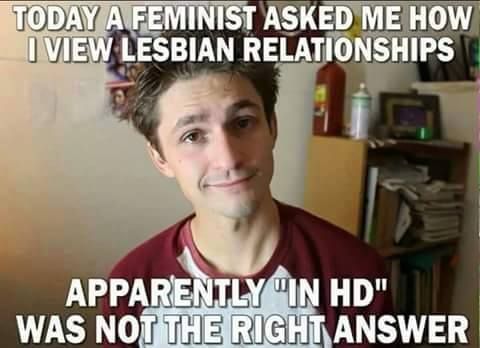 posted on Sep, 20 2018 @ 09:28 PM
link
At least they have their fearless leader Hillary Clinton. She couldn't beat Obama or Trump (or Bernie without cheating) but she will always be President to the other lesbians.

okay, hon, but your gonna have to put that paper down...
sally needs a ride to school, you're gonna need to leave a little early if you gonna be on time for the baby's dr.'s appointment, and don't forget to call my boss by 10 and tell them that I will need to take a few days, or weeks off, while I go off and hunt myself up some diamonds. I haven't picked up the groceries yet so there isn't much there. if yo can't find anything to your liking, either do the grocery shopping or order a pizza or something. make sure you check over sally's homework, hope you understand the new math system. and, please, feed the baby food to the baby and not the cat like you tried to pull last time!

lol... thanks for the few days or weeks vacation from the kids and housework!! fool!! hasn't even noticed I don't wear jewelry and could care less about diamonds!!!

Didn't you just beg for a man to fix your car problem?

posted on Sep, 20 2018 @ 11:00 PM
link
a reply to: Toolman18
no....
I asked for advice about my car...
or more importantly weather my car could be so screwed up that it killed a car md.
the work that has been done on it up till now, I was out there helping my sons with it...
and I'm now a 60 year old disabled lady, but a less than two decades ago, i could have easily walked the distance into town..
but, that was then this is now, and now I need a car.
so I can go to the store and buy not only mine, but my sons food... with my money... so I can cook it... and buy the laundry detergent that I can use to wash their clothes, and the dish soap, so I can do the dishes...
do I really need to beg them to help me with the car?? gee, I don't know.... do they want to play taxi driver for me or would they rather do the grocery shopping themselves!! heck, they can pitch in and help pay for it also!!! and while they are at it, they can start paying their share of the rent on a more regular basis instead of me having to cover for one or more of them every month!!! then maybe, just maybe, I could stash a little money away and have enough to take my car to a shop and pay someone to fix it for me!!! and, I'd probably sleep a little better at night instead of waking up in a panic over weather we are gonna have enough food for the month!!!

Sorry your life is rough. I would fix your car for free if I was in your town.

posted on Sep, 20 2018 @ 11:21 PM
link
It's unfortunate all the extremist feminists have ruined it for everyone else. TBH, I don't think it was ever really meant to be this toxic.

All of this was completely meant to get this toxic and more.

The people themselves that think they started these movements are daft tools...always having their causes infiltrated and owned from beginnings.

The complete failure to see the symphonic hum of utter ignorance that all has been carefully planned, and human creativity entirely controlled and directed by scum, is more than I can stand....

Creation of a new reality is necessary...this one is far too bland and predictable..not stale..just the same as its programming insists.

Let me pay for that for you!

originally posted by: BrianFlanders
It's unfortunate all the extremist feminists have ruined it for everyone else. TBH, I don't think it was ever really meant to be this toxic.

Speak for yourself. Feminist still like men that don't whine all the time.

Seriously, it depends on the feminist. More and more i see a break from positive views on males from most self described feminists. Certainly not all, nor am I trying to paint a picture with a broad brush.
You and I are in the same industry. I work in higher education. You are on set. In 10 years (if not before) you will be seeing it too.

thanks, I'm sure everything will work out in the end, or I'll have a heart attack or something and won't have to worry about the crap anymore.

ya know the part about feeding the baby food to the baby instead of the cat bit in my first post...
lol... that actually is true, my friend was working and while she was working she thought her husband was feeding the baby like he was supposed to be. the doctor got concerned because the baby was losing so much weight when she should have been gaining. eventually the doctor reported her suspicions to child protection. and my friend almost lost the kids because of it. well... to make a long story short.... she figured out what he was doing and that was the end of the marriage. you can gripe about the "evil feminists" all you want, but that doesn't change the fact that the laws needed to be changed to protect the women and children from those kind of men out there !

Do i smell fear?
After reading many threads on ATS i'm totally with this lady! 'Wo gehobelt wird, fallen Späne', as we say in german.

posted on Sep, 21 2018 @ 04:57 AM
link
"Sorry. If some innocent men's reputations have to take a hit in the process of undoing the patriarchy, that is a price I am absolutely willing to pay."

Translation: "I am completely okay with innocent peoples' lives being ruined if it gets me what I want or believe is right."

How ironic for that person to admit to being fine with injustice to combat her perceived injustices.