Why should I be loyal to my country?

I love being British, it would be the best country in the world to live in if it was summer all year.
There is a British 'thing' with our people and it has # all to do with skin colour.
So glad I was born in Britain.

Lots of things wrong with this country, many of which need addressing as a matter of urgency.
But the good far, far outweighs the bad.

a reply to: intrepid

The Commonwealth opens a whole different discussion as well. I would consider loyalty to that before anything other than country.

Without a doubt, unreservedly.

There is a common tie that binds and we should resist any attempts to break them.

originally posted by: CornishCeltGuy
I'm biased though because I have family of a few generations in Canada

Do you have family from the Lake District? Mum's from there. We might be related.

posted on Sep, 15 2018 @ 10:10 AM
link
a reply to: intrepid
No, different neck of the woods to me.
My family are greasy workers in Ft Mc Murray, doing well n all but I wouldn't trade places with them.
EDIT
Canada, Australia, and NZ would get a hall pass from most UK people before any other countries though for sure.
It's in our blood.

Please, cry me a river!

The only people screwing over 'wealth creators' are successive governments who have consistently done absolutely nothing for small businesses at all.

I know many, many small business owners and the majority are very hard working and industrious people with a knack of making money.
Unfortunately governments continually try to shaft them up the proverbial.

Direct your anger at those who deserve it and not those who are only getting rewarded in such a way that we all should be.
Its not the workers faults, its the policy makers who deserve your ire.

And I still fail to see what any of that has to do with feeling a sense of loyalty to your countrymen and women.

originally posted by: CornishCeltGuy
a reply to: intrepid
No, different neck of the woods to me.
My family are greasy workers in Ft Mc Murray, doing well n all but I wouldn't trade places with them.

I live here and wouldn't. Do you know how cold it gets there?

posted on Sep, 15 2018 @ 10:18 AM
link
I've never been and I've never felt being part of it. Since I was a kid it was damn hard to make me abide any rules and laws so in the case of war I will probably happily take the gun and kill people in this country first then deal with other enemies later.

Lol yes!
I wouldn't do it no way!
I rarely see frost here, you can keep Canadian winters lol

Direct your anger at those who deserve it and not those who are only getting rewarded in such a way that we all should be.


And I still fail to see what any of that has to do with feeling a sense of loyalty to your countrymen and women.


Loyalty there for sure............ Plus loyalty to our Commonwealth cousains too. Just not to our leaders and on this I agree totally with OP Die Gloke who sees it the same.

posted on Sep, 15 2018 @ 10:30 AM
link
a reply to: ufoorbhunter
Come on mate, Britain is a fantastic country to be a citizen of.
Just check out all the folk camped in Calais, France, they all agree.
Be happy you were born here, could've been much worse.
EDIT
They won't even register in France because if they do under international law they will lose their right to register in Britain.
Britain is a good country in the international top ten, maybe it's just you can't see it?
edit on 15-9-2018 by CornishCeltGuy because: (no reason given)

Couple of things; government workers aren't 'wealth devourers', the majority are conscientious and hard working people who are only getting the kind of financial rewards and benefits that ALL working people should be getting.

Secondly, I think you'll find that many people are equally disillusioned.
So why don't people do something about it?

It aint fair pure and simple.

Guess what; life isn't fair - never has been and never will be.
That's why Generation Snowflake are going to get such a bloody shock when they realise just how unfair life is.
None of their mollycoddled sensitivities are going to do them any good then.

I despise our politicians, of all persuasions, with a passion....but that doesn't lessen my loyalty to the British people.

posted on Sep, 15 2018 @ 10:44 AM
link
a reply to: Freeborn
Yeh fight them on the beaches.
..and I'll back Caled and Muhammad from my local corner store if they join the fight.
Being British.

Britain is a fantastic place to live totally agree and do see it. Just do agree with the OP on loyalty to the government, something we as the average men in the street must be very very careful of. They have used us through this loyalty thing for the past hundreds of years and sent us off to be killed in our millions just so the City can persue its business tactics. Loyalty to the government has been the death for millions in various wars that were plain wrong.

Yeah loyalty to our people and our government are totally different things, but let keep it that way. Britain is a great place and like you say life aint fair at times but just by being born in Britain you are blessed by being in the fairest country on Planet earth and one that goes back a very long unchanged time. Maybe in ways like a thousandish years of continuity and that is something to be loyal to.

The main knock in loyalty perhaps came from experiencing contact from UFOs and following these events being left with a less patriotic view of Plant Earth and a more universal view of togetherness of all humanity in a Buddha sort of way where nationalism / patriotism / loyalty just fell away to be replaced by a ravE feeling of oneness with all of humanity. Being part of the whole if you will.

If it was summer all year round then Britain would be the best country in the world...lazy police policing ecstacy use would confirm it.


I'm not loyal to my country. 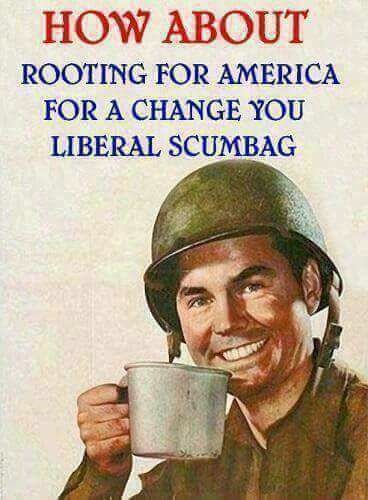 Did you really jump into a week old thread to cherry pick a single sentence out of a multi-paragraph post of mine in order to post the exact same meme you replied to me with in the other thread? Classy.

Also, I hope you realize this thread isn't in the Mud Pit, so calling people childish names won't fly. Or at least it shouldn't, per T&C.

As I mentioned in the other thread, I am not a member of either of the mainstream political parties, so calling me a Liberal Scumbag means nothing to me.

In this thread, I explain that it doesn't make sense to feel loyalty to a country. It doesn't mean I don't like it, I'm just not loyal.

Now, start a conversation with me using your words, rather than reposting the same meme calling me a scumbag.

originally posted by: narrator
a reply to: OneArmedBandit


As I mentioned in the other thread, I am not a member of either of the mainstream political parties, so calling me a Liberal Scumbag means nothing to me.


What are you? A commie?

Deflecting yet again. Do you really not have anything to say other than trying to make fun of me for disagreeing with your political ideals?

Care to address what I've already said in the posts you've responded to, or are you just going to continue to try to get a rise out of me instead of creating useful content?

posted on Sep, 20 2018 @ 12:56 PM
link
a reply to: narrator
Cannot even answer a simple question about being a communist or not and accuses me of deflecting.