Trump announces pulling out of Iran deal and imposing sanctions

originally posted by: enkilo
burdman30ott6
I wish you would travel the world a bit and see how much most people in the world actually loves America if not it's leadership. You will find that most people on earth do not wish you ill and would love to live in the USA. Just look at the success of your product such as fast food and entertainment as proof as most people think that the USA is the greatest place to live. The false narrative that the world generally hates you is used effectively by your leaders, more specifically the deep state so that you will put up with whatever evil they do to you as the most effective way to foment nationalism and patriotism is to pretend that the rest of the world hates you.

That is true, but extremist are still extremist anyway you look at it. I have been to about 70+ countries and all seven continents and people are great every where I go. This doesn't mean I would walk down the streets of Kabul anytime soon though. I would love to go to Iran, beautiful country, great foods and interesting people, but the extremist that took over after the fall of the Shah leaves a lot to be desired to want to go there. Right now it seems Trump is trying to end that evil as he sees it, NK as example, and most likely Iran will come to an agreement too. BTW who should Iran fear of being attacked from if they took an open friendly path? What country would invade them if they didn't speak the extremist rhetoric that they routinely say? Does any country in the Middle East have fear that Israel would invade them if Israel didn't fear first?

originally posted by: enkilo
a reply to: seekeR1963
In this case, the Hegelian dialectic means that both the democrats and republicans, despite appearing to be on opposite spectrum, at their very top serve the same masters. Which is why The Trumps and The Clintons were always friends and that is why Bill Clinton was George Bush Snr Protegee. Or why Killary is still free and will never serve a day in prison despite her numerous crimes


Well that post shows you don't know what the hegelian dialectic is. Look it up. We all learn things on ATS.

So I don't know what is going to happen.

What I do know is that is has been amusing watching everyone who does have a working crystal ball state what is going to happen. 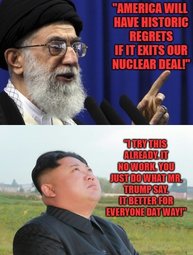 What I see is Trump undermining Obama's globalist policy of appeasement.

Syria, Libya, Yemen, Somalia, Sudan, Iraq, Iran - The Pentagon had a plan just after 9/11 to topple the governments of these 7 countries. (refer Gen. W. Clarke)

Now, 6 of those 7 have been hammered and/or had US military presence injected into it (there is a US military base in Sudan).

For the past 20 years the TVs have assured me that, and I quote, "Iran is merely months away from nuclear capabilities, something must be done to stop this regime", and always, we have the zionists in the background stoking the fires. Notice how when its ISIS, Israel is *crickets* but mention Iran and bibi has evidence and sleepless nights??

Oh, did I mention that the Pentagon (aka, the warpigs' central command) are the ones gunning for this - look how Trump is following the plan.

Clark is not an individual that I give much credence to. He's flip-flopped a few too many times. More like a politician than a General. He did like his 'air-time', though.

Having said that, It all comes down to Trump. Having bases goes a long way back. Terrorist inclined groups exist pretty much in all those African and ME nations. SOP, from what I can see. The list doesn't seem 'unreasonable' either. All of which have had extremists operating in them.

I cite Trump's speech to the fifty Muslim leaders he made. It looks that the Saudis have taken it to heart. I have heard Trump repeatedly he would end nuclear proliferation. I concur. Even if it means taking on Iran.( last resort).

There are a number of possibilities. Trump's game plan may overlap with TPTB in this instance. Might be rope-a-doping until the U.S. is stronger both militarily and economically. Both Russia and China have interests in Iran as well...

There's just too many places Iran is playing in the ME to take any chance on Iran nuking up. If that line in the sand is going to be reasserted- non-proliferation- then I can't think of two better places. NK and Iran. Risks? Sure!

Less risk than letting the ME follow Iran's lead in missiles and nukes. JMO, though.

I wont say this makes me support this decision.

But it gives me pause to condemn it.

I have a strong feeling Brennan was a globalist war monger, so if he is against this, it makes me wonder what s really going on.

originally posted by: enkilo
Plus I do not hate TRUMP. He is a useful idiot his Zionist masters are using to achieve their aim just like Obama was before him.

That has always been the single most ignorant statement that anyone could ever post..
You have to do better.
And I say that in the kindest of fashion.

posted on May, 8 2018 @ 08:05 PM
link
I pray that Trump didn't just want to tear this deal up.I am hoping he has some sort of treaty in mind that has to go through Congress.Hopefully there are backchannel negotiations going on now.That's a lot of hope though.

originally posted by: buckwhizzle
I pray that Trump didn't just want to tear this deal up.I am hoping he has some sort of treaty in mind that has to go through Congress.Hopefully there are backchannel negotiations going on now.That's a lot of hope though.

He moves fast. I'd bet he has a game plan. This is only an opening move with Iran. It seems to be only rhetoric until now.
Lot's of players to consider, China , Russia, Israel...

Because Obama was a moron. He claimed the money was to repay Iran's people for fighter planes they bought in seventies that were never delivered but that is plain wrong because that money belonged to the ruling family not regular Iranians so that money should have went to the family of the former shah of Iran's descendants.

The upside is those tax cuts should just about cover the cost of gas and heating fuel.

posted on May, 8 2018 @ 09:02 PM
link
Any shooting conflict near the strait should push the futures prices up quite a bit.

I don't think the US is the respected power it it once was.

I personally don't think he plays that well.