posted on Mar, 23 2018 @ 06:19 PM
link
Did a great cataclysm happen around 12800 Years ago and then 11600 years ago ? That changed our early world ( Humankind )
This video published a few days ago on You Tube from the 2017 contact in the dessert UFO Conference
is well worth the long watch/Listen ? 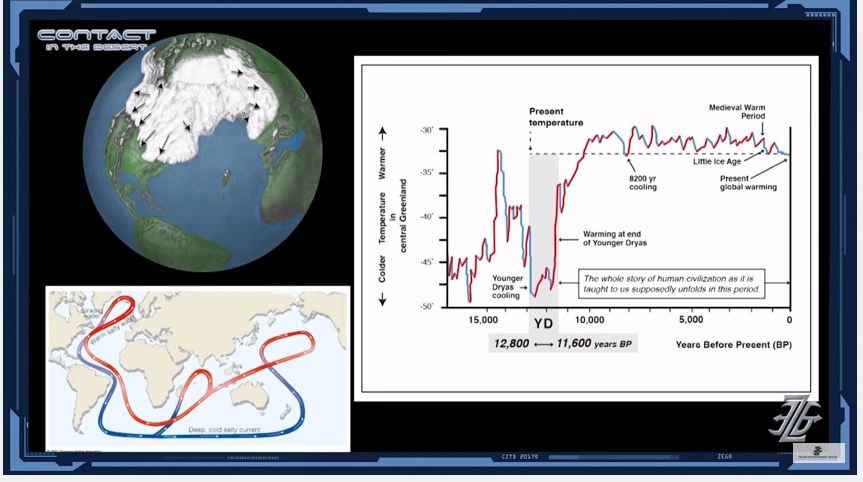 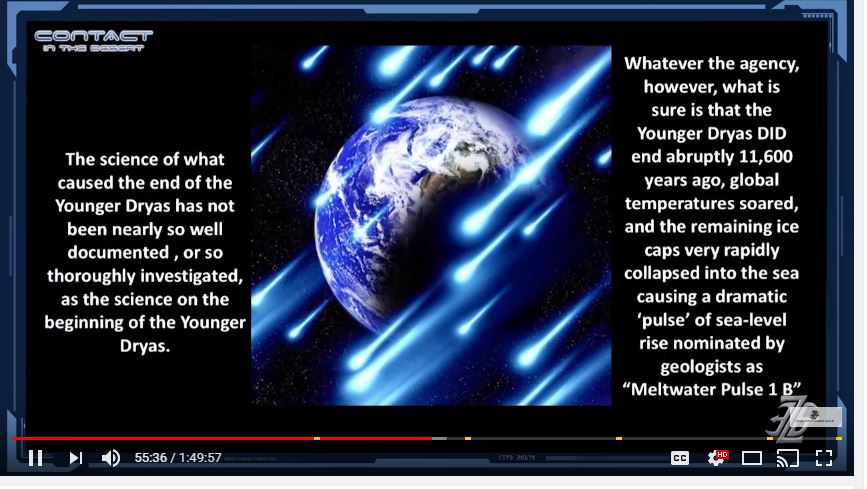 ooo, Hancock. I absolutely love his material, especially his trailblazing thoughts on the electric universe. He also has some very unique and original thoughts on mankind's history. Thank you very much for the link and heads up on this video. I would never disparage information, especially when it offers originality.


It's been a while, there are many threads about it, including a few I have done as someone else. I will hunt up all my data to share with you.

New evidence supports the idea that a huge space rock collided with our planet about 13,000 years ago and broke up in Earth's atmosphere, a new study suggests. This impact would have been powerful enough to melt the ground, and could have killed off many large mammals and humans. It may even have set off a period of unusual cold called the Younger Dryas that began at that time, researchers say. The idea that Earth experienced an asteroid or comet impact at the start of the Younger Dryas has been controversial, in part because there is no smoking-gun impact crater left behind as with other known events in our planet's past. But researchers say it's common for space rocks to disintegrate in the heat of a planet's atmosphere before they can reach the ground.

If a comet, which would have been traveling at about 30 miles per second, impacted Earth's atmosphere, it would have created a flash of extreme heat reaching about 3,000 to 4,000 degrees Fahrenheit (1,600 to 2,200 degrees Celsius). In addition to melting the ground, such temperatures would have proven cataclysmic to many kinds of life. At the same time that the impact may have taken place — 12,900 years ago — Earth was beginning a mini ice age. It is known that many large animals, such as the mammoth and the saber-toothed cat, did not survive this age. There's even evidence of a population decline in humans living in North America at the time, called the Clovis culture.

Good stuff. Thanks for posting.

I dig GH and Randal Carlson on this subject. The Holocene Working Group (?) has put together a pretty solid argument.

Probably there is lots of archaeological evidence worldwide which would greatly expand our current knowledge but it's all under water. Very interesting.

It was one of the most interesting books i've ever read. Very well written and sourced. A lot of what he talks about in this lecture is in the book.

It's hard to argue with the evidence he provides.

originally posted by: skywatcher44
Did a great cataclysm happen around 12800 Years ago and then 11600 years ago ? That changed our early world ( Humankind )
This video published a few days ago on You Tube from the 2017 contact in the dessert UFO Conference
is well worth the long watch/Listen ?

What we have here is an intermix of several different types of global civilization altering events.....problem is focus is on the ultra -rare ones when there is a CYCLICAL COMMON ONE which hits us every 3657 years...the one that causes Noahs Flood type impacts....there is evidence of the REPEATABILITY of this Global Continental Displacement Wave model which we experience every 3657 years......this is a critical point to consider.

posted on Mar, 24 2018 @ 12:24 PM
link
Love Graham Hancock! Easily my favorite author. ‘Magicians of the Gods’ was a groundbreaking book. His most interesting book was ‘Supernatural’ IMO. His next book is supposed to go to the publisher in June. This one is supposed to be honed straight in on North America exclusively.