posted on Mar, 4 2018 @ 03:29 PM
link
Sense all legal guns are semi-automatic then clearly democrats are far more dangerous and want all the power.

To be fair, can the common people really defend against the tanks, helicopters, and drones with modern weaponry that is available in a gun shop. Aside from the odd enthusiast with a .50 caliber rifle against the lighter equipment such as trucks, if the government really wanted to roll over the people, any odd pocket of resistance would easily be met with a drone strike.

I’m sure someone will point out that the military won’t be likely to follow an order to fire on civilians and I’d like to believe it’s as simple as that, but Kent State happened. So realistically there’s no knowing for sure.
edit on 3/4/2018 by eNumbra because: (no reason given)

So again. How is banning some stopping you from bearing arms?

If you read the history of how the UK lost their gun rights, you will see why many in the US are against any further gun bans. It was a gradual implementation of Firearm Act's over a period of decades and sold to the citizens as a means of crime prevention. In actuality it was a way for the government to gain and maintain control over it's citizens. It worked, UK citizens are now defenseless against their government and criminals. Most Americans don't like the idea of their constitutional rights being infringed upon and for a good reason.

This is the problem, some people are leaving out the part where President Trump said "in a case like this shooter it might be better to take the guns first." This murderer made many death threats, the police were called because of domestic violence perpetrated by this murderer to his mother, and also for making death threats to neighbors. That is different to "calls to disarm all Americans". I do disagree with a trend we are seeing. President Trump and other republicans are arguing that anyone deemed "mentally unstable" should be debarred of the second amendment. But he forgets that the left, and even several leftwing "famous" psychologists and psychiatrists have been claiming that President Trump, and conservatives in general are "mentally unstable" just for holding conservative values, and for not daring to kowtow to leftwing lunacy. The left have even been branding conservatives and people who lean to the right in politics as "a threat to society, progress and the future". Ironic how the left calls the right as "nazis" yet time and again it is the left who resort to the same tactics used by the nazis, and other leftwing dictatorships.

I do agree that when a person is truly insane has made death threats, is prone to violence etc, and not just a political opponent, then it might be necessary to stop that person from acquiring, or having access not only to firearms, but anything that person might use to commit murder. But, instead of just "taking away his/her firearms", why don't we put that person in a psychiatric ward? However, and as I have stated we have to make sure that those people are truly insane and not just "political opponents".

Psychiatrists under nazi Germany argued that anyone who dared have an opinion different to "national socialism" was "mentally unstable". Political opponents were thus labeled as "mentally ill", their rights were taken away and many political opponents who were not able to escape nazi Germany ended up dead or in the psychiatric ward until the day they died. Many were executed since "political opposition" was viewed as a mental illness that had to be destroyed, since in their view all sorts of mental illness made those people's genes defective.

These days the left are once again making similar arguments. Calling political opponents, people in the right, as mentally unstable and claiming that conservative values are a threat to progress and to society, which is of course false.

Thanks to the Obama administration the labeling of people in the right as being "mentally unstable", "extremists" and even "possible terrorists" became a trend that the left has once again picked up. Other leftwing dictatorships did the same thing such as the U.S.S.R., China, Cuba, etc, etc. It should be pretty obvious who the "fascists" really are. Fascism is a branch of socialism/the left, and the left are once again becoming fascists.

edit on 4-3-2018 by ElectricUniverse because: add and correct comment.

There is nothing in the constitution about having a standing military. And if one were to look at the writings of the founding fathers, one thing that many agreed on is that they did not want or trust a standing military. Their idea was that there would be a small military, who would guard what was needed to be, and in the event that the country was attacked, that it was the people who would make up the bulk. That a cry would go out and every able body man would gather their firearm and report to a location and then go off to fight, then return after that happened. In fact it was not until World War I, that the modern army was established.

And back then, weapons were pretty unified. The founding fathers were not able to predict about what all was going to happen in the future. To them the technical advantage was a cannon that was easy to move and was accurate.

But as it is a right, then there has to be limits. After all the rights in the First amendment, and those after have limits to them, so too the 2nd amendment.

originally posted by: neo96
After reading this article, and the Yougov poll. I am left wondering. Who is the bigger fascist? Trump said take the guns, and leave the cannoli so to speak.The Democrats want to ban ALL semi auto's. When it makes no distinction between rifle or pistol.

Hell, there is even a percentage that wants to repeal the second amendment entirely.


Overall Americans are at 55/33, with even Republicans at a surprisingly narrow 37/53 in opposition

Americans are strongly opposed overall but Democrats are on the fence at 44/46.


Democrats are also evenly split at 39/41 on, uh, whether to repeal the Second Amendment. 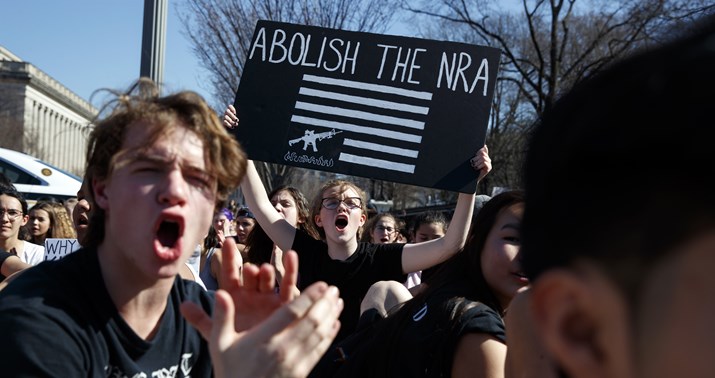 The democrats are the reason there are so many semiautomatic weapons out there.
people see the democrats wanting to ban guns and repeal the Second Amendment. The result many went out a bought more guns and guns with a lot of firepower like the AR.
if a complete ban on guns where they had to be turned in happened less then 10% would be turned in.

In Calif when the assault weapons ban went into law where you had to get a permit or turned in less then 30% got the permit and less the 1% turned theirs in.

To people that are preppers, rural, and ex-military have never trusted the democrats at all since the Vietnam war.

I was a electrician in the US navy and worked as a non union industrial electrician for many years in calif.

in 2009 i became unable to work as a electrician because i could not take the state license test.

Union electricians just go to the union hall and get a certified letter. this was a open payoff by the democrats to the unions.

posted on Mar, 4 2018 @ 08:06 PM
link
I really doubt the numbers. Polling self-described whosawatzitz in certain places whosawatzitz favor will yield predictable results. I highly doubt my state would poll in that direction, but I wouldn't use my state as a measuring stick for any other place.

posted on Mar, 4 2018 @ 10:01 PM
link
It hardly matters. Its a bloated idiot being rivaled by a mob of more screaming idiots. It's the blind leading the drunk.

If the left doesn't screw guns over, Trump will. Hell, he might not even mean to. I don't think he's a conspiring manipulator or anything - quite the contrary. He has no freaking clue what's going on around him, and he's just winging this entire presidency.

The media bloats and exploits tragedies, and suddenly heartbreak for children victims blinds everyone. Logic leaves the building, and people latch onto the first solution presented to them on a silver platter; gun control.

We're all the problem. We get so protective, either of our children or our rights, that we fight blindly and no compromises are made. Divide & conquer, workin' like a charm. The idiots in charge are no better. When our role models are idiots, their followers might as well have been swallowed at birth - because they didn't stand a chance.

But yeah... in short, both. Both of them suck, and so does this whole damn situation.


I think you're the bigger fascist, maybe they should ban you and America would be great again!!