originally posted by: swanne
a reply to: neo96

Mussolini is the bigger fascist.


Fascist lovers always blame someone else.
Just look at Obama. And it is very obvious that the Democrats as a whole are the far greater fascists BY FAR. The Nazi party in old Germany used the same tactics.
edit on 2-3-2018 by NoCorruptionAllowed because: (no reason given)


originally posted by: 3NL1GHT3N3D1
a reply to: notsure1

The same way Trump would run into that school without a gun and capture/kill the shooter with his bare hands.

The biggest threat to a free state is not foreigners its the cops and the national guard and the government.

Hitler pulled the first documented false flag in history right before WWII so he could declare marshall law and disarm his populace. And we all know what happened after that right?

Now we have a Potus that all you guys have been calling HITLER and making comparison after comparison to HITLER actually saying he wants to take the guns before due process ....

AND YOU GUYS WANT TO LET HIM. PLEASE LET THAT SINK IN...


Us "Trump haters," aren't responsible for electing him as POTUS.

Actually, Trump haters are the direct reason he was elected. They vocalized their hatred of America and all that is good by supporting Hillary, and so... You know the rest from there. 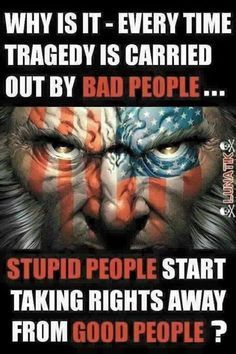 Some say healthcare is an inalienable right, does that mean only for natural remedies then? Just about the time to plant a garden, so it's a good time for people to receive this news.


It is not an inalienable right no matter how many times you say otherwise.

Read the Declaration of Independence.

You know, don't you, that the Declaration of Independence doesn't say a thing about guns.

It says in part:


When in the course of human events it becomes necessary for one people to dissolve the political bands which have connected them with another and to assume among the powers of the earth, the separate and equal station to which the Laws of Nature and of Nature's God entitle them, a decent respect to the opinions of mankind requires that they should declare the causes which impel them to the separation.

We hold these truths to be self-evident, that all men are created equal, that they are endowed by their Creator with certain unalienable Rights, that among these are Life, Liberty and the pursuit of Happiness. That to secure these rights, Governments are instituted among Men, deriving their just powers from the consent of the governed

...and then goes on to talk about the reasons why the United States shouldn't be a part of England's empire. Guns are not mentioned as an inalienable right. You can read it here (or many other places)

Well, it sure says this.


When in the course of human events it becomes necessary for one people to dissolve the political bands which have connected them with another and to assume among the powers of the earth,the separate and equal station to which the Laws of Nature and of Nature's God entitle them, a decent respect to the opinions of mankind requires that they should declare the causes which impel them to the separation.

originally posted by: DBCowboy
Because A) Leftists DO want to eliminate freedoms, and B) Trump uses it as a negotiating process. If I lost my sh#t every time Trump said something, I'd have nary a sh#t left.

They have a decades-long history of wanting to eliminate freedoms.

...like the freedom for only Caucasian land owners to vote? Yes, we took that away and allowed women and minorities and men who didn't own land to vote.

We also took away the freedom to enslave other humans (which was allowed in the Constitution.)

We took away the right of a single religion to dominate the country.


...like the freedom for only Caucasian land owners to vote? Yes, we took that away and allowed women and minorities and men who didn't own land to vote

I wonder why the sins of the past are repeated then.

Second class citizens. Those not allowed to practice their RIGHT.

Which gun control does.

We hold these truths to be self-evident, that all men are created equal, that they are endowed by their Creator with certain unalienable Rights, that among these are Life, Liberty and the pursuit of Happiness.

The right to self-defense isn't one of them.

ALL MEN are created equal.

Says everyone there don't it?

The 14th amendment said no state shall make or enforce any law that abridges........

And ended with nor deny ANY person equal protection under the law.

Gun control is institutionalized discrimination clearly dictating some people are more equal than others.
edit on 2-3-2018 by neo96 because: (no reason given)

Trump isn't a fascist .. he is completely right in using his rights, to demonstrate against the fascism that has taken it's hold amongst us. And use his freedom of speech ...

The problem is, he's not an underdog ... and isn't likely to upheave us underdogs in the world.

So you claim leftists wrote the Constitution and Bill of Rights?

They preserved the right to boom sticks.

Them and their gun culture!

The bane of despots existence.

I'll tell you something ... have you ever taken a good look at those dudes, that makes "weapons" for the military, as an example? Or the people who fill the category of "security"?

Calling them "retarded", makes retards look bad ... and that isn't an understatement.

You trust these "morons"? You are a bigger moron yourself ... the world has been ablaze, and the entire middle east is in ruins ... because people like "Crazy" George Bush, a man who could hardly speak properly ... let alone form a proper sentence, was in the presidential seat of the US of A.

Our whole current system is fascist.

There is no point in arguing over who is more fascist than the other fascists. Republicans, Democrats, whatever - o - ists.

Capitalism has succumbed to fascism ... it is a done deal

IT will not change now until after a collapse ... which is the only thing that can maybe change it.

The problem is that a collapse will likely bring us into something worse ... like a dictatorship that calls itself 'socialist' or 'communist', but really is just a totalitarian dictatorship.

Capitalism would be nice to have, but I have not seen it in my life here in the USA. We lost capitalism when the gold standard, and Constitutional money, were lost.

Maybe my grandkids can experience capitalism and freedom, but I think it won't happen during what is left of my own lifetime. Bummer - that.

originally posted by: TinySickTears
a reply to: swanne

I don't see how banning certain guns means people can't own guns anymore.
Makes no sense to me.


Because banning certain guns won't stop mass shootings, it will just create a new set of guns to ban. And so on, and so on.

Things can, do, and should change to keep up with the world we live in.

Hence the Amendment process, not Legislative.

We live in a completely different society than back then. Millions more people. Tons of other cultures. Far different weapons than those days and far fewer militias.

Culture, population, society and timeline are irrelevant to the discussion.


Who abuses/wants to change the Constitution and Bill of Rights?

Yes, awful dirt bags, wanting children to be able for go to school and not be slaughtered. How dare they infringe the freedoms of angry young white men to take up assault weapons and commit mass murder. These anti freedom scum, these people wanting to stop school shootings are just the worst. They're like actual nazis. The nazis didn't let people shoot up schools either.
edit on -06:00am27331America/ChicagoSat, 03 Mar 2018 03:27:10 -060061 by Painterz because: (no reason given)

originally posted by: TinySickTears
Does the right to bear arms say any and all types?
Let's just say a certain type of gun was taken away.
Plenty of others so people could still bear arms.

It's an honest question.

Does it mean any and all types?


Yes. Shall not be infringed. Also, currently, if one took the proper steps, one could own any weapon short of a nuclear bomb. So yes, all types.

It means what it says. Military deployable weapons. If the armed services get Phazers, then the irregular militia, which are the able bodied, non criminal, Americans, get phazers and have to be trained up to use them effectively.