posted on Jan, 7 2018 @ 01:35 PM
link
Continued....."and flying saucers, which must be taken into consideration when discussing this particular subject and must be looked upon with great scrutiny and skepticism. During the time span of the Reagan Administration, the president gave six speeches addressing the possible extra-terrestrial threat, Ronald Reagan insisted on including this hypothesis in his speeches, against the advice of his speech writers. This suggestion comes from America’s highest office, replanting the seed of suggestion in the minds of the American and the peoples of the world.
www.youtube.com...

After WW2, during the aftermath of the Jewish holocaust, world leaders set-out the proposal for a world government and suggested it would prevent future genocide and world war; by forming the Treaty of United Nations in 1945,

The sightings of UFOs and flying saucers came about as early as 1942, However, later that year reports then came from members of Military intelligence involved in the incident named Battle for Los Angeles, in the United States where.


First sightings were seen by allied pilots over the skies of Europe and the Pacific, toward the end of WW2, with reports late on into the war, first in November of 1944. These were noted by the pilots as ‘foo fighters’, and sightings in the Pacific continued until the last few days of the war.

The announcement by Kenneth Arnold in 1947, a pilot and ex-intelligence officer further launched the deception, since that time everyone who has ever been connected with UFOs was or is a member of a branch in the US intelligence community. 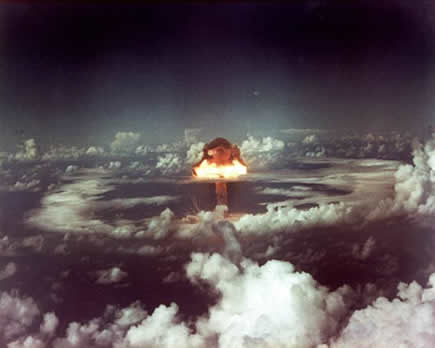 Project Galileo was an unmanned spacecraft that was launched to Jupiter in 1989, to take photos of its moons. In the Book of Revelation 22:5 it says when the prophecy comes to pass, the moon will disappear from the heavens and there will no longer be any night. Jupiter is a planet made up of different gasses, heavy hydrogen, helium and other trace gasses. It’s interesting to note that the exact same proportions of these gasses exist in our solar systems sun. As any astronomer will tell you Jupiter is a baby star that’s never ignited. The future plan is to crash the spacecraft Galileo into Jupiter,

with the intent of possibly igniting Jupiter, turning our solar system into a binary one.www.spaceref.com...
I know this claim is going to stretch the imagination, but this is what the evidence points to. NASA even confirmed that they are still going to terminate the spacecraft into Jupiter after the mission. Why was the Galileo spacecraft was carrying 49.7 pounds of weaponised grade plutonium, NASA claim the plutonium is used to power the batteries of the spacecraft, if that was true the spacecraft would have only lasted until December 1999, then it would have plummeted into the dense core of Jupiter’s atmosphere, not even finishing the mission. On-board the Galileo spacecraft, a set of 144 plutonium-238 fuel pellet canisters, Radioisotope Thermoelectric Generators or ‘RTGs’ are wired into the electrical power supply and arrayed, in such a way were one ‘RTGs’ is laid next to another, with a vacuum in-between. That is the exact configuration of an atomic bomb. Plutonium is what they use for atomic explosions. Engineer Jacco van der Worp has reinforced the claim stating the plutonium on board will implode, ultimately collapsing in on its self-due to the massive pressure from Jupiter’s atmosphere and resulting in a fiery explosion. We know weaponized plutonium has a half-life of over 20.000 years.

I believe this will get rid of the earth’s future cycles of Ice Ages. Does this sound awfully familiar to the film by Stanley Kubrick? Well, Arthur C. Clarke was a scientist and a member of the British Interplanetary Society, he’s also a fraternal member of the ‘secret brotherhood’. It was his fictional sci-fi book 2001: a Space Odyssey & 2010: Odyssey Two that inspired Kubrick to make film adaptations. I will go into the occult symology behind Kubrick’s 2001 later on in the book. In Arthur C. Clarke books he says its Aliens, it’s not aliens guys believe me. They claim “We are only going to plunge Galileo into the centre of Jupiter to make sure we don’t contaminate Jupiter’s third Galilean moon Io and fourth moon, Europa” www.enterprisemission.com...

Those in the New Age movement, spread the view that the earth’s oceans will rise and the polar ice caps will melt, which will probably happen but those who see it coming will head to high ground. A study was conducted by a secret group of scholars called JASON. Americas top researchers, scientists, Nobel Peace Prize winners and philanthropists, all met up with world’s leading scientists in Huntsville, Alabama in 1957. While at this meeting, their advisers predicted that the world’s population would almost double, from just under 3 Billion in 1957 to 5.36 Billion in 1991, they predicted the greenhouse effect would lead to another Ice Age. An Ice Age will destroy civilization,don’t we hear that the planet is getting warmer every year? This bs comes from the New Age movement. It is recorded twice in the book of revelation of the New Testament in Chapters 21:25 and 22:5, that there will be no night.

posted on Jan, 7 2018 @ 01:36 PM
link
This should be a reply into your first thread. People will not be able to follow your thoughts through various different threads. Interesting topic however.

originally posted by: CHickMagNet5000
Continued....."and flying saucers, which must be taken into consideration when discussing this particular subject and must be looked upon with great scrutiny and skepticism.[snipped]

"There are no Aliens"
edit on 1.7.2018 by Kandinsky because: snipped excessive quote

BINGO!
just this fact makes the entire presentation hard to believe to me

posted on Jan, 7 2018 @ 02:06 PM
link
Do you know what the measurements are distance and size wise from Earth to Jupiter? If it were to become a sun, I wonder if it is at the right distance as not to melt us.