posted on Dec, 2 2017 @ 05:21 AM
link
No real conspiracy here, just a rather baffling tweet by Elon Musk announcing that the first payload to launch aboard the Falcon Heavy Rocket next month will be this: 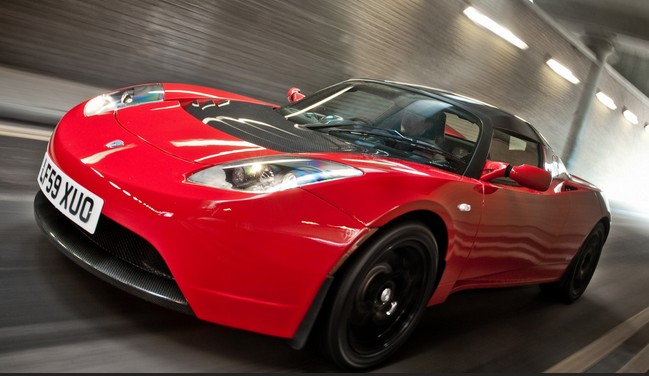 And the destination is: 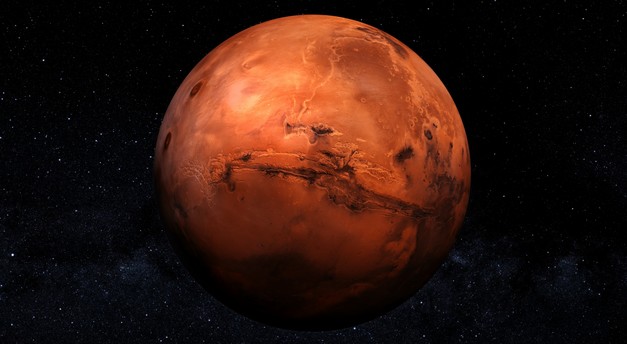 It's supposed to get there using the SpaceX "Falcon Heavy" launch vehicle: 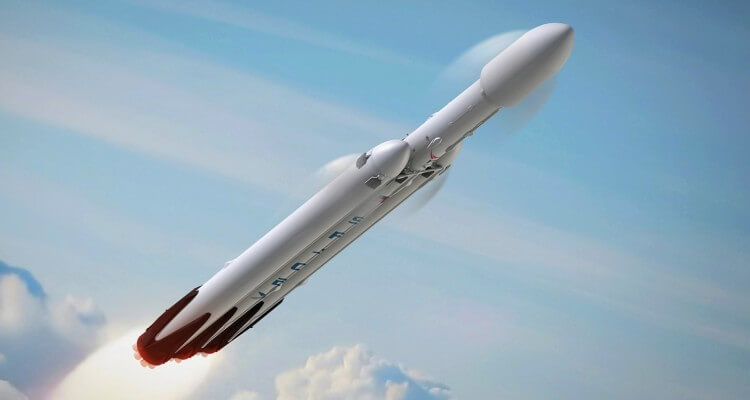 Oh yes and during the journey to Mars the stereo inside the roadster will be playing David Bowie’s Space Oddity. I had to rub my eyes and re-read everything but Elon Musk seems to be serious about it. 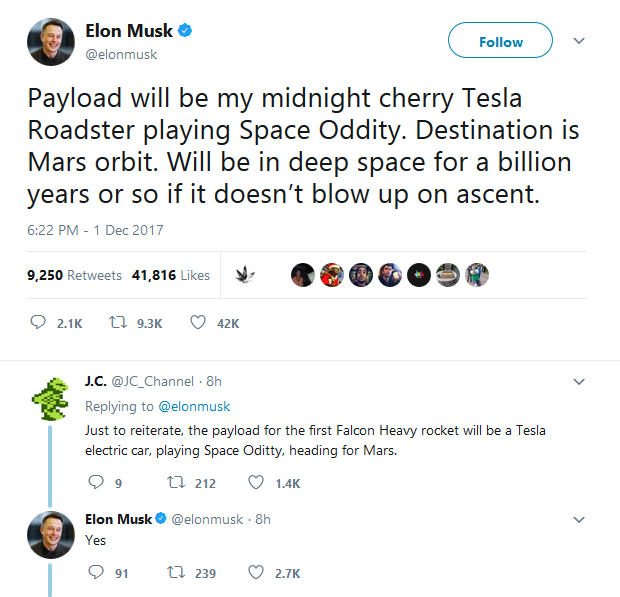 Elon Musk to Launch His Own Tesla Car Into Space

Musk, who has previously stated he wanted to put “the silliest thing we can imagine” on board the Falcon Heavy’s maiden voyage, said the car would be playing David Bowie’s 1969 hit Space Oddity at launch. Space X plan to send the ship into orbit around Mars and Musk suggested his Tesla could be floating in deep space for “a billion years” if the experimental rocket does not explode.

"Falcon Heavy to launch next month from Apollo 11 pad at the Cape," he tweeted. "Guaranteed to be exciting, one way or another."


I'm not really sure what to think of this, but it's definitely an unusual way to advertise the Tesla Roadster!

posted on Dec, 2 2017 @ 06:03 AM
link
Well, when aliens dig out our solar system, at the very least, an all electric vehicle would indicate a species capable of conforming to the natural order of their homeworld in a way that doesn't pollute.

posted on Dec, 2 2017 @ 06:21 AM
link
I really like the way he thinks. Demonstrate the capacity to deliver a heavy payload to mars and # around like a teenager, at the same time.


Of course then there is this...

The aliens will think it's part of our mythology/religion to orbit planets playing Bowie music.
edit on 2-12-2017 by Reverbs because: (no reason given)


They feed bodies to hogs for free.

Of course its a military payload.

Considering battery manufacturing, lithium mining, disposal and the fuel burn to charge it in the first place?

VS co2 aka plant food

Arnie, when those roadsters are all powered exclusively from solar, involving no grid attachment to a power plant which may be burning coal or other fossil products, that may well be true...

Of course, just finding the car would not allow a future space archeologist to understand the difference.

posted on Dec, 2 2017 @ 11:09 AM
link
Bloody Brilliant publicity stunt.. Because that is exactly what this is, just another publicity stunt and free advertising..
edit on 2/12/17 by Misterlondon because: (no reason given)

posted on Dec, 2 2017 @ 11:29 AM
link
It is a brilliant publicity stunt and demonstration of capability.

I am curious about "Destination: Mars Orbit." The car would require an attached rocket to put in orbit around Mars, otherwise the best he can do is a fly-by. In that case, the Tesla would be in a solar orbit near the orbit of Mars.

Yes. Electric is cleaner. Output of toxins as a measuring stick of course, combustion engines poop out carbon monoxide. Plants no likey, and people have permanent sleepy.

posted on Dec, 2 2017 @ 01:25 PM
link
Just what we need, more space junk floating around. Really practical, rolls eyes. That car would be better put to use driving around down here like parked in my garage.

posted on Dec, 2 2017 @ 01:43 PM
link
I'll bet those guys sitting in the Gale crater " That facility on google maps remember that story?" are hoping it sees descending through the atmosphere of Mars " keep your thumbs crossed out there

posted on Dec, 2 2017 @ 01:56 PM
link
It makes sense. SpaceX needs to demonstrate that Falcon Heavy is a viable platform. No one will commit to placing a multi-million dollar satellite on it for the sake of an experiment, especially with Musk's own campaign of diminished expectations as he has frequently suggested the chances of success on this launch are small. So why not get something out of this launch? It's a 'publicity stunt' of necessity. It puts the spotlight on SpaceX, increases interest in what he is doing. If he manages to pull off this launch AND recover the boosters, the launch will be considered a wild success and SpaceX will have made history. If any troglodytes have a problem with that they should crawl back into their caves and sulk.


I wish I could afford to be that funny

posted on Dec, 2 2017 @ 03:02 PM
link
All that aside, why can't some college teams provide a proposal for a cheap science instrument. You would think somebody could propose something to put in the payload. Even in the payload, there should be some way to do some science. Or is it really that expensive?

Just thinking in terms of not wasting any space/time. BUT I do appreciate the marketing potential and also what Schyler Schuyler says above about it needing to be a cheap payload.
edit on 12/2/2017 by jonnywhite because: (no reason given)

How falcon heavy is it ?


Maybe Elon could send the entire Congress (House and Senate) to Mars. Solves two problems in one shot. And the science experiment could be,
can things from the 'Swamp' live on Mars. Works for me and he doesn't have to lose that beautiful car either...