is this going to turn into mountains of madness !

cities under ice , with radiation

hahah forgot to reply ages ago

Are you american , then your worst fears are true, you are all being surrveiled and are all on lists of some description

The Earths magnetic field conjugate point in the Southern Hemisphere is at a geographic latitude of 74 degrees south.
The cold war ionosphere monitoring from before the bay of pigs incident is responsible for many of the conspiracy tales.
Some of the first ionospheric research applications were NAZI submarine communications and ship tracking.
Pretty easy to find the old Pegasus field runway with google Earth.
The tail of the C-121 Lockheed Constellation sticks up out of the snow like Neptunes fork.
That plane was Lockheed technology introduced March 14, 1947.
Good place to learn some history that has been declassified and isn't query monitored.

The high altitude and low humidity of Antarctica "were" useful for installations that were too heavy to be space based.
These days that is likely not an issue, but I haven't checked the latest no fly bandwidth restrictions as those are almost always posted in honey pot sites.

For a moment there, an advance civilizations remnant city beneath the ice.

Almost like the sailors of old, who first saw the artic ice, could only imagine the beautiful ice structures and looked eerily like a frozen cities.

cool thanks for those cold war details

what do you mean about the kennedy memo 65. 2
in relevance to the heat shield

They used nickel shielding on electronic devices back in the 1950's and early 60's to reduce unintended emissions from electronic equipment. Not sure why McNamara was teasing Kennedy about it. I think they were talking about Polaris missiles not Polaris controllers back then, but know one could find the tape and link it so who knows?

I'm still looking for kosher hardware for a friends Windows 10 build.
He didn't need a fancy audio codec so I set him up on an Asus Z-170K motherboard.
A little concerned about what XMP is going to do with the memory.

The Samsung Magician benchmark software tortures the solid state drive for over a minute till the thermal throttling sends the controller out for a beer to cool down. That means you lose your memory bandwidth and the signal probably has to ferment in a wait state somewhere increasing the chance of degradation instead of coming straight on home to be processed.

The voltage eye height of the contemporary DIMMs isn't too bad and the phase angle is pretty tight. 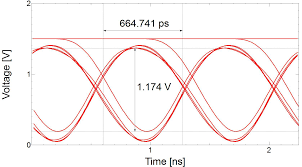 I'm seeing a jittery Vcore reading in HWMonitor but no idea how or where that is sampled.

Not sure if anyone else is interested in shared memory channels as a UFO phenomena?

posted on Dec, 3 2019 @ 06:32 AM
link
Bang on about Hapggood…. I call the events which are spaced 3657 years apart Cyclical Continental Displacement Wave Events.

NO it doesn't show any part of Antarctica. Not one island chain. Nada. Nothing. Zip. If you actually looked at the Piri reis map and the coastline of South America you'd realise that while he was constructing his mappa mundi from the 20 or so maps he used as a reference, Piri Reis was running out of room on his gazelle hide and had to turn it 90 degrees to carry on the coastline as far as Patagonia at best. Yes, it IS that mundane. He was running out of room, and that map is just a portion of a lost larger creation gifted to the Sultan at the time. You'll also see the islands of Cipanga located in the caribbean which on medieval maps which is now recognised as Japan. The quote from Ohlmeyer is always taken out of context as he and his colleagues also said that it looked like Antarctica according to the Mercator projection which elongates the coastline of the Antarctic continent.

And you are mistaken it WAS Hapgood who in his book Map Of The Ancient Sea Kings first posited this ridiculous theory with his forced and unnecessarily complex mathematical equations. Hancock and Von Daniken merely repeated it and David Wilcock has taken it and run for the posts. Antarctica has not been ice free to that extent for multiple thousands of years. And if you look at the 18th Century Buache map, you'll notice that Antarctica - which may have been charted by explorers at that point who thought it was part of Australia - is upside down, the peninsula pointing towards Tasmania and Victoria on the south Australia coast rather than stretching up in the approximate area of Tierra Del Fuego and Magellan Strait. It's not hard to work it out y'know.

originally posted by: sapien82
a reply to: Slichter


Plenty of info out there but unfortunately admiral byrds "diaries" are fake from a v bad sci fi script.
Google is your friend.
Same with ww2 sas v nazi yeti type stuff.