Antifa - are they true anti-fascist, Fascist or Lemmings?

Opinions are like butt holes. Every bodies got one.
I'm so sure you're a regular contributor right?

Opinions are like butt holes. Every bodies got one.
I'm so sure you're a regular contributor right?


Well you can't seem to quote anything from wiki or anywhere else that proves your point.

Love ya man and I gave you a star.

the USA is a nation of constitutional and well as local Laws, one of which is the ability for lawful free assembly, which doesn't need a permit if it is less than fifteen persons. The issue here is local authority like cities, counties, states and federal governments need to know they can protect you, their citizens, in a free assembly that is larger than 15 people, hence the issuance of a permit to gather in a location under the jurisdiction of one of these governing authorities.

The fact is fourteen angry violent people already constitutes an UNLAWFULL FREE ASSEMBLY which is not a constitutional right thereby can be squashed by a policing force. A permitted group has signed a application which states they will be lawful when they get it and they also estimate the size of the gathering.

An example of Charlottsville Virginia was only one group had a lawful permit and had agree to abide by the law. Then an unlawful permitted group came to counter but there mingled into their group were black dressed (like ISIS) with masked faces who sported weapons with intent to cause violence. The problem was the governing authority did nothing to protect the people who had a lawful permit from those who did not. And if fact the policing force was told to stand down and because of that violence between the two groups broke out. And it is now confirmed through many videos recorded that fateful day the so called black cloaked Antifa did in fact throw the first punch by spraying some sort of irritant into the permitted group.

Once the mayhem ignited the frenzied crowd like sharks to bloodied waters, commenced to violent acts themselves following like lemmings to the destruction of that which is supported in the constitution. Freedom of speech, freedom of lawful assembly and freedom to believe what one wants without fear of reprisal.

So in the end Antifa only wants the destruction of our Bill of Rights, the Constitution and of the free American way of life.

All while using fascist tactics to silence opposition to their view.

In my whole life I never thought of America as a white nation. That is BS. America is a melting pot from all nations of all creeds and colors and it is its foundational principles laid out in the constitution and the bill of rights.

I am all for non racism but even racist have rights according to the bill of rights and local laws of assembly. They have no right to become violent.

Those who oppose their view and violently attack them at a permitted assembly are there to cause them to violate their agreement with local authority and get them ejected from their place of assembly.

I have yet to find in the Bill of rights that we have the right to shut down the free lawful assembly, that is what Antifa does. They deny people of the freedom of speech, deny them their right to lawful assembly (that means peaceful assembly), It violates their freedom of Belief.

Don't think that which is base is of least importance. If you butt hole doesn't work you die.

To answer an earlier post to someone, while the DNC and Hillary are not connected in any way that is seen, I am most sure that the people who claim Antifa when they assemble to deny rights of others, they vote Democratic giving votes to Hillary or wrote in Bernie Saunders.


fascist tactics to silence opposition to their view.


By fascist tactics, I'm assuming you mean breaking up meetings.

In my whole life I never thought of America as a white nation. That is BS. America is a melting pot from all nations of all creeds and colors and it is its foundational principles laid out in the constitution and the bill of rights.


It took a long time after the bill of rights was adopted for citizen rights to be universal. Even Native Americans (Indians) weren't recognized as citizens until 1924.


BE IT ENACTED by the Senate and house of Representatives of the United States of America in Congress assembled, That all non citizen Indians born within the territorial limits of the United States be, and they are hereby, declared to be citizens of the United States: Provided That the granting of such citizenship shall not in any manner impair or otherwise affect the right of any Indian to tribal or other property."


I have yet to find in the Bill of rights that we have the right to shut down the free lawful assembly, that is what Antifa does. They deny people of the freedom of speech, deny them their right to lawful assembly (that means peaceful assembly), It violates their freedom of Belief.


So if a rally gets shut down then the racists are no longer racist (freedom of belief gone).

Some White Nationalist websites have been taken down. Are the owners of the hosting sites violating their rights too? Or do the hosting site owners have the right to not host racism?
edit on 6-9-2017 by pthena because: (no reason given)

Antifa does believe they are standing for the people.

If they ever govern you will know exactly how fascist they really are.

The racist were not being violent until they were attacked, they were provoked.

The Antifa and counter protesters did not have a permit and they were in violation of city statutes and ordinations of needing a permit for a gathering of over 15 people. I could not have a family reunion of over 15 people without a permit in a city park there in Charlottesville VA. We had over 100 relatives from all over the country going back into four previous generations it was closer to 300 who showed up. Police were there to make sure everything stayed calm. The only problems were created by those who came tot he park area which we had permits to use. They were the trouble makers. They tore down our banners and were arrested for doing so. We even tried to get the police to just let them go but they said they couldn't because they broke the law. We never showed up at court and they wee let off free.

We didn't see that at the park a few weeks ago, the police did nothing until it got out of hand. 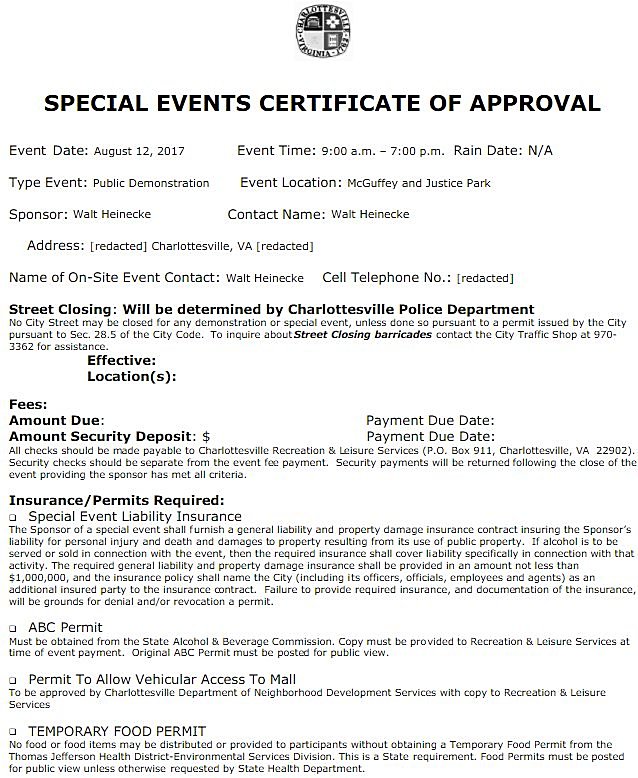 Donald Trump wrong that Charlottesville counter-protesters didn't have a permit
edit on 6-9-2017 by pthena because: (no reason given)

This is totally faked it is a online application printed with an notice of approval on it. It has redacted put into the address line, totally a lie. You will notice many unmarked points especially the Insurance/Permits Required - special event liability insurance. There are fees and other requirements this is totally faked. There is no city clerks office seal or signature. This is the only a partial online application some one doctored not a permit at all. Who you all trying to kid! Even the official header on the cities paper is not just a seal very close to the top with no signature s at the bottom. Totally faked!!!

I dont think they are fascist...authoritarian definitely.

Definition of fascism
1
often capitalized : a political philosophy, movement, or regime (such as that of the Fascisti) that exalts nation and often race above the individual and that stands for a centralized autocratic government headed by a dictatorial leader, severe economic and social regimentation, and forcible suppression of opposition
2
: a tendency toward or actual exercise of strong autocratic or dictatorial control

Anti
Freedom
Assholes
edit on 8-9-2017 by DBCowboy because: (no reason given)

the more they claim no central organization the more it reveals itself. The only random numbers are the Lemmings that help bring on destruction.

Yvonne Felarca, 47, who has been identified as the leader of the Antifa group By All Means Necessary