posted on Aug, 12 2017 @ 04:47 PM
link
Does everyone remember the NK propaganda video showing Americans "surviving" be only eating snow because we are too poor and weak for anything better?? It was a few years back and laughable is an understatement.

Now think of all the stuff we hear about NK from our leaders. They are weak, starved and incapable of real danger...sound familiar??

What is the chance that our "news" about NK is as bogus as theirs about the US?

If it is, how bad could this possible war end up if we underestimate their capabilities??

Just some thoughts around the recent crap going on.

I remember hearing about that, but never saw the footage. I've thought about this as well, for all we know, this is all being set up for Bush's nwo scenario. It's a dangerous game they're playing.

The Japanese are taking this seriously enough to prepare for nuclear attack.
Better safe than sorry.

This was a big thing I noticed this morning as well. Japan put their forces on alert so it's big enough for them to take action.

Similar thoughts have been bouncing around in my head lately as well. There's been an awful lot of effort put in to make Kim sound like a fat, lazy, little tyrant who bumbles around incompetently and is someone to mock and ridicule, but sad and even laughable with regard to any potential threat. The truth is, we simply go by what we are told, and that is all we have to go by.

I remember the video, it was hilarious.
The problem with your theory is, the NK government does not let their citizens have any access to information about basically anything from outside their country.
They are fed only the information that Kim wants them to see. And I believe that the Kim family has drilled it into the heads of regular citizens of NK, that the evil USA is causing the plight they are suffering.
While on the other hand, there have been many countries other than the US that have documented the plight of the NK people.

I think North Korea has been underestimated by the current US administration but they have underestimated their resolve not their power , the President thought he could intimidate them by sending a carrier group and making threats against them but as anyone who has watched the North over the years knows that just makes them stronger.

North Korea has limited power partly due to the sanctions levied against them and even though they're working toward Nuclear capability achieving that and using it are two different things , like all regimes of its kind it wants survival and launching an unprovoked attack on a neighbor or other enemy will be the end for them.

I don't think there will be a war but brinkmanship can lead to unforeseen outcomes , cool heads are needed at this time not bluster.

As mentioned: The people of NK are quite limited in what they are allowed to know about the outside world. They have no access to the actual internet, satellite TV, etc. Travel out of country is very restricted.

They must have one hell of a electrical conservation program too: 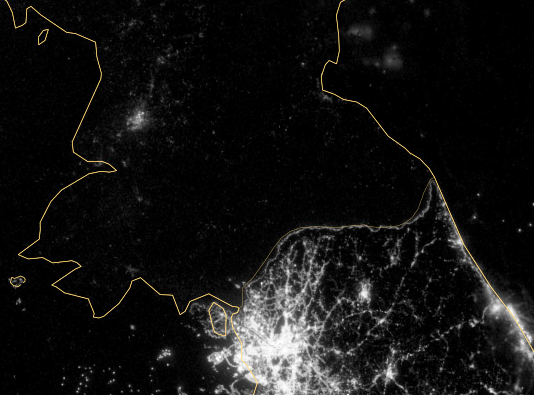 For the rest of us (the world) we are outside looking in. All sorts of countries know about conditions in NK, not just the US, so it would have to be propaganda on a world scale, something I just don't see happening.

Yes they have sanctions but how do we really know their capabilities??

I do remember seeing a few documentaries about how their people live. Small homes/apartments. Empty refrigerators. Strict daily activities etc.

They all seemed to show the same thing but what if, on the off chance, it IS propaganda?

I understand it is not likely that all the docs are set up but if they are and we have indeed extremely underestimated their abilities...then what??

What if they have kept the real ability of their military out of site and can truly destroy or at least disable part of Americas military in a way that we never planned for?

posted on Aug, 12 2017 @ 05:34 PM
link
There are tons of defectors and escapees who talk about the living conditions in North Korea. It actually is bad there. There are reports of people catching and eating live frogs and snakes, and even cannibalism taking place.

Because we spy on them using satellites , communication intercepts and other methods of surveillance , we knew they were preparing for a nuclear test to mark the birth of the country’s founder , Kim Il-sung because we were watching from orbit but significantly that didn't happen , it seems Kim Jong-Un wasn't prepared to push his luck that far.

posted on Aug, 12 2017 @ 05:48 PM
link
a reply to: tigertatzen
In the documentaries, it looks as though only Great Leaders picture is allowed on even the walls of private homes.
My view changed greatly after watching some of these.

I can understand wondering. Not being trollish, but we can make the same comparison about Nazi Germany prior to WW2 and what was happening to the Jews.

It's quite possible that if you heard news like that today, you might question if it's real or propaganda.

All that I can tell you is that defectors from NK pretty much have the same story, and it's not a good story at all. Many countries around the world have spoken up and protested about NK's treatment of their own people and human rights violation, so it's not just the US.

NK's government is based a lot on the old Soviet type of communism....except that it seems to have become more of a "hereditary" thing (Kim Un assuming power after his father). That type of government system tends to fail it's people, it becomes mostly a military power and police state, in which most of the people live very hard lives.

If their system of government was more like China's, they might actually be doing very well economically in many ways like China has over the last couple of decades.

I really don't have a problem believing the horror stories as most countries that have a despotic ruler and rule with an iron fist, the people suffer greatly.

Military: There is no way for anyone outside of NK to be sure of what NK is capable of. We can use spy satellites, covert intelligence, etc, We could make some very good intelligent ideas about what NK can or can't do.

Then again, overwhelming numbers can help defeat anyone who underestimates them.

But!........That's if it were a ground war. I seriously doubt other then in South Korea, we'd put boots on the ground at the beginning. More than likely it would be a carpet bombing campaign, cruise missiles, jets and drones

The bad part would be for South Korea (and trust me, I feel for them. I lived there as a kid in the mid 1970s), if NK's art guns can't be taken out quickly, and if Kim used that huge army of his to just over run the border.

Of course then again, Kim might not want to do that (push his army south). I've not seen it discussed here on ATS, but just think of the reaction of those solders as they push south and see just how easy and great life for people in S. Korea is.

It just might be that they yank out a white flag and surrender, hoping for a better life. Who knows?

Thanks for the detailed response. Very good points.

That clip you posted doesn't jive with this here clip, which portrays the US, and the rest of Western society, in a 80%+ similar view with which Conspiracy Theorists view.

Your video is a fake, the voice-over was invented by a British funny man travel writer. I'm sure the actual translation is similar, but a bit less ridiculous.

I keep wondering about their capabilities too, but I think the worst case scenario would be their actually managing to hit a US city with a nuke, in addition to bombing Seoul. Which would be horrible, of course, but it wouldn't be in the interests of the regime. I don't think anyone wants war right now, it's just that talking about it helps both Trump and Kim look good in the eyes of their peoples.

Keep in mind that people can privately travel to NK and see for themselves. Even the polished 'Potemkin villages' they put on display are pretty sad compared to western standards. And in addition to that you've got accounts from defectors. North Koreans can't freely come here and see for themselves, and they only have state-controlled news. It's totally different.

And I don't see why they would have kept some kind of secret weapon hidden. Everything they do seems to be for propaganda, to prove how strong they are. Sun-Tzu said to act strong when you are weak, and vice versa.

Yeah, I think people might be underestimating him. He's just so easy to make fun of. And even if he is a fool, that only means someone else is likely to be pulling the strings, one of his relatives or advisors.

originally posted by: Crumbles
a reply to: gortex


They have the capability it's debatable whether they can miniaturize it and produce a viable warhead.

Overhead imagery, ISR missions, and even people going into the country on regular visits. We don't know everything they have, to the exact detail, but when your best aircraft is a few MiG-29s, that might have been modernized, then you can make a pretty good educated guess as to what they have.