Anyone else wish they could live in a different time period?

originally posted by: toysforadults
They both normalized and experienced the idea of middle class lifestyle and retirement and destroyed it at the same time.

Of course, nowadays they sell "active retirement." They sell a vision of you and your old lady, white-haired, healthy and happy, dressed in white linen and riding bikes along the beach without a care in the world. Why? So we'll pump a lot of money into retirement funds! Never mind that the real retirement that most of us will face will be failing health that drains away our savings and leaves us to die on some cold hospice.

Above all, everyone should frequently ask themselves, "What are they trying to sell me, and why?" 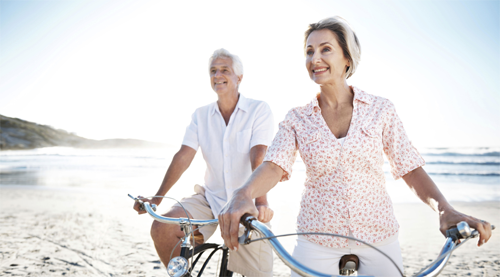 
Greetings- Maybe You did or You will?.. Perhaps 'time' isn't on a 'time spiral' and everything that happens, happens at the same time? If it was indeed, 'non-cyclical' then the old adage "Those who don't remember history are doomed to repeat it..." finally makes sense.

Maybe it is like a video game that goes on forever, and when You have enough "credits" You get to play amongst the stars and live in the time period in which You wish. If You don't have enough credits then You get a 're-boot'. If You are/were an immense turd and did a series of murders (serial murderer) then You get to work that 'bad medicine' off by being "little Jimmy, the little guy that everyone loves but dies of cancer" then 'Dinesh', the little guy that gets run over whilst trying to save a sacred cow in a back alley in Mumbai, then another tragedy that SHOULD work on folk's empathy...

Stay Hydrated while You're cruising 'round in that, there 'vessel' ... "You are NOT Your body..." Jesus The Christ.

I really like the times we live in.. but..

I'd prefer the early 1900's when there was more left unexplored and un-invenmted, so I can brave new bounds

posted on Jun, 30 2017 @ 07:17 PM
link
Yes. I would quite enjoy being born in a fairly wealthy western family in about 75 years from now. If its a real wish though, I would like to simply remain alive and rejuvenated enough to enjoy what the future holds. My concerns are less than my optimism as to what future society will look like. Envious of all the fantastic tech and knowledge they will simply be born into.

make it GO AWAY. imo politics do not belong here.sad as it used to be such fun and interesting
so many members have abandoned this site because of the politics.
I now just pop in but no longer stay the length of time i used to,It's depressing and so so boring.

edit on 30/6/2017 by stealthyaroura because: ban politics here please

posted on Jun, 30 2017 @ 08:09 PM
link
I wrote a book names 'Courting Calamity'... The life and times of Calamity Jane.
After all the research?
Yeah, that is where I would want to be.
Sometimes I can even feel it in my bones.

In the workplaces and the top deck of double decker buses, people smoked cigarettes. Still remember trying to breath in deeply, hold my breath and walk to the canteen queue through the dark blue smog of cigarette smoke and order a somewhat suspiciously looking stale sandwich with the corners turning up. The common rooms had industrial strength extractor fans. Turn these babies on and the cigarette smoke in the room would disappear upwards like a Stephen King horror movie. Even up to the 1990's, eating areas in workplaces and universities were still smoker zones.

posted on Jun, 30 2017 @ 08:41 PM
link
Midevil 12 th or 13 century ( yes king ? my name ? well just call me Merlin .
Gun powder easy enough - Steel ( not iron that is what they had )
just grow a few chickens in a few chicken generations have 7 eggs a week . 1.5 a week was good btw )
make a bee hive ( they loved med but just chopped up the bees trees .
OOO what else would have been easy ? A morcimic plow - and reaper .
A wheel barrel ( yea the little things incress the food supply and every one loves you lol .
Water steel swords and armor . Buddy go chop every one up lol .

The smoking thing was outrageous, even by the standards of the day. My lower school (for US readers, education between the ages of 5 and 9) was opposite a village post office, and they still sold individual cigarettes, a practice that seems to have died out in the 1960s everywhere else. This only encouraged naughty children to try to slip out of school grounds during 'playtime', buy a cigarette, and smoke it rebelliously.

I have no recollection of the above feat ever being pulled off by any of my schoolmates, but it was a regular source of planning and plotting. The rest of the time, we made do with pretending to smoke paper drinking straws (or occasionally buying 'sweet cigarettes').

Well into the 1980s, our local Debenhams department store (a chain which was then considered quite upmarket, and vaguely foreign in some mysterious way) was a smoking-friendly establishment. The only place you weren't allowed to smoke was the customer service elevator - there were those tall and elegant ashtrays-on-a-steel-pedestal, one on either side of the lift's doors, on each level, so you could politely stub your smoke before entering.

The open-plan office I was working in until 1997 was a smoking-friendly one, and so were most cinemas. We knew the tide was turning, though, in the mid-1980s when smoking was gradually restricted to the seats at the back of the auditorium. so punters didn't have to watch their movies filtered through unexpected plumes of smoke drifting up into the darkness.

This verse from The Beatles' "A Day in the Life" -

Found my coat and grabbed my hat
Made the bus in seconds flat
Found my way upstairs and had a smoke,
Somebody spoke and I went into a dream.

- must be nearly nonsensical to anyone under the age of 30, because it seems to jump-cut from catching a bus to being back home again, since there is nowhere else you could go upstairs for a smoke.

posted on Jun, 30 2017 @ 09:50 PM
link
Why act like the ancients were dumb? I am sure they didn't have electronics and whatnot but there was still good healthy living.

posted on Jun, 30 2017 @ 10:17 PM
link
Society fell when the internet became more than a tool,but a requirement. Anyone remember when the internet/computers were for nerds? Take me back. No Twitts, no Kardashians, no fake everything, a lot less pull-string people.

originally posted by: BigBangWasAnEcho
Society fell when the internet became more than a tool,but a requirement. Anyone remember when the internet/computers were for nerds? Take me back. No Twitts, no Kardashians, no fake everything, a lot less pull-string people.

I would love to see what ancient Armenians would think about Kim Kardashian
edit on 7/23/2016 by Regalius because: (no reason given)

posted on Jun, 30 2017 @ 10:51 PM
link
Personally I like the time I grew up in. Seeing Bugs Bunny Road Runner show uncensored. First run of Star Trek. Man landing on moon figured out on a slide rule because calculators weren't around. Being the TV remote for my father. 70s music.

Yeah I would relive my life especially if I knew what I know now...

posted on Jun, 30 2017 @ 10:59 PM
link
Going back 5 years would be all you would need, if you could retain what you know today.
Then, after only a few years, you could buy and Island and do anything you want.

Period of intergalatic civilization. A lot of interesting aliens ( if exist ), intergalatic trade,culture,communication,literacy,art etc.. Infinity amazing planetary employment. Intergalatic travel and tourism. Not to mention freedom to mate with aliens either culturally or ethically based on mutual understanding with the aliens!!

I always dream of leading a squad of mobile suited heavily armed rangers into uncharted hostiles planets so that the settlers could be made aware the risk of venturing outside their human colonial settlements. At the same time, eager to conduct diplomatic relationship with more benevolent and intelligent ETs, to learn their nature, language, cultural, tradition and scientific discovery.

It will be fun. There are so much new things to discover and to learn, you would wish to live forever.

I wish I could live as myself in the time period just before I was conceived. Nothing is better existence!

posted on Jul, 1 2017 @ 02:08 AM
link
Excellent thread. Probably the 1960s due to the music, bit before my time but what a period for music. Society was progressing too while are industries and communities weren't yet being destroyed by Asia. A time previous? Possibly Being still British and experiencing the coming of Rome to our island and wondering at their new fangled imports they brought with them. Staight well made roads, excellent mettalurgy, central heating and excellent water supply, baths 😊 must have been mindblowing

posted on Jul, 1 2017 @ 05:18 AM
link
The 60s or 70s. Any earlier would be a no no simply because of modern painkillers. I just can't imagine what life must have been like in the distant past before they invented painkillers.

The future would be awesome though. I'd go for the future.