posted on May, 21 2017 @ 04:28 AM
link
North Korea has today conducted another missile test according to South Korea's military , the test was launched from Pukchang where a missile launch reportedly failed last month.


South Korea's Office of Joint Chiefs of Staff said the projectile was launched on Sunday afternoon local time. The test comes a week after North Korea tested another missile, which it said was a new type of rocket capable of carrying a large nuclear warhead.

Earlier on Sunday, the North's state-run media had said it would continue to launch more "weapons capable of striking" the US
www.bbc.co.uk...


The test comes after claims the North has released proof of a CIA inspired assassination attempt against Kim Jong Un.


The hermit kingdom claim Kim Song-il was lured into a plot to assassinate their tyrannical leader by the CIA and South Korea’s National Intelligence service (NIS) with a biochemical substance.
The footage shows the alleged terrorist claiming he had discussed ways of killing the cruel dictator with South Korean intelligence – including placing a biochemical substance in an air conditioner. The NIS has denied any involvement in the alleged incident following reports from the paranoid dictatorship.
www.express.co.uk...

posted on May, 21 2017 @ 05:01 AM
link
I may be mistaken but I read in a glancing drive by reading (someplace?) that they tested a re-entry capsule... First step to ICBM re-entry warhead.

The ballistic missile launched by North Korea on May 14 successfully re-entered the Earth's atmosphere, according to analysts, a significant breakthrough for Pyongyang's missile programme.

Defence officials in South Korea and the US have confirmed that the launch of the liquid- fuel Hwasong-12 was a success.

North Korea claimed that the weapon reached an altitude of 2,111.5 km (1,312 miles) and travelled a distance of 489 miles before breaching Japan's Air Defence Identification Zone and splashing down in the Sea of Japan.

Yes , the test last week was a successful test launch of an ICBM , the missile launched today is believed to be a medium range rocket.
Kim Jong Un is showing he is deaf to the threats from America and calls from the international community to cease his activities.

I look at NK leaders like they're the children of the world stage. They like playing with fire just like little kids do. They have little tantrums and like shiny new things. More importantly, they haven't truly realised that 'adults' are smarter and much stronger than them. So as long as they stay in their claustrophobic sand-pit they can throw sand at passing adults and yell a few names.

I hope the world leaders see them as kids too. Otherwise a fat little kid is soon to have their nose kicked in by someone who ought to know better.

I think the fact that he hasn't conducted the much expected and planned for Nuclear test probably bears that out , he wants to push it but not to far.


I think the fact that he hasn't conducted the much expected and planned for Nuclear test probably bears that out , he wants to push it but not to far.

It strikes me that NK is a perfect enemy. There are almost no international reporters in Pyongyang and the population has minimal access to the outside world (no mail, no phonelines, no internet).

The US and allies could bomb the civilians as well as military targets without being answerable to the world. Not saying they would, but pointing out there's a lot of leeway and deniability if a few missiles went astray.

The little fat guy should bear this in mind


LOL. Keep watching and one day, as South Korea or Japan burns and hundreds and thousands of civilians are dead from a North Korean Attack remember that discussion we all had when half the members on here supported doing nothing to stop North Korea.

Be careful of what you wish for.

originally posted by: gortex
a reply to: 4N0M4LY


Oh yeah im sure things are being done. The same tactics that have failed time and time again. Like I have stated before. The only thing a North Korean soldier/government official understands is a "bullet". You can't reason with them, you can't negotiate with them, you can't get them to understand the ramifications of what their actions cause.

It's a tough situation but a political solution is the only real option , a preemptive strike will anger China and provoke an immediate attack on the South and perhaps Japan.

Perhaps the new South Korean leader will be the key to easing tensions with the help of China but force really isn't an option.

Better to get it over with now militarily than later. The North Korean government only play politics in war, that is the only thing they understand. A blunt object sometimes require another blunt object to get the desired effect. Its only a matter of time before China/ US/NATO come back to their senses and realize they have been wasting their time with sanctions, embargoes.

A revolt from within the country itself is highly unlikely.

Kim would rather die by a bombing than halting his nuke project. I am interested to see how long it will be before something bad happens.
edit on 21-5-2017 by 4N0M4LY because: (no reason given)

North Korea missile tests are like watching a blind man nailing a free throw-near impossible to achieve but still possible. 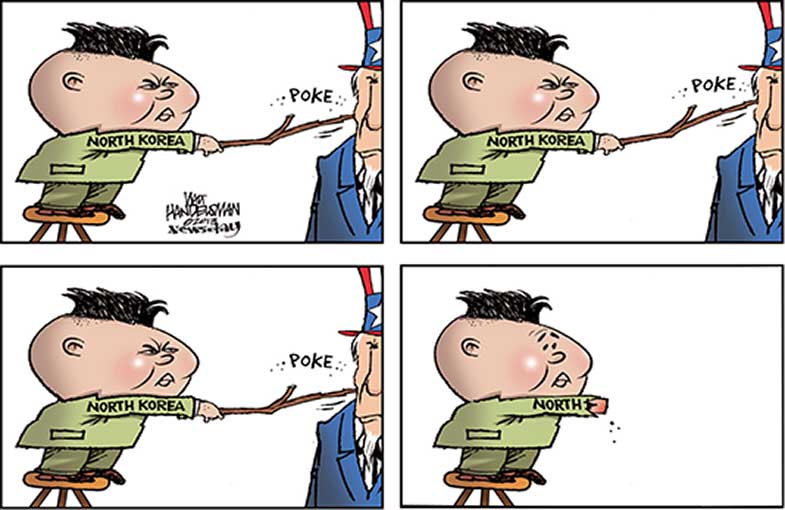 posted on May, 21 2017 @ 07:42 AM
link
Little fat Kimy's persistence without response or action from anyone will drive his ego and boost his confidence to the extent that believes he could get away with another nuke test! That will be the trigger for what is inevitable!!

China, Russia nor the US will not allow active nuke ICBM capability on the KP!! Period!!

China already put N. Korea on notice that if their actions (nuke / missile tests) provoke an armed response from the US / S. Korea / Japan it will not trigger their mutual defense treaty.

The Chinese people are tired of N. Korea. The new generation believes N. Korea is a drain on their resources and a danger to what china has accomplished (economy wise).


If we were to hit their air fields along with missile installations they would have no way to attack the South or Japan.

The problem is an estimated 13,000 artillery pieces on the NK southern border pointed at Seoul's 10 million people. Any incoming missle or bomb strikes against NK airfields and the artillery barrage is on.

First off most of the components come from China. If you think they didn't build in a "kill switch" with NK insanity well known you're mistaken.

Secondly the first country who bombs NK owns it.
Currently NO country wants or can afford to rebuild it. It really doesn't matter what Lil'Kimmy understands or doesn't. The fact is everyone else has a clue and is acting responsibly. Kim will act the fool for awhile, we get some military training out of it and Kim's back onto more interesting things like fine wine and the like.

Even Kim knows if he blows off a few nukes his arsenal is depleted and in reality he loses. He's got nothing after that.
If he does it's a fair guess he'll nuke himself when China detonates them prematurely, or they just tank back into NK dead as doornails. Worst case is they come down dead and China makes excuses user error or faulty maintenance and sells him MORE faulty parts that they control.


The Trump-hating media says that Kim Jong is giving President Trump "the bird" while he's in the Mideast. "A dozen times Kim Jong has tested President Trump this year. This time to steal limelight and embarrass him while he's on an important overseas mission." - CNN