It's confirmed, the F35 sucks

I hate war but I do believe in strong defense. Take that as you will.

From concept to now it has been 20 years!

In 1997, Lockheed Martin was selected as one of two companies to participate in the Joint Strike Fighter concept demonstration phase.

Lets put them in the same fleet as Australia's Collin Class Submarines..... we'll make an army of underdogs.....

Just dont give either to NK 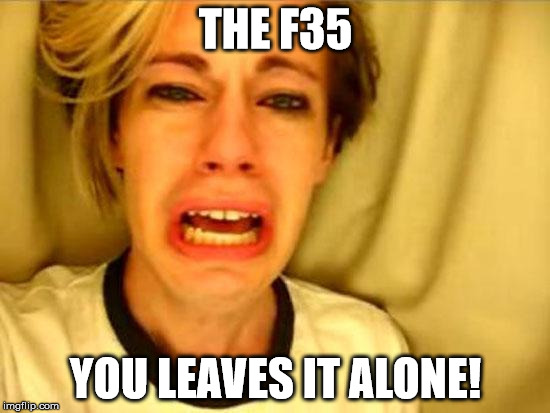 I hate war but I do believe in strong defense. Take that as you will.


One leads to the other, or tyranny and suppression at home. Founding Fathers understood the dangers of standing armies:

A standing military force, with an overgrown Executive will not long be safe companions to liberty. The means of defense against foreign danger, have been always the instruments of tyranny at home.

Throughout all Europe, the armies kept up under the pretext of defending, have enslaved the people.

War is the parent of armies; from these proceed debts and taxes; and armies, and debts, and taxes are the known instruments for bringing the many under the domination of the few.

No nation could preserve its freedom in the midst of continual warfare.

You were wrong before and you're still wrong. What, you think the 8 million lines of code should have been done in 6 months? We're long past the time when it took a couple of years to develop an aircraft.

Don't count on it.

posted on Mar, 31 2017 @ 08:40 AM
link
I am still surprised by the biased reporting on this program. It's like some kids are mad that someone in their neighborhood got a new bike and they didn't.

The author of that article, leaps to so many conclusions and circumstances that are just plain silly.

Let me give you a scenario.
You're flying in your sweet A/A combat airplane, you detect an enemy fighter at about 30 miles away. You process all the info coming in that you have and determine that he's likely a bad guy. One of the last things you do is confirm that he's out there, where the machine says he is. When you look out the "window" you see a cool diamond, or pipper or box to help show you where bad guy is. But that pipper is big, and the aircraft, at 25 miles is literally, a dot. A tiny fleck out there in the sky. I used to turn down my HUD symbology to find the bad guy ALL-THE-TIME. Literally, almost every time I was looking out there to find the aircraft because aircraft small away are tiny, black flecks of sand. Yet the author makes symbol clutter out to be downfall of the sensor fusion inputs to the pilots. Geez, most pilots want different stuff up anyway.

Second scenario, the catapult launch. That video of the pilot bouncing around is more jarring than any of the 3 aircraft that I've launched off the boat in. (A-4, T-45, F-14). But his conclusion that cinching down your lap belts makes for a reach issue is a straight up lie. In an ejection seat, the part that holds you down to the seat is the lap belt, not the shoulder straps. The shoulder straps stay loose, unless you lock them in place. but locking them for the cat shot is silly because it's not going to stop you from bouncing up, just from leaning forward. Trust me, even with the lap belts really tight, and the shoulder straps locked, you can still reach the ejection handles. There about 3 inches from your balls. Just silly.

I couldn't even make it to the end of the article, because it was ridiculous. Like "Battlefield Earth" ridiculous.

Throw on top of that, that I just had dinner with a friend, a former AV-8B Marine corps squadron CO, who now works the F-35 program, who said it's a great platform. And this guy would bash any airplane out there.

One of my favorites is "we've already spent a trillion dollars on it and it still doesn't work".

Roughly translated: If y'all want peace, be prepared for war.

It's a schoolyard axiom, but true enough for all of that. 'course, I'm just one of those "warmongers" someone mentioned.

Don't count on it.

I did say "looks good" Not a guarantee to BE good amirite? I like th enewers 4 packs of amraams that can be carried on hardpoints though. now if they made them able to tube launch they could squeeze in a few more. These new ones were to be flew in packs with the f-22s and 35,s. and are able to use the data collection from the f-22 without giving it away.

Still though its a gen 4 frame even if it is manufactured brand new.

They aren't building new ones, they're modifying existing aircraft with new radar and opening up two wing stations.

And the odds of it happening are getting slimmer.

Please don't tell us how good the F35 is, Please, you are scaring the Russians and Chinese reading this thread, it's much better to let the haters be heard. (the look of surprise on our adversaries face will be priceless)

They aren't building new ones, they're modifying existing aircraft with new radar and opening up two wing stations.

And the odds of it happening are getting slimmer.

Ahhh got ya. well its not like they coudnt put them on a B1 or on a f-22(after air superiority is established)

originally posted by: thedigirati
a reply to: Zaphod58

Please don't tell us how good the F35 is, Please, you are scaring the Russians and Chinese reading this thread, it's much better to let the haters be heard. (the look of surprise on our adversaries face will be priceless)

Crap DARPA has already showed them stuff that had the chinese delegates shaking like leaves and that was 5 yrs ago.

originally posted by: Zaphod58
a reply to: cosmania

One of my favorites is "we've already spent a trillion dollars on it and it still doesn't work".

If they want it to work. Spend another 6 trillion on it.

posted on Jul, 20 2017 @ 09:50 PM
link
The F35 is precisely what the EU deserves for having destroyed it's own industry during the 90s.
Now it can't even build a plane unless the US builds it for them. That's simply not gonna happen, F35 will never be operational and will only be something the EU tried to extort but never got!
Besides, why would anyone give the EU such technology? Why should a colonialist bunch of rejects get such plane?

It's funny to hear the Germans and French intending to build a local replacement for the F35. Why didn't they do that 2 years ago, when the US started to look into the JSF program.

Do you just make these things up as you go? Because pretty much everything you just said is so wrong it's not funny.

The UK, Italy, and the Netherlands are flying their own F-35s now, with Italy assembling them.

The German and French aircraft that they're talking about building has absolutely nothing to do with the F-35 and is a replacement for the Typhoon.

Nice try though, but maybe you should try spouting actual facts, instead of BS.