It's confirmed, the F35 sucks

And only the Marines CAN hover.

Why the hate on the F-35 program...? In my opinion from most important to least important:

- The F-35 original cost and timeline estimates were not accurate and were wildly optimistic. Instead numerous technical difficulties occurred which pushed the timeline out and massively increased the cost at taxpayer expense. The development timeline was also now so-long that the world has also changed since the program started, further throwing out the cost estimates. The aircraft is also tri-service with three variants, so some compromises were made (to what extent is not clear, since there are no other multirole 5th generation fighters), but this also makes development much more difficult and time consuming.

- Numerous technical difficulties such as: software stability, two engine fires, an ejection seat issue, hypoxia incidents, helmet mounted display issues, issues flying near thunderstorms, carrier variant hook didn't work, over-heating issues, insulation cracking, oscillations during carrier launch and so forth. In reality most of these were solved relatively quickly and despite all of them somehow the program has been performing close to its new schedule (after 2011 they re-evaluated the program and made many changes when it became clear the original program was not realistic). I can go into further depth. But the problem is, there's so many issues that you really need to pay attention to determine how far along the fix is. Often you see news articles citing issues that no longer exist. Due to concurrency, often many early aircraft still have not been retrofitted with fixes. For example, in Australia many believe the F-35 cannot fly near thunderstorms because our two aircraft have not been retrofitted with the fix yet, our 72 aircraft most certainly will have the fix when they are actually in Australia. Now that myth has morphed into the F-35 cannot fly in the rain. There are still many technical problems.

- The need for new fighter aircraft in the US and allied forces is extreme. The F-35 was supposed to be the new replacement aircraft, but due to many technical delays it is late. Hence, the degree of concurrency that is employed is very high. This means the aircraft is being fielded and produced in relatively large quantities (approximately 230 have been built so far) before it has completed development and started Initial Operational Test & Evaluation (IOT&E). Although concurrency is common in military procurement, the F-35 program takes this to a much higher level - the idea is that the customer can begin employing the plane sooner and build its force up sooner. However, there is also some risk that early aircraft will need significant modifications if a major issue during concurrent development is found. It was also discovered for example, that a light pilot could be killed if he or she ejected, but at this stage the aircraft was already in service. There are also theories that IOT&E is being sabotaged by the program, I don't know much more.

- Military reformists want the way procurement functions to be reformed. They will use the F-35 program as an example to justify their reasoning. I don't think they're wrong in that some form of change is necessary, but many arguments are rabid and not factual. I would put people such as Pierre Sprey in this category, who seems to think the best alternative to the F-35 is an aircraft such as a late 1970's F-16 (i.e. no advanced avionics, more maneuverability, low cost, high numbers). The article the OP posted certainly falls into this category. By the way, this group have been at this for decades, other programs they have dragged through the mud include the M1 Abrams and the F-22.

- Left wing wants to reduce military spending. Since half this website is dedicated to bashing "liberals", I don't think this requires further comment.

- Nationalists generally don't want an "international" program, they want 'murica to be #1, fast. That means restarting mythic F-22 production at the expense of everything else. This is because the F-22 is seen as being the most capable aircraft in the skies, by far.

- Idiot journalists who do not know how to do their job, or write articles that are aimed at riling up the public. These are usually hit pieces and contain errors such as "the F-35 cannot fly in the rain" or recently "the cost of the F-35 has increase by billions!" (when it's only a few percent, mostly due to the Air Force lowering buy rate from 80 aircraft per year to 60 aircraft per year, meaning production will go on for longer, and the figure was in then-year dollars, also the cost of fuel estimate had increased as well). Another recent one for the UK was claiming that the F-35 is more expensive than commonly believed, because the cited price did not include maintenance - well duh, and this is true for any system. Or journalists taking the claims of Russian and Chinese arms manufacturers at face value about "anti-stealth" "tech" (god I hate those words).

- Poor communications on part of the program itself, sometimes being dishonest. For example I've heard test pilots claim the F-35 is more maneuverable than any 4th generation aircraft. Rubbish! Some yes. All no. Boeing and Saab have also been borderline dishonest claims about the Super Hornet and Gripen, but the difference is the F-35 is massively over-budget at (american) taxpayers expense. The Super Hornet and Gripen aren't.
edit on 22/7/17 by C0bzz because: (no reason given)

- Myths about modern warfare such as - "we thought missiles were good enough back in the 60's! But then we kept getting shot down in Vietnam so we added a gun". In reality what solved problems in Vietnam was better pilot training and better maintenance, the Navy which did not add a gun actually had a better loss ratio than the Air Force, who did add a gun. In reality, the biggest factor in who won an engagement in the Vietnam war was actually situational awareness, which the F-35 excels at, while denying this to the adversary. Sometimes these myths go back to WW2, as if german tanks were somehow relevant to modern fighter jets.

- Big numbers about cost scare people. In reality, operating the majority of the fighter fleet for the worlds largest military out past 2070, in then-year dollars, is going to be freaking expensive. F-35 or not.

In all, the mistakes of the F-35 (or rather JSF) program should not be repeated. The video is former leader of the JSF program talking about it in retrospect. I think most of what he says would actually be agreed upon by critics and advocates alike.

My own opinion is that the F-35 is one hell of an aircraft:

It places emphasis on aspects which are important to warfighting in the 21st century while placing much less emphasis on characteristics that are not. In this respect it could be considered more 5th generation than the F-22, despite lacking supercruise. Further, while the program is about 15 years old at this point, I think some aspects of the concept are more relevant and important than anyone originally realized. 5th generation aircraft, for example, make 4th generation aircraft more lethal, which make 5 generation aircraft more lethal - they do this through stealth allowing them to get close to the adversary, advanced avionics to detect the adversary and fuse the information from multiple sensors, then advanced datalinks to send this to the rest of the combined force.

It's not "that" expensive compared to advanced 4th generation aircraft and is likely to be similar in cost to the advanced Super Hornet. Development cost has mostly already been spent, never going to get that money back, we can only look at the way-ahead.

Follow on modernization will continue for decades, keeping it relevant to the fight. Increased internal A2A carriage is being investigated, as are new more powerful and fuel efficient engines.

Despite compromises in a tri-service design, I think it's unlikely the USMC would get a STOVL 5th generation aircraft at all if it were not for the F-35.

International aspect of the program means allies of the US will be operating a common aircraft for decades to come.

I also see no reason why the USAF in particular needs so many different kinds of aircraft. Why does it need the A-10, F-16, F-15? Why do all of these and each subfleet need a direct replacement? The A-10 has been retrofitted with more advanced avionics, meaning it now often drops bombs from medium altitude like everything else does. What does a upgraded F-15 offer that a upgraded F-16 doesn't? Maybe it's a bit faster, carries a bit more, and goes a bit further? So what! You now have the opportunity for new dedicated, non-multirole, niche aircraft to enable the F-35, rather than direct replacements for existing aircraft.

I think it's impossible and a stupid idea that the F-35 will ever make up all (except the F-22) of the US fighter fleet as originally envisaged - that's a pipe dream. Instead you have a new high-low mix of F-35 (high) with 4th generation fighters (low). With a new system(s)-of-systems approach to augment the F-35 far into the future.

I think the problems will eventually be fixed and the early 2020's will be the years of the F-35. And according to the latest SAR, Block 3F (fully developed F-35 allowing full capability) is only weeks away, so parts of IOT&E can finally start and will be completed within 2-3 years.

Despite the failures in the original concept, original timeline, and original cost, surprisingly the world has progressed into a world that the F-35, as delivered, not as envisaged, will be capable, relevant, and cost effective. Continuing, albeit with caution, is the best option.

But do not ever repeat this debacle. It should have been better than it was and to some extent we got lucky. Or maybe I have drunk too much kool-aid.
edit on 22/7/17 by C0bzz because: (no reason given)

Are you referring to my post, or the OP? 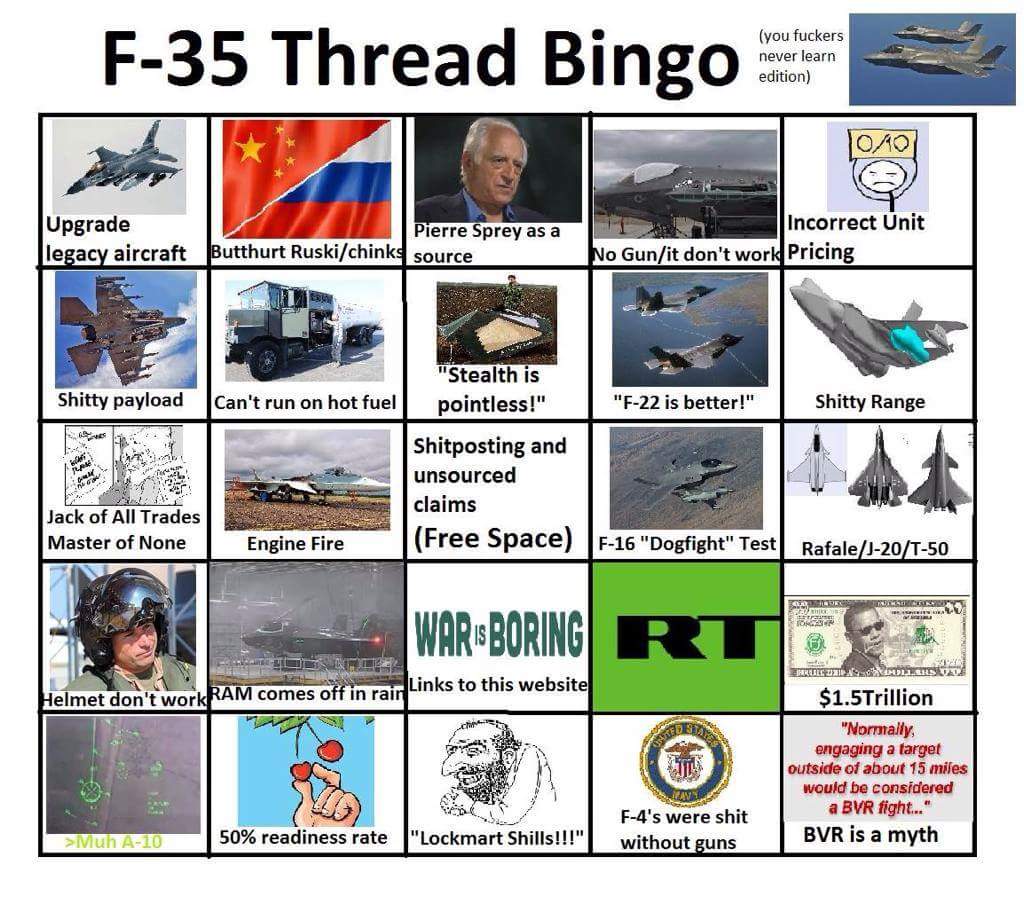 posted on Aug, 27 2017 @ 10:48 PM
link
I thought this quote was extremely interesting. This is Maj. Gen. Amir Eshel, of the Israel Defense Forces. He recently retired after 40 years, five of which he was in charge of the Israeli Air Force. He was asked about the F-35, and had some really interesting things to say.

A plethora of American media reports claim the plane is a white elephant that will implode, that the project is riddled with hitches and is the most expensive in history. And your response is “Nonsense”?

“[The Americans] embarked on something very ambitious in its capabilities. We already see what this plane has. Not everything is perfect. There are things you learn along the way. That’s been the case with every plane we acquired. But when you take off in this plane from Nevatim [base], you can’t believe it. At 5,000 feet, the whole Middle East is there for you in the cockpit. You see things, it’s inconceivable. American pilots who visit us haven’t seen anything like it, because they fly over Arizona or Florida, and here they suddenly see the [entire] Middle East as a combat zone – the threats, the different players, at both close range and long range. Only then do you grasp the enormous potential of this machine. We’re already seeing it with our eyes.”

Ahem the BRADLEY hasn't taken many hits and has had MANY upgrades to it's original aluminum /magnesium hull.