How Reliable is Climate Change Data? NOAA "Whistleblower" Speaks Out.

posted on Feb, 18 2017 @ 10:41 PM
link
The evidence is overwhelming that climate change is happening and that mankind plays at least some role in this from our carbon emissions resulting in a dramatic increase in CO2 levels in recent times.

What seems to be less certain is the rate at which these changes are occurring. Some data such as that previously collected by NOAA have suggested there may have been a "pause" in warming since 2000, while an NOAA "whistleblower" has made some criticisms about changes in NOAA data attempting to hide the "pause":

The climate change debate went nuclear Sunday over a whistleblower’s explosive allegation that the National Oceanic and Atmospheric Association manipulated data to advance a political agenda by hiding the global warming “pause.”

In an article on the Climate Etc. blog, John Bates, who retired last year as principal scientist of the National Climatic Data Center, accused the lead author of the 2015 NOAA “pausebuster” report of trying to “discredit” the hiatus through “flagrant manipulation of scientific integrity guidelines and scientific publication standards.”

In addition, Mr. Bates told the Daily [U.K.] Mail that the report’s author, former NOAA National Centers for Environmental Information director Thomas Karl, did so by “insisting on decisions and scientific choices that maximized warming and minimized documentation.”

“Gradually, in the months after [the report] came out, the evidence kept mounting that Tom Karl constantly had his ‘thumb on the scale’ — in the documentation, scientific choices, and release of datasets — in an effort to discredit the notion of a global warming hiatus and rush to time the publication of the paper to influence national and international deliberations on climate policy,” Mr. Bates said Saturday on Climate Etc.

To be clear, Bates is not claiming any data to be falsified, but the "thumb on the scale" idea is apparently related to changes in datasets which Bates apparently feels have not been properly validated, nor even archived and documented which should be a big concern:

“As a climate scientist formerly responsible for NOAA’s climate archive, the most critical issue in archival of climate data is actually scientists who are unwilling to formally archive and document their data,” he said on Climate Etc.

In his experience, the “most serious example of a climate scientist not archiving or documenting a critical climate dataset was the study of Tom Karl et al. 2015 (hereafter referred to as the Karl study or K15), purporting to show no ‘hiatus’ in global warming in the 2000s.”

NOAA did not return immediately Sunday a request for comment. The Daily Mail said that Mr. Karl “admitted the data had not been archived when the paper was published” but denied trying to influence the climate summit.

You can read the full article by "Whistleblower" Bates on Climate Etc here:

In the following sections, I provide the details of how Mr. Karl failed to disclose critical information to NOAA, Science Magazine, and Chairman Smith regarding the datasets used in K15. I have extensive documentation that provides independent verification of the story below. I also provide my suggestions for how we might keep such a flagrant manipulation of scientific integrity guidelines and scientific publication standards from happening in the future. Finally, I provide some links to examples of what well documented CDRs look like that readers might contrast and compare with what Mr. Karl has provided.

Apparently before Bates retired he worked for Karl, who demoted him and some have implied the demotion didn't sit well with Bates, however Roger Pielske also expressed concern about Karl's approach (from the first link):

Another prominent climate scientist, the University of Colorado’s Roger A. Pielke Sr., said Mr. Bates‘ experience was “consistent with my experiences” with Mr. Karl on the Climate Change Science Program in 2005.

“What John Bates has done is to expose this culture based not on robust science, but on promoting an agenda,” Mr. Pielke said in a comment on Climate Etc. “Regardless of one’s views on policies, the scientific method should not be hijacked as they have done.”

posted on Feb, 18 2017 @ 10:56 PM
link
My go-to source for climate change has always been the Berkely Earth Science project

They eliminated bias and poor quality stations in their study, which was a result of the koch brothers hiring a climate change skeptic to testify in front of congress in hopes that they could discredit the global warming claims to prevent a carbon tax that would hurt their business.

Funny thing happened, the scientist let the data inform his conclusion and he concluded that global warming is happening, the sun is not the reason, and until someone finds a better match for the temp data than the CO data, it has to be assumed human activity is driving it.

So if you would like to see the data with bias eliminated, have at it, it is all there for anyone truly interested in this topic.

originally posted by: Arbitrageur
The evidence is overwhelming that climate change is happening and that mankind plays at least some role in this from our carbon emissions resulting in a dramatic increase in CO2 levels in recent times.

You add the element of increasing CO2 levels and the GD'd Carbon Tax politicians were trying to use to get their hands on our wallets again ... just no. It's a lie.

Twenty years ago they were swearing there was an AIDS epidemic. Is everyone dead yet? Or did everyone switch over to safe sex?

originally posted by: syrinx high priest
My go-to source for climate change has always been the Berkely Earth Science project
..
Funny thing happened, the scientist let the data inform his conclusion and he concluded that global warming is happening, the sun is not the reason, and until someone finds a better match for the temp data than the CO data, it has to be assumed human activity is driving it.


The Berkeley data and all the other data presented at your source looks pretty flat to me from about 2002 to the latest data graphed which ends just before 2014. I copied this graph from the site you linked just now. Doesn't the data from 2002 onwards look somewhat trendless to you? 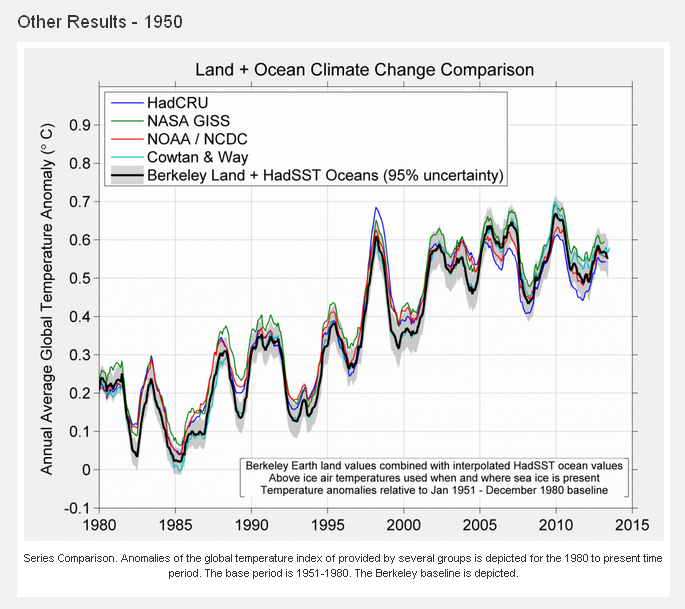 Given the data stops just before 2014 the NOAA data graphed in red is probably the "old data". The "whistleblower" Bates claims that in 2015 Karl introduced alternate data sources to eliminate the "pause", so if this graph were to be re-drawn with the revised NOAA data I'd expect the red NOAA line to appear somewhat higher, but even if you go by the black line which you say you trust, it does seem to show a "pause", doesn't it? It's allegedly the "pause" that Karl attempted to eliminate by changing data sets.

edit on 2017219 by Arbitrageur because: clarification

It looks like the revised data will be trending 12.7% lower. There are some questions and answers from Bates here;

Hopefully this is a turning point where dissenting scientists will come back into the fray. The conversation shuts down when everyone agrees.

Bates is backing off.
www.sciencemag.org...


Tuesday, in an interview with E&E News, Bates himself downplayed any suggestion of misconduct. “The issue here is not an issue of tampering with data, but rather really of timing of a release of a paper that had not properly disclosed everything it was,” he told reporter Scott Waldman. And Bates told ScienceInsider that he is wary of his critique becoming a talking point for those skeptical of human-caused climate change. But it was important for this conversation about data integrity to happen, he says. “That’s where I came down after a lot of soul searching. I knew people would misuse this. But you can't control other people,” he says

originally posted by: D8Tee
a reply to: Arbitrageur

Bates is backing off.

Please explain how that's backing off. He never accused anybody of falsifying data. What he accused them of was changing data sets without following proper procedures and he hasn't backed off on that at all as far as I can see. I don't think he's backed off one bit.

Did you see the post on this very subject just a few posts below yours in this same forum?
Bates comments about 'having the thumb on the bulb' suggested data manipulation.

The Berkeley group was not aware of the systematic issue in the ocean datasets. Note the black line is a combination of land data cleaned by Berkeley plus ocean "HadSST" which probably doesn't have the instrument correction.

I believe the instrumental issue is important and the corrections and datasets independently re-analyzed by multiple groups in an open manner.

The question of the degree of the pause or not is more academic relating to how well climate models reflect the deeper ocean turnover, which is known to not be entirely fully accounted for.

In any case, the pause is now since long over for 2016 and temps back on the uptrend.

And then there is the ocean non-surface (depth) heat content measurements which of course show uptrend barreling up without any pause.

posted on Aug, 2 2018 @ 11:21 AM
link
The EU is now manipulating the weather militarily to cause droughts in Africa and therefore increase the migrantion towards Europe. This is also used to give the impression that a man made global warming exists and is caused by CO2 and normal industrial activities.
EU's favorite trick for this summer seems to be the Hot but slow whirlwind. By establishing a whirlwind over a specific city, throughout the whole duration of the day, the EU can force this whirlwind to become very hot, reaching up to 50C.

This causes a self heating situation within a city area and leads to sustained high temperatures above 35C long after the peak of sun light is gone, and even after sunset to some extent.

Few people know that these phenomena are orchestrated by the European military forces and are primarily a weapon against their own citizens, especially children and the elderly

Top Republicans on the House science committee claim a former National Oceanic and Atmospheric Administration scientist “confirmed” that his NOAA colleagues “manipulated” climate data for a 2015 study. But that scientist denies that he accused NOAA of manipulating data....