originally posted by: watchitburn
If she ran maybe Howard Stern would run.

I bet he would win and we'd get to see her lose again.

At this point Kanye West would get the better shot!


He ain't form NYC, but then again she is also a transplant, but Kanye is a Trumpaphile and his ego is just as large.
Sigh!! on a serious note please go away Hillary a good boxer knows when to retire.


I hear she is a citizen of hell

That post was hellish, I was wondering WTF?? where is the rest of the sentence..

I guess if she finds herself out of a position to fleece the 'entire' country ... why not go for the next biggest financial target. Hell, NY voted her in once as a do-nothing Senator ... why not Mayor??

originally posted by: flyingdutchman2112
I would laugh at/pretty bad for NYC if it actually happened.

As another corporate insider with that kind of fee schedule
for standing up at a microphone; I'm surprised she's conducive
to that kind of pay cut for fronting the City of New York!

On the other hand, it looks like Pearl Jam got into the Hall of
Fame-- and Vedder would be my only other pick right now.
That'd be if the guys weren't still willing to gig... but y'never know.

What did Nelson Rockefeller say-- "Why would you want to be
Governor of New York, when you can be Mayor of New York City?"
Maybe Nellie was wistfully looking across the lawn at something
you could really hide stuff within.. maybe that IS Hil's thing now.

My stance, you Go Girl. Why be a US Senator when you can be the
queen of more gigantic slush funds than Cermak times twenty?
PS. All she gets is the NYPD. Good here, no red buttons.

originally posted by: VinylTyrant
Just what we need, another loser dem to divide us a little more.

What does she plan on doing with de blasio?
He's up for reelection soon. Not that he was any good at anything but being decisive.
Reminds me a lot of Obama.
Clinton should be happy with freedom and call it a career.
But I have to say, in NYC they LOVE her.
I don't get it.


She's got a hatpin and a phone. And DiBlasio is getting a lot
of bad press lately for everything between Big Gulps and
gun laws that are ham-stringing regular people worse than
Chicago.
PS Freedom isn't a cause for gratitude from HER: it looks like
more of an implied divine right. sigh

Gun laws have no bearing in NYC. De blasio will get a 2nd term. Mark my words. They should ve gone with Joe lhota, I would've liked to see the outcome of that. You. Know progressives, though, can't show them a good time with a low crime rate. No, you have to completely let the lower class run amok to have a clue.
Me, I like to rock my button down , sleeves rolled up under my Orvis vest puffin a LFD oro sippin on jim beam devils cut.
Just a civilized thing to do.

You are a good person, and You are awesome

originally posted by: Spider879
a reply to: visitedbythem

That post was hellish, I was wondering WTF?? where is the rest of the sentence.. 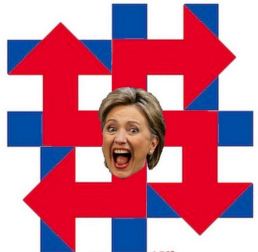 she has to have some office to maintain her status as an 'active politician' to keep getting money.
NYC being so democrat she could be mayor for life. and she know the press will be friendly (not much pesky Fox News)

maybe she's inspired by Rahm Emmanuel in Chicago.
at her level there isn't much she could run for without embarrassment.

years ago Merryland had a Baltimore Mayor named Don Shaeffer. He served two terms as governor (maximum allowed) and IIRC went back to Bmore and ran for mayor again.

posted on Jan, 8 2017 @ 08:14 AM
link
If NYC wants her, let them have her, It's not somewhere i will ever visit anyway, from what ive heard from people thats been there is that the place is absolutely filthy, With trash everywhere. I read somewhere that NYC is the dirtiest city in whole of the USA.

The question is what is it she wants from there, Will this position give her favours to sell?

The clinton foundation donations are apparently non existent since november 8th so i know shes been dreaming up ways to stay relevant and keep the millions flowing in ...

posted on Jan, 8 2017 @ 08:14 AM
link
Amazing that after the wringer she's just been through that she still feels a need to serve the pubic. Like she's done her entire life. Never a quitter. What a tough lady.

If this is true of course.

originally posted by: Sillyolme
Amazing that after the wringer she's just been through that she still feels a need to serve the pubic. Like she's done her entire life. Never a quitter. What a tough lady.

If this is true of course.

That or she need to be in a position to have favours to sell, She want the millions and she needs to satisfy her ever growing lust for power...

Right . It's expensive to even visit NY. let alone live there.

Lust for power that has kept her helping children and working for their futures since she was just a girl
But let's pretend YOU KNOW anything about her other than the smear and garbage on this website.
Ha you don't know anything about her.or her career. Obviously.

You have bad judgement, That has been proven.

You should listen to others on this matter, They know her more than you think you know her.

posted on Jan, 8 2017 @ 09:08 AM
link
If people vote for her it shows how far they have their heads up their asses after voting for Mayor McNanny and then corrupt Mayor Fattyboombah. I guess they want to find out what rock bottom is really like.