The Extinction of the Roaming Buffalo - A Sioux Tale 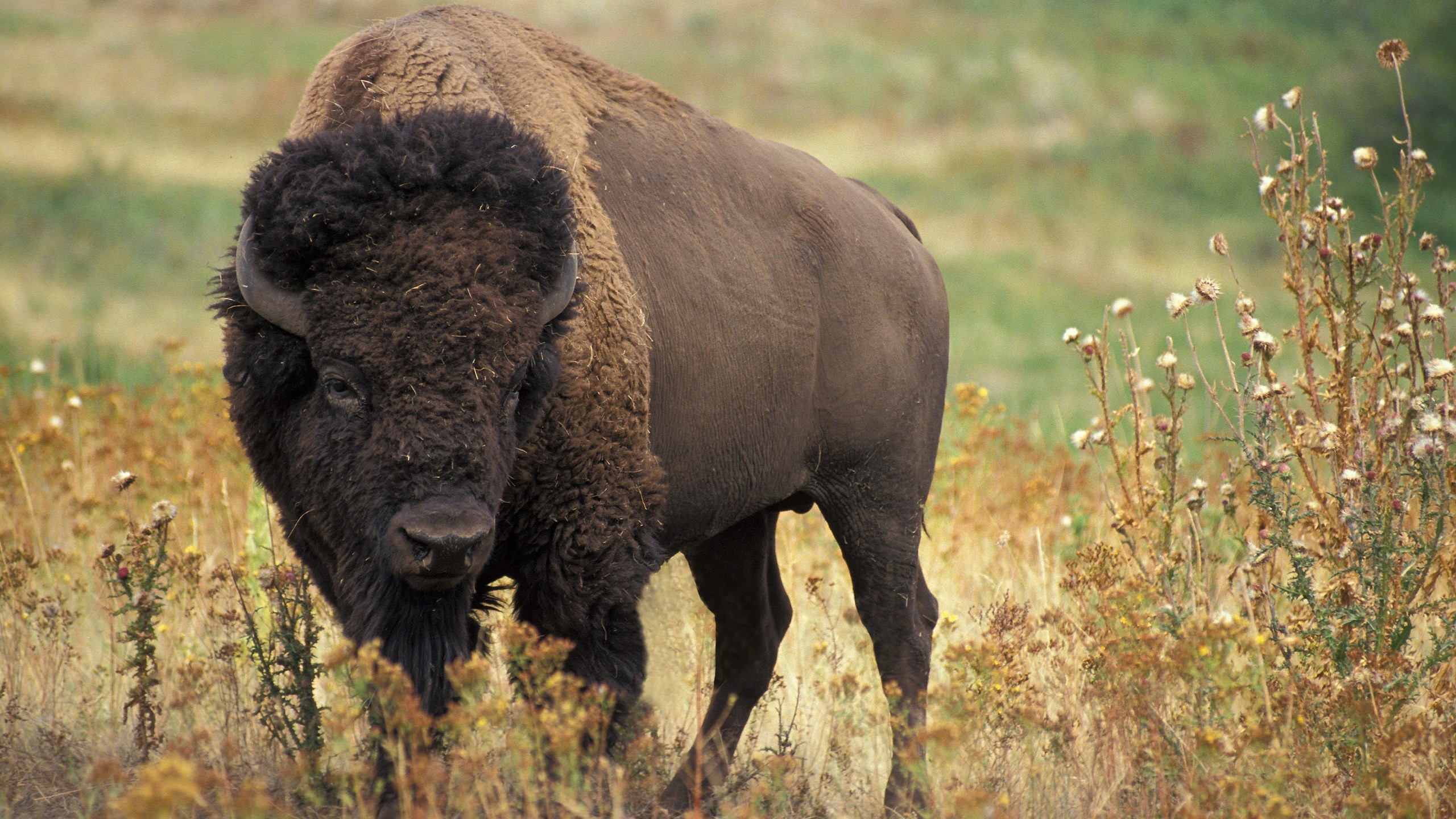 Listening to stories is an endeavor by itself for me, you can portray it any way you like with a subjective narrative, even call it the father of lies.
A few days ago i watched the story about Sitting Bull and his legacy, most of it are stories, but its stories that provides a legendary tale of a great man who lived his life the way he was taught..

I believe the story about the Buffalo roaming the great American plains and their almost extinction came at the hands of a merciless war between the Sioux and the White man.. They were merely caught in between, and just like history tells it; Cutting of food for a massive number of people will force them to their knees".
The years that soon followed there after, was just a story to fill in of Heroes slaughtering starving foes.

The story of the Buffalo is not just theirs, the story of the Wild Buffalo Roaming the great plains are just as much a Native Indian Heritage, they lived in harmony with one another and in balance with nature..
--

The American bison (Bison bison), also commonly known as the American buffalo or simply buffalo, is a North American species of bison that once roamed the grasslands of North America in massive herds. They became nearly extinct by a combination of commercial hunting and slaughter in the 19th century and introduction of bovine diseases from domestic cattle, and have made a recent resurgence largely restricted to a few national parks and reserves. Their historical range roughly comprised a triangle between the Great Bear Lake in Canada's far northwest, south to the Mexican states of Durango and Nuevo León, and east to the Atlantic Seaboard of the United States (nearly to the Atlantic tidewater in some areas) from New York to Georgia and per some sources down to Florida. Bison were seen in North Carolina near Buffalo Ford on the Catawba River as late as 1750.

The term "buffalo" is sometimes considered to be a misnomer for this animal, and could be confused with two "true buffalo", the Asian water buffalo and the African buffalo. However, "bison" is a Greek word meaning ox-like animal, while "buffalo" originated with the French fur trappers who called these massive beasts bœufs, meaning ox or bullock—so both names, "bison" and "buffalo", have a similar meaning. The name "buffalo" is listed in many dictionaries as an acceptable name for American buffalo or bison. In reference to this animal, the term "buffalo" dates to 1625 in North American usage when the term was first recorded for the American mammal.
--

The American Indian was dependent on the buffalo for survival. With the demise of the buffalo, the American Indian's life evolved into economic dependence on the U.S. government with cycles of severe poverty. The cooperative economic relationships of tribal societies that evolved with the buffalo culture became outdated in the competitive world of the white man.
1862, shortly after a failed crop the year before and a winter starvation, the federal payment was late. The local traders would not issue any more credit to the Santee and one trader, Andrew Myrick, went so far as to say, "If they're hungry, let them eat grass."

The reason why Buffalo were extinct comes down to plain and simple warfare, The US government, cut of the food supply to a culture that would not adapt to the unnatural ways of society. Years of conflicts ended with the almost extinction of the American Buffalo..

Ill end it with this quote; It is madness for sheep to talk peace with a wolf.
--

Shouldn't it perhaps be in Fragile Earth or *History or somewhere more appropriate?

I just don't agree that the 'pets' forum offers the exposure that a more appropriate forum would command.

@tn, i didnt know which forum i should post in, you are probably right..

originally posted by: tikbalang
a reply to: TNMockingbird

@tn, i didnt know which forum i should post in, you are probably right..

Either way, it is very good and I just wanted others to be able to read it. I'm afraid that a majority of folks won't come to the pets forum regardless of the title of an OP. I shouldn't assume, should I?

* I wanted to add that I've been enjoying your 'animal' posts lately and am especially fond of the elephants. I love those huge ancient beasts. There is a sanctuary not far from me that I follow regularly. There are live webcams to watch that can be fun in the summer. One must sign up a minimum of a year in advance to be able to volunteer there and if accepted, you are still not permitted near them. That's a good thing IMO. Anyway, sorry to ramble off topic...just wanted to share that while it was on my mind.
edit on 26-11-2016 by TNMockingbird because: *

They fed and clothed us for a few decades as we killed off their populations and overtook their migration routes. Crazy to think they went from possibly tens of millions in the 17th Century to near extinction in less than 200 years. 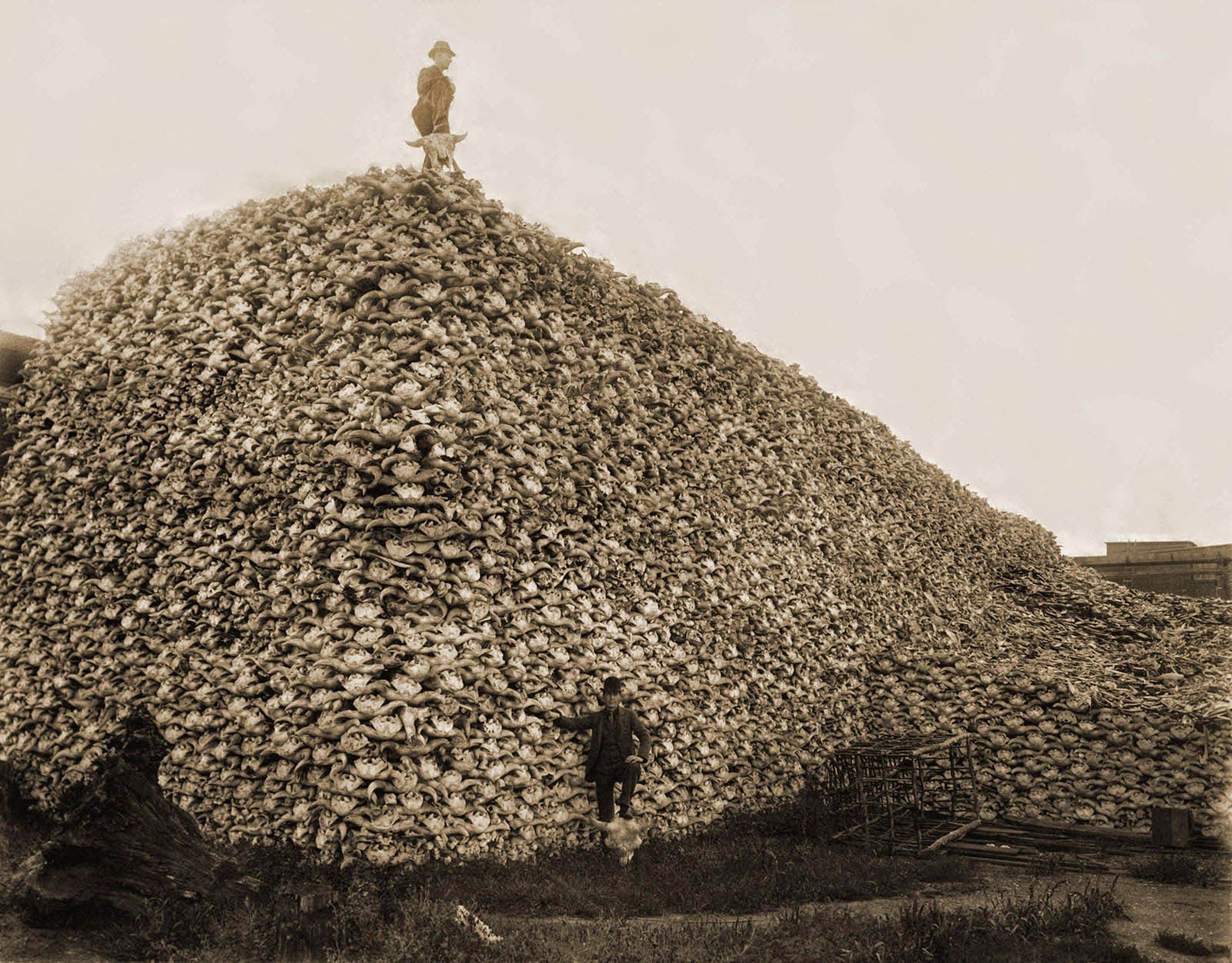 It's a sad page in North American History. One that should never be forgotten.

Thanks for reminding us of our past, perhaps one day we'll learn from events like these.

That is a crazy photo, unbelievable they ever did something to this degree without any regard to what it would mean for people or the land itself.

I saw it years ago and it's been stuck in the memory since. Just thinking about how many of those piles were around at the time is mind-blowing.

I've often wondered what a full monty bison migration would look like. Would the herds be visible from space? Imagine the sounds and smells of a million of them rumbling across the plains! All the attendant predators and wheeling vultures.

Damn! Must have been a hell of an ecosystem on the hoof.

posted on Nov, 26 2016 @ 11:14 AM
link
"This holy woman brought the sacred buffalo calf pipe to the Sioux. There could be no Indians without it. Before she came, people didnt know how to live. They knew nothing. The Buffalo Woman put her sacred mind into their minds."

No definitive version of the story exists. One should never be defined. The story shifts and shapes itself to the people, it grows and adapts. Through the oral tradition, it was handed down, and the story changed over time and will continue to change.

I agree, it would have been one of remarkable glory seeing live bison migration in this quantity. A phenomenal sight to say the least.

Visible from space wow you know i hadn't really thought of that, but it's true, it would be been one of pure amazement!