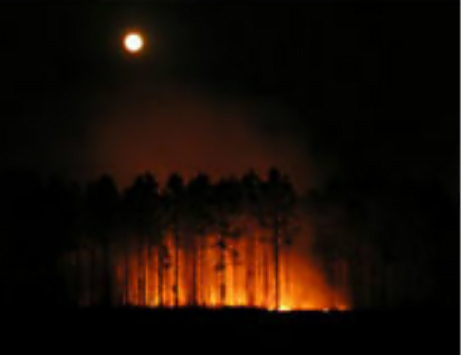 I'm spending the holidays with the family. And I was talking with my sisters about The Great Fire of Michigan. It is sort of a family ghost story for us. A tale we've been telling for many generations.

One of the driest summers in the Midwest, the fire grew quickly, rolling through the area at great speeds, leaving nothing but death and barren lands in it's wake. At the time, my parents house had two wells, located on opposite sides of the property. The house was occupied by a family of six. The parents and their four children. Having not heard about the great fire sweeping the land, they became surrounded by the flames. Unable to get to safety, the parents threw the children into one well, and they jumped into the other.

The whole family died that day. The children screaming for their parents from the depths of the well as they choked on the black smoke and the flames licked the sides of the well. The parents screaming from their well in despair and grief , listening helplessly to their children die. The whole family were never buried properly, the wells filled in with dirt and becoming their permanent graves.

It is said that every once in awhile, in the witching hours of the night, you can hear the tormented screams of the family as they yell to each other. The screams of the children carried by the wind through the walls of the house to their parents, and the screams of the parents carried back in response.

Sad story, I know.. but it is a ghost story. Anyhow, I was looking up The Great Fire of Michigan and found that it never was figured out how it had started. At the time, there were several small fires throughout the area, and it is said that the weather and dry conditions just caused them to grow out of control. 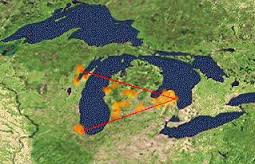 But...the Great Chicago fire also had started at that time. As well as one in Wisconsin over 200 miles away from Illinois. All three started on October 8th. There is speculation that all three were caused by remnants of comet debris that was falling to Earth at the time. Comparing the event to that of the Tunguska comet and noticing some striking similarities. more..

Still is a mystery that hasn't been solved that I know of. I've been reading through the eyewitness testimonies because, well, I find it interesting to hear the accounts of people who actually lived through it. They are like ghost stories in and of themselves.

Six Were Found Dead In A Well: In Marion Township six were found in one well and seven in another. There are many reports of death in the northern part of Forester Township-but the names of the dead had not, as yet, been ascertained. An older man named COLE, living northwest of Port Sanilac, was burned to death. Dr. A. E. HOYT of Port sanilac, braved the flames and with medicines and bandages made his way in to the country north and west of the village. He reported many burned fatally. He found seven dead bodies at the Ridge schoolhouse. In Marion Township the family of one RICHMOND, six in number, were found dead in a well. And another family name unknown. Rev. W. E. ALLINGTON of Port Sanilac, found 16 dead bodies near Deckerville. In Paris Township the wife of John FLYTEWAGER, and his seven children were burned alive. Fifteen others burned to death near Parisville. The DAY family and Morris CLIFFORD and his wife and child. Mr. PAINE, of Sibley, was burned to death. [The RICHMOND family above referred to were near neighbors of the present publisher of the Tribune. The whole family dove in to a new 12 foot deep well with about two feet of water in the bottom. The top of the well was covered with boards and planks. These caught fire and while burning ropped down on the father, mother and five children. The baby, less than a year old, was drowned in the water. The father's head was partly burned off. All were dead when found the next day. The RICHMOND's, however, lived in Delaware Township instead of Marion. The family consisted of the father, mother and six children. The oldest boy, 12, was away at a neighbors and was the only member of the family left alive.--Editor]

An eye-witness describing the destruction of Holland says that in the short space of two hours, between one and three o'clock on the morning of October 9th, the devastation was complete.

As for my ghost story... yes, sometimes in the dark of night you can hear the haunting cries of the family that lost their lives that day. Am I sure that it is the cries of the family and not some nocturnal creature? No... but I do know that when I hear the haunting screams they make me think of the story. And the story reminds me to cherish the time I have here with my loved ones...


Note: There are two fires here.. one is 1871, which happened at the same time as the Chicago fires. There is also one that happened in 1881.. ten years after. I see that the testimonials are from the 1881 fire. So, I have mixed the two together unintentionally.. Sorry.. is the day after a holiday..but basic thread is still valid.. but the testimonials are from the 1881 fire..again I apologize

I find the idea of these people burning to death while at the bottom of a pair of wells, deeply questionable. Heat rises, and fire feeds on oxygen. It is probable that the people who died in those wells died of oxygen starvation, as the hungry flames above consumed all the air in the well, and were likely dead WELL before the flames ever reached them.

Yep. You are right.

posted on Nov, 25 2016 @ 10:58 AM
link
Very interesting and well written. I would just add that the Tunguska event did not take place until 1908 but that does not rule out something similar as a possible cause.

S&F. Beautifully written. Thank you so much for sharing part of your family history. What a sad and tragic story!

posted on Nov, 25 2016 @ 08:05 PM
link
OP, are you aware that the area you describe was stuck by a meteor or meteors ~10000 BC? All the Carolina Bays, from the east coast to as far west as Wichita, Kansas, are elliptical secondary impacts, and their major axes all point to the Great Lakes area.