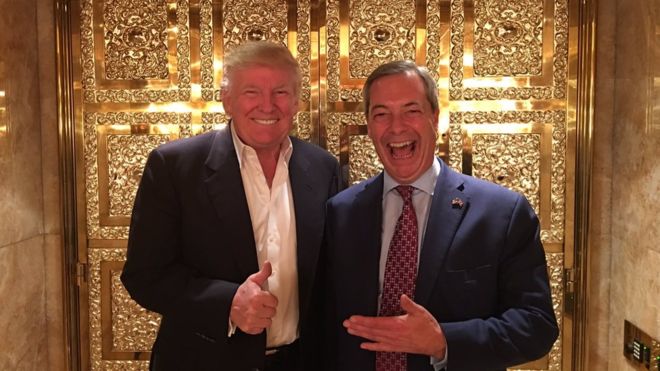 True to his word Nigel Farage jumped on a plane and headed over the pond to congratulate his mate making him the first UK politician to meet the future President.


Speaking after the meeting, Mr Farage said: "It was a great honour to spend time with Donald Trump. He was relaxed, and full of good ideas.
"I'm confident he will be a good president. His support for the US-UK relationship is very strong. This is a man with whom we can do business."


I wonder what job he will get ?

posted on Nov, 13 2016 @ 07:34 AM
link
Speaking for myself, I'm a little disappointed as this seems to completely remove both Nigel and Raheem from the future of UKIP.

I worry about its future direction under such people as Carswell and Evans.

originally posted by: gortex
Happy together.
I wonder what job he will get ?

originally posted by: gortex
a reply to: SprocketUK


I agree. Some of the stuff going back and forth between the NEC and the regions is mental right now. I know quite a few people who won't be renewing their membership.

To get back on point though, Nige had the courage of his convictions when he supported Trump so if he gets a job from it, it will be both deserved and beneficial for US and UK relations (as long as May listens to him too)

posted on Nov, 13 2016 @ 07:56 AM
link
a reply to: gortex
An excellent, symbolic, photo-opportunity for both of them.
Whether it means anything more is another question.

He's Donald Trump's mate , he also does a bit of politics in the UK.

originally posted by: Cobaltic1978
Apparently Nigel is hoping to become the U.S Ambassador to the E.U.

A Turd (farage) working for a turd (Trump) within a Turd (EU).

Next thing you'll have to say is that Farage is Nostradamus. He's not, he sells snake oil

Unlike Obama, who angered many in the UK by threatening them with going to the end of the line if they voted to leave the EU.

For all intents and purposes Nigel Farage is now the most powerful politician in the UK.
The govt are absolutely beside themselves and it is hilarious to watch.
I have a feeling the MPs in the UK parliament might just have seen their planned vote to block the people of the UK on BREXIT smashed into pieces.
Good 'ol Nigel can just ask Trump to deal on his behalf. No BREXIT, no trade deal
edit on 14/11/2016 by UKTruth because: (no reason given)

originally posted by: KEACHI
a reply to: gortex

The man who had worked for 25 years to achieve the greatest political shock in history - before Nov 8th 2016.

I don't agree that Nigel Farage is the most powerful politician in the UK though , Birds of a feather.