Ok So they just getting started. Getting in some stuff streaming through as it happens.
Some of the events coming through are making it online now.
Follow #MosulOps for more up to the moment documentation. The city is getting hammered hard!
Who are all the players involved right now for the battle for Mosul?? Iraqi forces backed by US and allied air support and a number of ground forces mostly spec. ops. (JSOC) Iraqi army and Peshmerga forces. 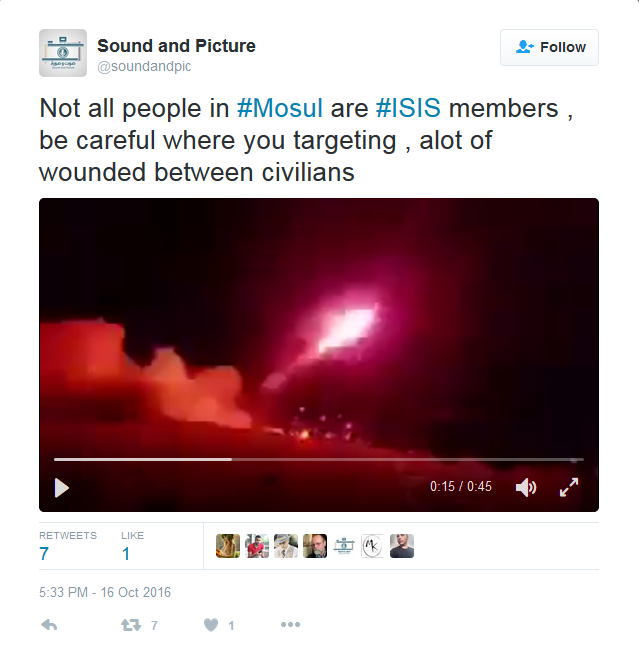 Peshmerga forces are firing artillery on ISIS positions
edit on 10-16-2016 by worldstarcountry because: (no reason given) 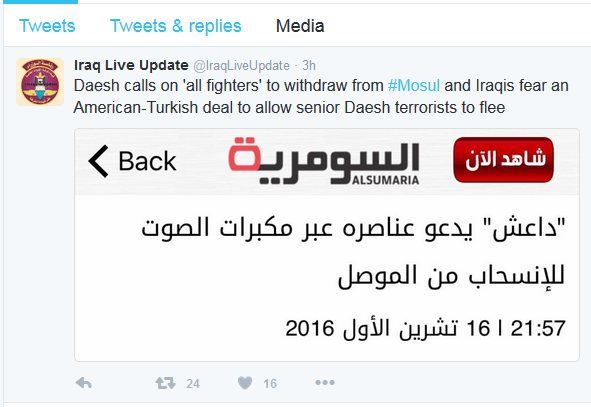 I see Daesh understands they will not come out victorious. Hopefully the rumors of amnesty for those who flee are nothing but unfounded speculation.

posted on Oct, 16 2016 @ 08:53 PM
link
Seen this piece of news through an organization I follow. Prayers for victory and the civilians.


Also some minute by minute updates on Twitter from @soundandpic. 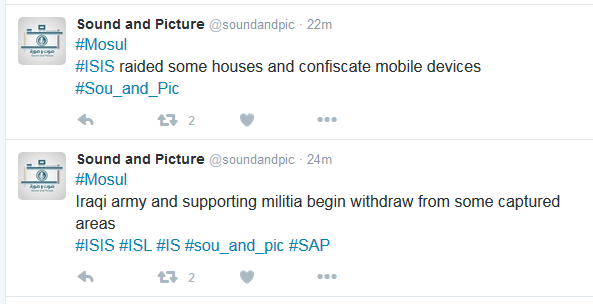 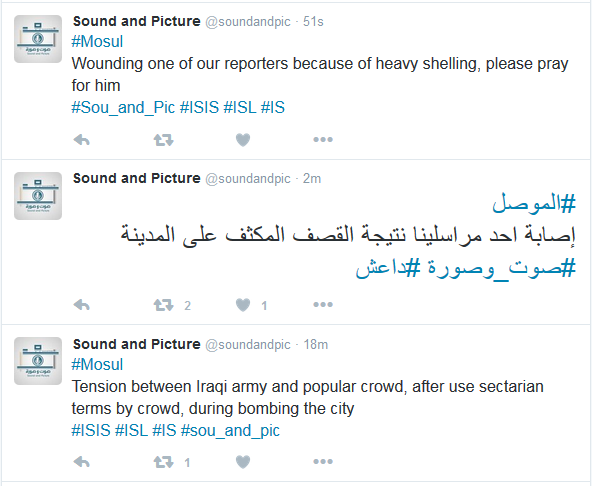 So we got some areas were captured by Iraqi forces but they had to pull a tactical retreat I guess due to some reinforcements from daesh and their popularity in that given area. Truly distressing stuff there.

Broken link to stream. I assure you some of us are watching! Just no input as of yet.

Stream has to be watched on youtube according to their settings, but it looks like they went offline. It was dark shot of the city and sporadic sound of gunfire. Something must of hit close to the source now that it stopped.

More updates can be found on twitter from @soundandpic and #MosulOps

Here was some first hand observations from a CNN correspondent a couple hours ago. 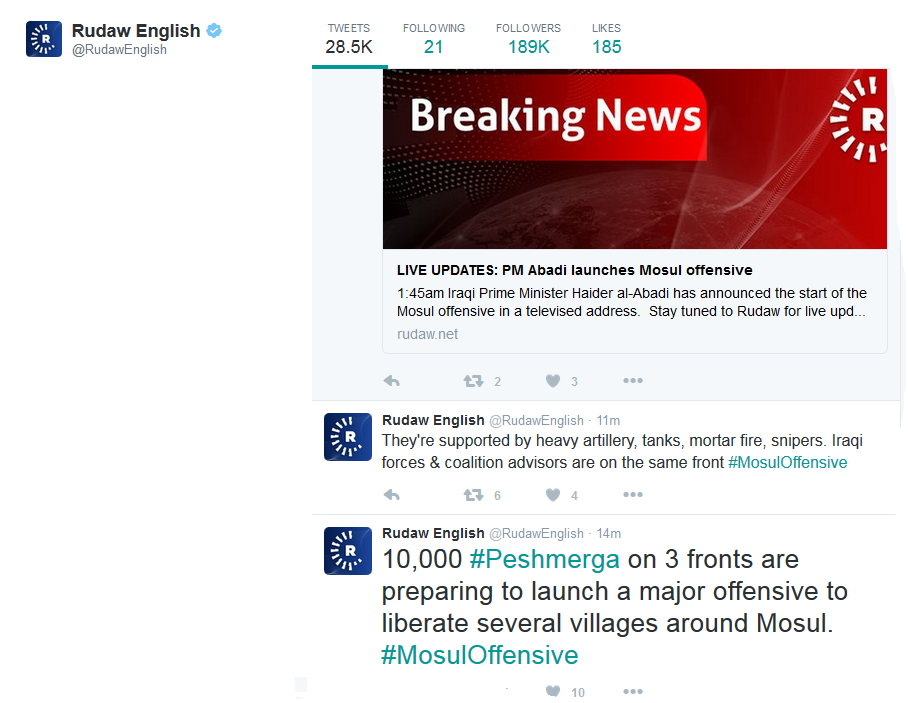 Peshmerga forces are taking on the bulk of the load if these reports are anything to go by.

#RudawEnglish is also keeping us up to date with latest happenings. I am going to take a break to buy some ice cream at the store, which feels totally insignificant considering their is a city under siege right this moment. Everyone else feel free to update anything you see.

posted on Oct, 16 2016 @ 09:53 PM
link
a reply to: worldstarcountry
Some serious as hell air support, American forces?? They speaking English.

It may be worth remembering the reports of the Christians and Yezidis who fled from Mosul who said their Muslim neighbours turned on them.

This may not be a population that especially wishes for life under the Iraqi government, the Peshmerga, the Turks, and the US Americans.

One more round of bombing and attacking Iraqis (by night of course), don't want to represent to clear a picture.

Maybe they could go play that background music in the local hospital emergency rooms.

Up wth the video game music, heavy on the tracer fire and boom, ping-pweee get them Mosuls.


#Peshmerga forces have broken the dirt mound barriers marking the frontline between them and ISIS. #MosulOffensive

and some French artillery attacks from earlier.

posted on Oct, 16 2016 @ 10:53 PM
link
They should start looking at life differently and valuing their servicemen's lives more than the civilians that are in the city. Most are collaborators at this point, a lot were indoctrinated or even got used to it and now help ISIS, even if they have to, and a lot of those women are their wives and mother's of their children or children to be.

I'd just kill them all in one fell swoop. The problem is the rest of the world would be outraged so it'll never happen. If it was done non-nuclear, non-chemical though, kinda like Operation Desert Storm etc, we'd totally get away with it.

posted on Oct, 16 2016 @ 10:55 PM
link
These Middle Eastern conflicts have been good for defense industry business and military science as they get the opportunity to test new devices, tactics, machines, and equipment in real battle situations, as well as gain new customers. Why end the party early?
edit on 10/16/2016 by r0xor because: (no reason given)

There have been reports of civilian uprisings against daesh scum in the city during the initial push earlier, and many people are reported thrilled and ready to welcome and assist the coalition forces approaching. 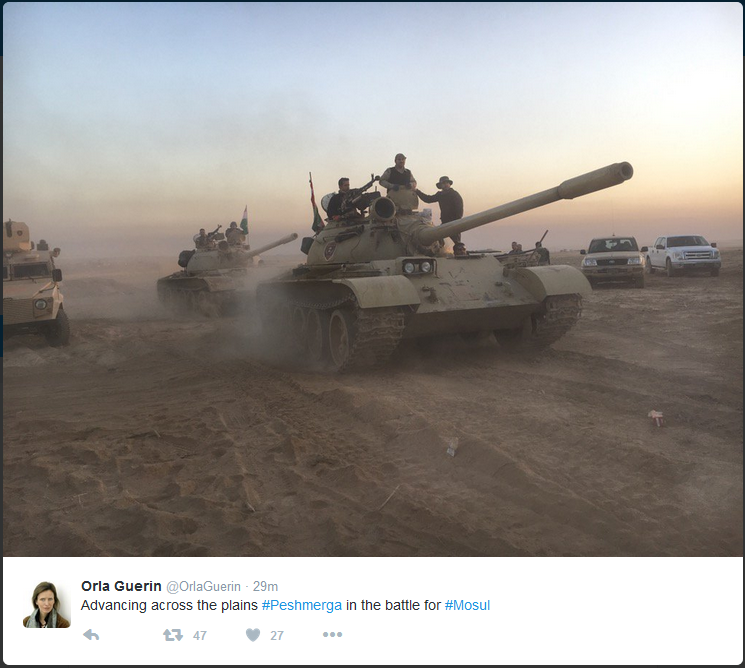 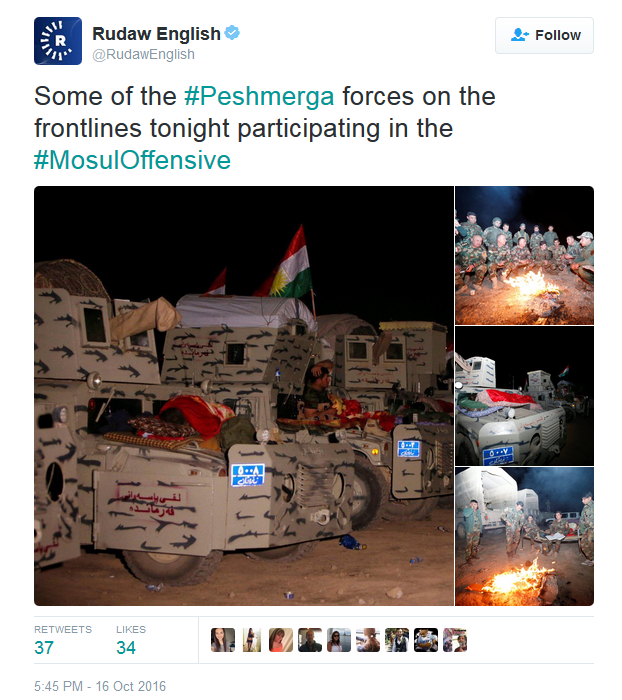 posted on Oct, 16 2016 @ 11:05 PM
link
I hate to go on a rant at midnight but, let's be honest. In America, I'm considered comfortable I guess. I have food, a roof, the internet, cable, a computer, a phone. No job, no car, no health insurance. There are people that value their pet's lives or even a wild animal that was killed in Africa and had a photo snapped of it more than my life or my wellbeing. The sad truth is that everyone who falls through the cracks or a loophole and anyone who doesn't get assistance from their fellow man to find a job and receive healthcare is less competition in society to look cool, get attention, have the nicest stuff, have women, have children, be admired or respected, and weild financial power. It's in your best interest not to help or care. Really, it is.

I truly believe that if people were forced to make a choice as to whether they had to save me, some other poor shmuck they didn't know, or a cute little kitty or puppy from dying with the premise being that they had to live with whichever they saved, they'd let me to fall to my death. I firmly believe that. If that is the attitude, the secret attitude of people towards each other in many cases, your only hope is to join them in a sense by devaluing their lives as well based on the things they are doing that are outright wrong, or even things you don't like about them, if you really wanted to stoop completely to their level instead of just flirting with it.

So I say, save the troops, kill them with the civilians that can't escape from the air in the most brutal air campaign ever seen in modern history.
edit on 10/16/2016 by r0xor because: (no reason given)

posted on Oct, 16 2016 @ 11:08 PM
link
They need to halt the offensive immediately. I'm circulating a petition on Facebook to SAVE MOSUL'S CATS AND DOGS.