A wine industry association. A plastic surgeon gifting nose jobs to kids. An artist who painted a portrait of Donald Trump and a blue dog. Trump-owned golf resorts.

Those are some of the beneficiaries of the Eric Trump Foundation, an eponymous public charity headed by the Republican presidential nominee’s third-born. Though Eric Trump—the executive vice president of development and acquisitions for the Trump Organization, and one of his father’s top surrogates and closest political advisers—recently claimed his father had donated “hundreds of thousands” to his charity, the only available evidence seems to suggest payments, in fact, went the other way: the Eric Trump Foundation (ETF) paying hundreds of thousands over the last 10 years to host lavish fundraising events at Donald Trump’s golf courses. 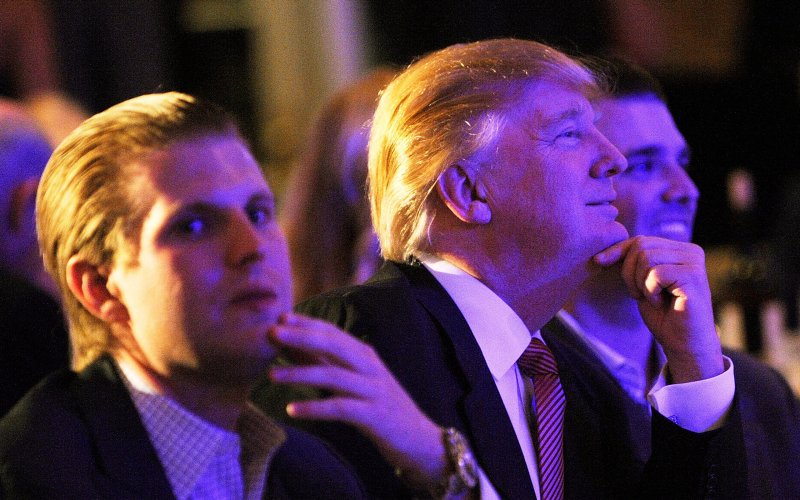 Please explain the difference of paying a family member to serve on a committee or board or foundation as opposed to using the golf courses one may own? Answer...NONE. Bernie did it...no one cared. Hillary and Bill and Chelsea use the 'larger' foundation for all of their travel.

posted on Oct, 3 2016 @ 05:59 PM
link
Trump could talk all the crap he wants to a Mexican judge, an Afghanistan Lawyer and a South American Miss Universe but talk crap to an Attorney General than he might find himself in jail after he loses the election.


I just wonder how much is going to be discovered about this man's slimy behavior in the last month leading up to the election. I can only hope it's enough for people to come to their senses.

That's kind of the appeal, easier to catch it, and easier to stop.

I don't think that compares to the Clinton Foundation. They've got paid staff.

Gotta have staff when you're selling off government positions, and allowing foreign states to have influence when you're Secretary of State...

My take on this Trump foundation biz is Who Cares!?

The AG is like a forum grammar nazi. Nobody likes him, ya know.

The hillary camp has been nothing but, "I know you are but what am I?"

I just heard her say Trump is disparaging all americans! WTF?!!

I really worry about what the dems have become.
When 1 party shifts so far to the fringe, it affects the other and that's why Trump is doing so well.

originally posted by: gunshooter
And it could've very well been an overlooked mistake by an employee in the foundation since I can only imagine the workload they must have to deal with. Not saying it couldn't be nefarious in nature, but at least give it the benefit of the doubt to see where this goes. I'm sure this will get cleared up, and the proper documentation will be handled on this.

The only employees are himself and his children. Again, it is NOT a real foundation.

originally posted by: matafuchs
To be honest...why did the AG not catch this before? Seems there needs to be some oversight in his department maybe....

If the numbers I heard on the radio today are accurate, there's 63,000 active charities in New York. These types of things probably don't get caught until someone digs into it after a charity makes the news. The past few weeks have had a lot of news about the Trump Foundation so the timing lines up.

posted on Oct, 3 2016 @ 11:00 PM
link
This guy should be nowhere near the whitehouse. I thought he was a business genius? Hilary has obviously been making alliances with the right people for the last 8 years, Trump has been making enemies and ripping people off.

What has Trump done? Nothing he has done nothing but gained hundreds of lawsuits against him by everyday average people that he's ripped off.
edit on 3-10-2016 by RedMenace16 because: (no reason given)

He has been breaking the law with impunity. The old orange dog must now pay the piper. Let's see how many 'billions' he has left if he paid back everybody he's cheated.

It certainly is nice of the press to not report any of that, and stick to him calling some woman fat, 20 years ago. Or....maybe they are just in his pocket.


originally posted by: imjack
a reply to: Indigo5

but what about Hillary?

There are literally two criminal complaints filed against Trump for the FL AG pay-off from the foundation...The pay-off they hid on their tax returns by claiming they gave the money to a charity that they never did. Those complaints filed a month ago haven't hit the grand-jury yet, but will in the coming months. Everything about the Trump Foundation is illegal and tax fraud...Just because the DOJ and IRS doesn't shout it, doesn't mean they aren't investigating and gathering evidence for a case now that all of this has been INDISPUTABLY exposed.

Say bro....don't bogart that joint! Dats gotta be some dank bud you smokin'!

And I don't hate him. I just REALLY don't want him to be president. I AM being honest about it.

Why can't people understand that?

Trump is a fascinating character. I don't hate him either.

I just think he'd be a disaster as president of the USA.


You might like the 70s mini series from PBS called "I, Claudius".
edit on 4-10-2016 by Enderdog because: Punctuation

About a dozen or more times which is less than normal.

That just illustrates that some people will look at the Douche and will conclude that, while not ideal or even desired, they can overlook some things in order to have the leadership they can more easily live with. And other people will conclude the same about the Turd Sandwich. So, some think Clinton is worse and some think Donald is worse.

I hope to God Trump broke the hell out of this law on purpose. No one in their right mind would ask the government for PERMISSION to raise money for charity. You don't need permission. No. I read through the first two pages and not one person said you're are against human rights if you think in America you have to ask permission FOR SPEECH. Solicitations are speech. In America, we have the freedom of speech. Those who do don't believe in the freedom of speech should be forced to move out of the country because they are a THREAT to us. I realize that other cultures and perhaps people in San Francisco don't care about freedom, but the fact is we cannot live a happy or fulfilling life without it.

No exceptions. When you have exceptions, you have a privilege not a right. I'm very disappointed this was not the first response, let alone something that did not appear on the first two pages. You do never EVER need permission from any government for ANY kind of speech. Anyone who even asks is a traitor to our values.
edit on 4-10-2016 by wayforward because: removed name-calling

originally posted by: wayforward
a reply to: Benevolent Heretic

Those who do don't believe in the freedom of speech should be forced to move out of the country because they are a THREAT to us.

On the other hand, I have found much to a full heart that there are more and more of the liberal side, that respect those of us who HAVE stood behind our principles on the conservative side, whether they agree with us on policy or not.

Wheat from the Chaff as they say


When conservatives anchor themselves to principles in an opposing tide of fear mongering and BS, it forces everyone who believes themselves to be principled, regardless of their political leanings, to stop and reflect and respectfully examine what those conservatives stand for.

The true fail with Trump supporters is the fact that "the Establishment", RNC et al are backing Trump.

Those opposed to a Trump Presidency are the "anti-establishment", refusing to sacrifice their principles for short-term convenience or at the demands and threats of the mob. Those conservatives bravely holding to their principles during the storm earn everyone's respect, regardless of political leanings.

I am a liberal, who in the past few months has read a great deal of conservative perspective from the anti-Trump conservatives, conservatives explaining what their principles stand for...and I read every word with respect and find their reasoning credible and have learned a lot...those conservatives have left me no other choice but to take them as credible and honest, even when I disagree...I am listening, interested and respect those views.

originally posted by: wayforward
a reply to: Benevolent Heretic

No one in their right mind would ask the government for PERMISSION to raise money for charity. You don't need permission.

No. I read through the first two pages and not one person said you're are against human rights if you think in America you have to ask permission FOR SPEECH. Solicitations are speech. In America, we have the freedom of speech.

Ummm... I think you better read up on the laws about running a charitable, tax-exempt organization in the US.

Those who do don't believe in the freedom of speech should be forced to move out of the country because they are a THREAT to us.

Yes, let's start kicking people out because of what they THINK!!! Good idea. Is that you, Donnie?

I'm very disappointed this was not the first response, let alone something that did not appear on the first two pages.

Well, most of us are a little more educated on what a charitable, tax-exempt organization is, and some of the laws and authorizations needed to run one. (Not an issue of free speech...)

And I don't hate him. I just REALLY don't want him to be president. I AM being honest about it.

Why can't people understand that?

Trump is a fascinating character. I don't hate him either.

I just think he'd be a disaster as president of the USA.


originally posted by: AndyFromMichigan
Funny how nobody had any problem with Trump's charity until a month before the presidential election.

Not true at all. Plenty had a problem. Someone just finally woke the eff up.


Yeah, I guess Democratic Hillary supports wake up when they're needed.

Do you even realize what a freaking joke you become everytime you use the "...but Hillary..." retort?